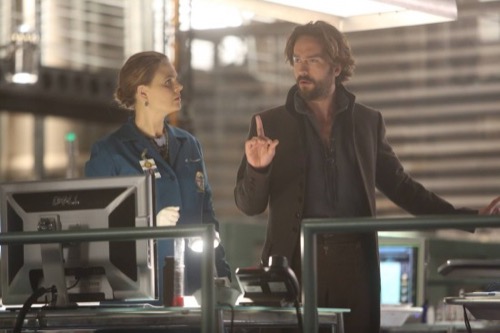 On the last episode, Abbie and Jenny worked together when Sleepy Hollow’s children were preyed upon by a monster. Meanwhile, Pandora outdid herself with her latest assault on the forces of good. Did you watch the last episode? If you missed it, we have a full and detailed recap right here for you.

On tonight’s episode per the FOX synopsis “the FBI is flummoxed by a strange death, but Abbie and Ichabod search for supernatural reasons to make their case to Dr. Temperance “Bones” Brennan and Agent Seeley Booth. Meanwhile, Pandora resurrects a British general; and the town is threatened by an army of undead soldiers.”

Tonight’s Sleepy Hollow Season 3 Episode 5 is going to be exciting, and you won’t want to miss it. So be sure to tune in for our live coverage of Sleepy Hollow — tonight at 9PM EST!

Tonight’s episode of Sleepy Hollow kicks off with a courier driver driving down a dirt road – he thinks he ran over someone and pulls over. It’s a trap, Pandora is waiting for him. She sends the courier on his way, and then opens the back of the van. Inside is a coffin, property of a museum, with General Wiliam Howe’s remains inside. Pandora brings him back to life and tells him that the “King needs his assistance.” Pandora tells him that his time has come, he can finally get revenge on Crane.

Meanwhile, Crane is at the bowling alley celebrating Halloween with Abbie and Jenny. They whine that he didn’t wear a costume – he insists that he is dressed as John Adams. Miss Corinth shows up, Crane is a fan of her costume, she is dressed as Betsy Ross. After he flirts with her, Abbie and Jenny tease him. Crane goes in to a speech about how Hallows Eve used to be a holy affair. Crane’s phone goes off – he learns that General Howe’s body never arrived at the museum.

A couple of kids are in a cemetary, egging the graves. They find an open crypt and head inside to investigate. Because, apparently they haven’t saw any horror movies – and it seemed totally logical to sneak in to a crypt in the middle of the night on Halloween. They run in to Wiliam Howe, who looks like some sort of creepy zombie. He waves his arm, and a whole squad of zombie soldiers walk out through the wall.

Crane and Abbie find the courrier’s van abandoned on the dirt road. Crane is certain that Pandora had something to do with it. They find tracks leading in to the woods, and they follow them to the cematery – he says that it was the grounds for a British battle site. The Mosoleum/crypt was built for all of the dead soldiers. They head inside and find the body of one of the teens. General Howe emerges with his zombie army, Crane and Abbie fire shots at them, but the bullets go right through them. So, Crane and Abbie have no choice but to make a run for it. Once the soldiers head outside in to the sunlight, they turn to ashes.

Back at the police station, Abbie stops by her Sargent’s office – he has been acting shady lately, she wants to know what he is hiding. He confesses that he has been working on a secret investigation, he says that an umbrella LLC called “Court MC” has been buying up shell companies and wheeling and dealing in stolen equities from countries like Iran and Iraq. He promises to include Abbie in the task force when the time comes.

Crane is pouring over the archives, he can’t find anything that would explain William Howe’s return from death – or the fact that he can’t be killed. Crane explains that he was once a great man, but he changed – and Washington sent Crane to kill Howe during the invasion of Manhattan, when Howe and his men took over the city. They find a note handwritten by George Washington, it says that the secret to defeat him lies in his primal tomb. That means that they have to find where General Howe was originally buried – and the secret to re-kill him will be there.

Crane and Abbie decide that they need the help of bone professionals to find the secret tomb – they pay Booth and Bones a visit and remind them that they owe them a favor. Bone and Booth get to work analyzing the coffin to see if Howe’s bones absorbed any traces from the tomb throughout the years that could give them a hint as to where the “primal tomb” was located.

Bones and Crane put their heads together and realize that the rock residue on the coffin only could have come from the Capitol Building. Bones informs Crane that there is no way he is going to an archaeological find without him. Meanwhile, Booth and Abbie are in the other room bonding over how much they miss Corbin.

Back in Sleepy Hollow, Corbin Jr. and Jenny are working on their own mystery – they are trying to figure out why the shard is so important. They manage to track down the woman that stole that shard from them last week. Joe tells her that he will give her the shard if she arranges a meeting between him and her boss Nevins.

Booth, Bones, Crane, and Abbie head to the Capitol Building – they sneak in to the basement and while they are snooping around Booth accidentally steps on a secret lever that opens up an entire wall. Crane and Bones wind up trapped on the other side of the secret door – and there are blue flames coming out of the ceiling. Meanwhile, Abbie and Booth shoot the lock on the magical door and get it to open again. They rescue Bones and Crane, and Bones is so excited about the archaeological find that she drags Booth off to begin excavation plans.

On the way back to Sleepy Hollow, Crane realizes that the reason they had blue flames in the tomb was because it is General Howe’s Achilles heel. Abbie says that it is no big deal, they can get some napalm. Crane says that Greek Fire is different, it can’t be put out with fire or sand, and that explains that “Great Fire Of New York” centuries ago. Washington set the entire city on fire to kill Howe and his zombie army.

Meanwhile back in Sleepy Hollow, Halloween has officially arrived, the kids are all out trick or treating. And, creepy Pandora is out meddling with the kids and stealing their candy. Apparently Pandora has a sweet tooth. General Howe joins Pandora in the park – she tells him that when the last sunbeam sets, he and his army are supposed to “go forth and slaughter.”

Abbie, Jenny, Crane, and Joe are coming up with a game plan. Crane volunteers to be bait – he knows that wherever he goes, the General will follow. Once they get them underground, they plan on napalming Howe and his army. They have to do it underground though so that they don’t burn down the entire city of Sleepy Hollow.

Howe and his army head out in to the park after dark, they are preparing to open fire on nearly 100 kids and Abbie and Crane show up and save the day. Crane is able to lure Howe and his men down in to an underground tunnel where Abbie, Jenny, and Joe are waiting for him with flame throwers. How doesn’t want to give Crane the satisfaction of killing him (again) – so he marches in to the flames willingly.