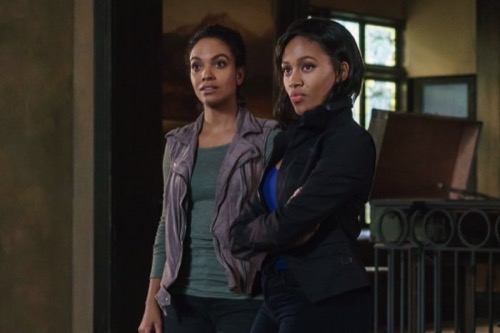 Tonight on FOX their mystery adventure drama SLEEPY HOLLOW continues with an all new Thursday October 22, season 3 episode 4 called “The Sisters Mills.” On tonight’s episode, Abbie (Nicole Beharie) and Jenny (Lyndie Greenwood) work together when Sleepy Hollow’s children are preyed upon by a monster.

On the last episode, fear was rampant in Sleepy Hollow when Pandora released an ancient artifact from her box that can transform an ordinary human into a terrifying figure from the past. Did you watch the last episode? If you missed it, we have a full and detailed recap right here for you.

On tonight’s episode per the FOX synopsis “Abbie and Jenny work together when Sleepy Hollow’s children are preyed upon by a monster. Meanwhile, Pandora outdoes herself with her latest assault on the forces of good.”

Tonight’s Sleepy Hollow Season 3 Episode 4 is going to be exciting, and you won’t want to miss. So be sure to tune in for our live coverage of Sleepy Hollow — tonight at 9PM EST!

Tonight’s episode of Sleepy Hollow kicks off with two little girls hiding out under a blanket and coloring, their dad comes in and tells them it is “lights out” and they are supposed to be sleeping. He tucks them in to bed and kisses them goodnight, one of the girls wakes up in the middle of the night and there is a monster lying on her sister and appears to be sucking something out of her body.

Back at Abbie and Crane’s – he is playing video games, but Abbie is trying to get him to study for his citizen’s test. They are arguing over whether Independence Day is July 2nd or July 4th. Crane argues that he was there, and the Declaration was definitely signed on the 2nd. Abbie changes the subject, she teases Crane about Zoey and asks if he is going to sleep with her. Crane denies it and says that she is just helping him study.

Abbie gets a phone call from Joe – he just rushed a little girl to the hospital (he’s an EMT). The girl was found in her bed in a coma in the middle of the night and they have no idea what is wrong with her. Joe thinks that Abbie should know about it, because her sister says that a monster attacked her in her sleep. Abbie and Jenny arrive at the hospital and introduce themselves to the little girl Saffron, they ask her about what happened the night before – but she won’t talk.

The next morning, Abbie and Jenny head to the house to look around Saffron’s room. Crane tags along to try and talk to Saffron and see if he can get any information out of her. While Abbie and Jenny are searching Saffron’s room – they talk about thier childhood. Abbie brings up their dad to see what Jenny’s reaction is, Jenny still has no idea that Abbie found him and is keeping it a secret.

Crane find Saffron in a tree house and tries to win her over with some magic tricks – but she isn’t buying them. Saffron finally opens up to Crane, she reveals that her dad doesn’t believe her and says that she is making up the story about the monster. Crane encourages her to draw a picture of the monster – afterwards they take the creepy drawing down to Abbie and Saffron informs her that the monster in the picture is the toothfairy.

OF course, Ichabod Crane remembers the monster – it reminds him of something that happened to Betsy Ross. Betsy’s nephew came down with an illness, she called on Paul Revere for help because he was a dentist. All of the kids in their town were falling in to comas after they lost their teeth. Shortly after Paul’s visit – the kid made a full recovery. But, he has no idea what Paul did to cure them.

They hit the archives, and learn that the monster is called the “Abyzou” and they use the open wounds in children’s teeth after they lose teeth to get inside the kids’ bodies and take over. They fully steal the childs’ body after 48 hours, which means that time is ticking for Saffron’s sister Tessa, she has already been in the coma for 12 hours. The only way to defeat the “Abyzou” is with silver, but it is tricky because he is invisible to adults – only children can see him. Meanwhile, another little boy is about to fall victim to the Abyzou – his mom tucks him in to bed and sees the monster in his closet, he has a loose tooth but he wouldn’t let his mom pull it out.

Abbie and Crane have a plan, they head to a local school to meet with the kids to try and see if any of them are going to lose any teeth – they meet Gregory, the little boy that is being stalked by the Abyzou. Later that night, they split up. Jenny and Abbie sit outside of Gregory’s house to keep an eye out for the Abyzou. Meanwhile, Crane and Joe go on a stakeout too – they are trying to get Paul Revere’s historical medicine bag from a museum.

While Abbie and Jenny are sitting outside of Gregory’s house – Abbie decides to come clean, she confesses to her sister that she found their dad. Jenny laughs, she tells Abbie that she found him five years ago – she just didn’t tell her because she didn’t want to upset her. Jenny scoffs that if Abbie wants to reconnect with their deadbeat dad then she can go ahead – but don’t come crying to her when it doesn’t work out.

Inside the house, Gregory loses his tooth while he is drinking a glass of water – the Abyzou appears and Gregory starts screaming. Jenny and Abbie make a move and rush to the house – but they cant see the monster, only Gregory can. While they are battling with him, they realize that when he gets sprayed with the sprinklers and gets wet – they can see him too. Jenny and Abbie manage to finght the Abyzou off and it disappears in to the woods. Jenny turns around and realizes that Abbie is lying on the ground and she is unconscious.

Abbie is rushed to the hospital, she is in a coma just like Saffron’s sister Tessa is. Jenny stays by her side at the hospital, and Crane heads to the archives to see if there was any information they missed about the Abyzou, something that can help them wake up Abbie. Saffron stops by Abbie’s hospital room – she cries to Jenny that the doctors said her sister isn’t going to wake up. Jenny comforts her and tells her how amazing Abbie is as a sister – she tells Saffron that there is no one Tessa loves more than her. Afterwards, a creepy nurse stops Saffron in the hallway – she tells her that she can save her sister, and gives her a tiny gold pouch with something inside of it.

Jenny heads to the archives and Crane is going through Paul Revere’s files and medicine bag. Jenny and Crane realize that silver weakens the Abyzou and shows its kill spot. So, they just need to find the Abyzou, douse it in silver nitrate, and then kill it.

Meanwhile, back at the hospital – the creepy nurse sneaks in to Abbie’s hospital room. She rubs Abbie’s hand and she wakes up. When Abbie opens her eyes, the nurse coos “hello sleepyhead.” She taunts Abbie and asks her what the one thing is that she could never bear to lose – Abbie won’t speak to her. The nurse talks to Abby about her father selling her in to slavery.

Jenny and Crane head out to track down the Abyzou, they track the monster in to the woods with guns that shoot silver nitrate.

They are basically shooting the silver in to the dark and hoping that it lights up the monster. After a brief struggle, Crane is able to kill the Abyzou for once and for all. Back at the hospital – Saffron’s sister Tessa wakes up from her coma, so does Abbie. She calls Crane and Jenny and tells them the good news – Saffron’s sister is safe!