So You Think You Can Dance Recap – Edson and JJ Eliminated: Season 12 Episode 12 “Top 10 Perform + Elimination”

BY Kristine Francis on August 17, 2015 | Comments: one comment
Related : Reality TV, Recap, So You Think You Can Dance, Television, TV 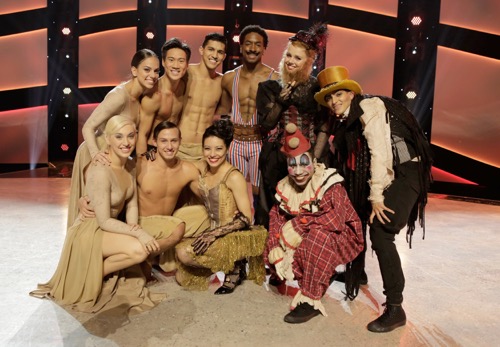 Tonight on FOX, SO YOU THINK YOU CAN DANCE continues with an all new Monday, August 17 season 12 episode 12 called “Top 10 Perform + Elimination”. We’ve got your recap down below. On tonight’s episode the Top 10 dancers perform, but the field is diminished by a double elimination.

On the last episode, the competition heated up with a double elimination as dancers from both teams fought to stay in the running to become America’s Favorite Dancer. Did you watch the last episode? If you missed it, we have a full and detailed recap right here for you.

On tonight’s show per the FOX synopsis “the Top 10 fight for their spots on Teams Stage and Street! See who makes the cut and who goes home as the competition heats up!”

It seems like every week now someone is injured. And sadly, this week JJ from Team Street was the one put on medical leave.

But, seeing as this isn’t the first time someone has had to sit it out, must of us know the rules by now. JJ will automatically be up for elimination next week. And with one member already, this is definitely going to hurt Team Street’s chances.

Apparently they were the winners this week and Coach Twitch naturally was really proud of his team for what they managed to achieve. Yet that doesn’t change the fact that this was a solos week and JJ’s absence will be missed.

The top ten on tonight’s episode of “So You Think You Can Dance” are going to be performing to the soundtrack from the hit show Empire throughout the episode. And really, when you think about it, Empire’s soundtrack kind of favors Team Street. No matter the genre of the actual song.

Thereby Team Street honestly didn’t have a reason to not be on form tonight. And luckily they weren’t for the most part.

Virgil was first up and he performed to the song “Conqueror”. A slow melody that he somehow was able to add certain amount of punch to. And, really, make it his own. Though it’s fair to note that I personally believe Virgil could do no wrong.

We all feel a particular way about a performer and Virgil is the one I’m betting on. He seems to me like he has the potential for being in the top two. However the same could be said about two other people. Both Gaby and Hailee.

Thus my dilemma. I can easily spot three people that could win it all. Yet there’s never been such a tie like that in “So You Think You Can Dance” history.

Hailee had followed up Virgil’s routine with a jazz duo with the lovely Brandon. And recently she’s been doing nothing other than hitting it out of the park lately. Time and time again, Hailee has wowed the judges time and, like Virgil, she’s been impressing the audience as well. So there was no surprise that she was safe this week.

Yet Gaby is different case entirely. She wasn’t a slow burn like Hailee. She simply came out and threw everyone for a loop.

See Gaby is the tapper by nature. So, at times, no one would have believed she could fit into either Street or Stage. But as it turns out she’s capable of keeping up with both teams and she proved that very nicely tonight when she tapped to “Can’t Trust Emm”.

Though the Empire solos have actually been pretty good across the board. Neptune danced to the “Power of the Empire” and, liked I guess it, it was a song right up his alley. Just as “Keep it Movin” was a perfect fit for Jaja.

Derek from Team Stage, on the other hand, had tried to step outside of his comfort zone and pull off sexy. Although being sexy is pretty hard. Especially for a guy that constantly second guesses whether or not he can do it. Which you could see by the way as he was dancing.

So this week Derek danced a sultry number with alumni Kayla and unfortunately the only one that had turned up the heat on this one – was her!

The judges liked a few things they saw in the dance but he could have put more confidence in his dance. And this isn’t the first time that he gotten this criticism. So Derek ended up being one of the Stage dancers up for elimination.

And he was joined by Team Street’s JJ.

Again, JJ didn’t dance this week because of her injury but it looks like her last week’s performance was not strong enough to save her from the bottom four. So she’s in danger. And so is Megz.

However in Megz’s case, America’s vote came as a surprise. She has also been doing very well in this competition and had actually been told that her duo performance was magnificent when it was announced that she was the second Street dancer to be put up for elimination. So that came as a shock to some. And I don’t blame the audience for booing at those results.

I would have booed at those results too because it just seemed so unfair. As it literally knocked someone down just as they thought they were on cloud nine.

Then for this happened twice in one night – it was like a jinx. Edson had had his best performance of his entire career on this show tonight. Yet all his hard work went right out the window when he was later told that he was up for elimination.

So it didn’t matter that he danced to Drip Drop for his solo and was incredibly acrobatic. For it appears that the audience have longed made up their mind about him and weren’t going to change it anytime soon.

Honestly how many times has he been up for elimination? Because it’s starting to feel like a lot and that he’s down in the numbers every week.

But there was one good thing that came out of Edson’s unfortunate nomination and that was the rest of the contestants then knew they were safe. So for someone like Jim who had doubted himself all throughout practice – finding out tonight’s performance wasn’t going to be a desperate last bid – helped.

Jim is a great performer yet this week it simply fell apart during practice and Travis had a bit of time trying to get Jim to let go.

For there wasn’t a problem with Jim’s technique. And truthfully there’s never been a problem with his technique but the criticism he often receives does stem from over reliance on his footwork. As in the dance still looks beautiful. Though it would have had the audience on their feet if he had actually put some effort into connecting with the song and dance. Instead of going through the motions.

Now Neptune was able to connect and with more than just his all-star partner. He performed an operatic hip-hop routine that was instantly a hit. It had everyone loving him and the performance. And Nigel couldn’t help noticing that the last person Jazmin had danced with and had gotten on the table for just happened to be Twitch.

And we all know what happened with Twitch’s career.

So Neptune received some good feedback. And Jaja who followed him was once again impressing the judges when she showed them that a young woman from the Czech Republic could dance Bollywood.

Apparently Jaja did more than keep up with her partner. She stood out up against an all-star and she kept up with him the whole way. Thus Jaja is another judges’ favorite and it will be interesting to see how far she goes in this competition.

And after Gabby did her duo, Nigel said that she and Jaja were personal favorites of his.

Meaning those two are practically shoe-ins for the final four. But, despite being a pretty good night for performances, there still had to be an elimination. And four people will up.

Edson, JJ, Derek, and Megz were the bottom four. And out of these incredibly amazing contestants, America had decided to save only Megz and Derek.

So goodnight and goodbye to Edson and JJ. Hopefully you won’t give up after this slight set-back. For this can’t possibly be the end of two great dancers.