BY Kristine Francis on August 24, 2015 | Comments: one comment
Related : Reality TV, Recap, So You Think You Can Dance, Television, TV 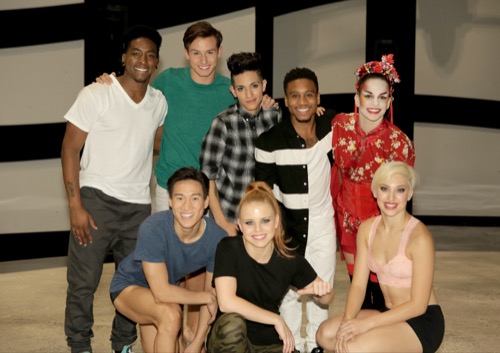 Tonight on FOX, SO YOU THINK YOU CAN DANCE continues with an all new Monday, August 24 season 12 episode 13 called “Top 8 Perform + Elimination”. We’ve got your recap down below. On tonight’s episode the Top 8 dancers perform, but two contestants are eliminated.

On the last episode, the Top 10 fight for their spots on Teams Stage and Street! See who made the cut and who went home as the competition heated up. Did you watch the last episode? If you missed it, we have a full and detailed recap right here for you.

On tonight’s show per the FOX synopsis “each dancer is put to the test as the competition gets more intense! Find out which Stage and Street dancers make the cut for the Top Six.”

And this week’s winner in the Street Vs. Stage Battle is Team Street.

So far Team Street has steadily maintained its hold on the championship but like we’ve seen before – especially when it was Team Stage that was seemingly winning every week – these things can change in a blink of an eye. And thus everything is going to depend on this week’s performances.

Just like before, both teams will be dancing two dances. First they’ll have a duo with an all-star from past seasons and later they’ll have solos in which hopefully they’ll be able to impress the voters. For that’s what it’s all come down to.

The votes keeps them all there and though they may be safe one week – that too can easily change. So first duo of the night was Virgil and Jasmine. And, oddly, they were given a dark/ slightly sinister number.

Yet, as anyone who has been watching the show knows, that’s not really Virgil’s character. Virgil is considered to be light-hearted and comedic. Hence he doesn’t really the typical Liftetime movie villain. But that was the task he was assigned this week and, in my opinion, he was all that bad.

There was a minor issue when he had to pick up his all-star Jasmine. Particualrly as she was a lot taller than him. However, for the most part, he pulled his dance off and the one critique he did receive was that he was a tad humorous as a villain.

And dancing to Stevie Wonder’s “I Never Dream You’d Leave in Summer”, Derek and his all-star Jamie weren’t all that bad either.

They were given a gut retching piece about a relationship tragically ending and Derek was thankfully good at this piece. Some could even say they were seeing some improvement in his work. But unfortunately that didn’t change Derek’s main problem with most of his dances. And, truthfully, there’s only so many times that the judges can tell someone they’re not connecting with the audience or their partner.

So Derek has a long way to go before he finally just gets “it” you know. And this show isn’t supposed to be a learning curve at this point in the competition.

See, although Derek had improved this week, he apparently was still stuck on the technical and was not actually focused on creating an emotional connection. And sure that sounds silly to say out loud but there’s a reason Derek keeps getting put up for elimination – the audience aren’t getting as excited as they normally would be.

So for those at home that can’t pinpoint what it is about Derek that makes you forget him so easily – just know its not you. Derek is simply not coming off as great and thus it wasn’t a surprise when he was once again put up for elimination.

And sadly Hailee will be joining him in the bottom four as the second stage dancer. Though Hailee truly is a whole another story. She’s talented and, honestly, she seemed to be a favorite of the judges so the fact she had fallen out of favor with the voters definitely came as a shock.

Hailee had danced a Hip Hop number with all-star Fik-Shun and the two were great. So much so that I had hoped it would be enough to save her. Yet who knows what will happen. The top eight is thinning out and it looks like America only wants the very best.

Anyways, look what happened to Megz. Megz danced the passo double this week with all-star Paul and this particular dance turned out to be the one that could highlight all her flaws. Her flaws naturally being her lack of technical instruction.

So, for a second, I wondered if she’d get thrown into the bottom next week. But Cat Deely went on to announce that Megz was in danger on tonight’s episode and for the life of me I couldn’t figure out why.

Megz had a great night last week and the judges were loving her. So what about her performance back then wasn’t up to scratch? And wow what a bad night to have a fluke with the technical.

Yet this is a common problem many of the Street dancers are now facing. Neptune and his all-star partner Kayla had a contemporary piece and while I thought it was great – the judges were quick to notice his mistakes. And so they told him that his lack of technical background was showing as well.

Neptune it seems had faltered on the lifts. Meaning it wasn’t as smooth as it should have been and this week his overall performance suffered because of it. So it must have been upsetting for him to later hear he was the final person from Team Street up for elimination.

But that’s just way these things work. Now Jim you see had another off week yet he knew instantly that he was safe. And that it didn’t matter if he was still unable to connect with his partner. Even if it does matter – just not for tonight!

Jim and his all-star partner Comfort had danced a Hip Hop number based off of the mythological medusa and a soldier fighting to destroy her. And the dance required for him to never meet her eye. So that didn’t really hide his problem. It only highlighted it for everyone to see yet he’s not the one up on the chopping block. Which is something I personally believe to be unfair.

Especially as there should be no reason why Jim is considered to be in the same league as Gaby. Gaby was safe this week but we’ve all seen how much she’s done to earn her immunity. And there’s a reason she’s called a front-runner.

Gaby and her all-star partner Robert danced a contemporary piece this week and it ended in a standing ovation. Something she must have gotten used to by now.

And speaking of great performances, Jaja was once again memorable. Though when she was first given her dance – it did take some time for her to figure out what a mobster was. And that was she going to be playing a mobster’s doll.

But Jaja has been meeting expectations since day one and, like I’ve said before, I do think she’ll make it into the finals. And solos this week just further my beliefs.

Last week, the contestants had to dance to solos based on a song from the Empire soundtrack. Yet this time around they were given a little more legroom. And were allowed to choose their own music that would better suit their taste.

And the thing about solos is that reminds everyone why the contestants were chosen. Because although I give Derek and Jim a hard time – there’s nothing more beautiful than when they’re dancing by themselves. It almost seems like it’s the other people that bring down their performances.

However this is a competition and the inability to dance with others is an issue.

So Derek earned his place in the bottom four and I for one was happy it was him that was sent home. But I was also hurt that it was Neptune that was voted to join him.

Derek and Neptune were voted off on tonight’s episode of “SYTYCD” and this competition ended up losing a great dancer when Neptune was voted off so carelessly.