BY Kristine Francis on September 15, 2015 | Comments: one comment
Related : Reality TV, Recap, So You Think You Can Dance, Television, TV 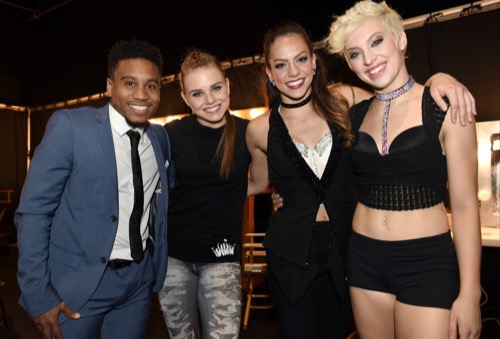 Tonight on FOX, SO YOU THINK YOU CAN DANCE continues with an all new Monday, September 14 season 12 episode 16 called “Finale Part 2: Winner Chosen”. We’ve got your recap down below. On tonight’s episode season 12 concludes with the selection of America’s Favorite Dancer.

On tonight’s show per the FOX synopsis “season 12 comes down to one moment for both Team Stage and Team Street. Find out which team’s dancer has won the hearts of the country and who will take the title of America’s Favorite Dancer.”

Fresh off their recent win at the creative Emmy’s, So You Think You Can Dance was back for its final episode of the season tonight.

Though, before I begin getting into detail, I do have to say that I was right about all my predictions for this season so “Ha” for those who didn’t believe they would come true. Early on it was stated that the top four were bound to be Team Street’s Virgil and Jaja and Team Stage’s Gaby and Hailee.

And this decision wasn’t based off anything silly like who took off their shirt the most. Hence the general dislike of Asaf who has unfortunately returned for the finale. No, the top four were chosen because they were literally the crème of the crop.

They had the personality, they had the actual talent, and luckily no one cracked under pressure. Yet this particular season was always going to be different. The show set up the parameters for an ultimate Team vs Stage dance off. And this year we got to see many Street dancers hold their own against the more classical trained.

Thus the ending result was that I was left pretty confused about who would win. And the judges taking a walk down a memory lane wasn’t really that much of a help.

Usually they could drop a few clues, seeing as the competition was technical over by this point, but nothing. Instead, the judges were asked to pick their favorite dances from this current season and that meant a lot of old faces came back to show us everything that this season had going for it. And in some cases lost out on.

As was the case when Paula decided to press replay on Megz and Edson doing the contemporary dance now known as the shirt dance. You see something like that made some in the audience wondered – again – why did these two go home?

However Paula had two favorite picks and for her second she went with Jaja, someone you can still honestly root for, and last season’s winner Ricky dancing their Broadway number. And that was good to watch again because it showed out versatile Jaja could be.

And the same didn’t necessarily go for Jason’s pick but he did at least pick someone relevant. He chose Virgil and Joshua’s dance. You know that Hip Hop number they performed not that long ago that highlighted Virgil’s already incredible skills at the dance. Well apparently that number was stuck in Jason’s head and it turns out he really did love it.

But not everyone chose their favorites based off the dance. When Hailee got her chance to pick, she went with the dance that she knew required kissing. And not just kissing anybody – she wanted to kiss Robert again.

So the first half of the finale was, to tell the truth, spent goofing around. And that explains why they seriously devoted a portion of tonight’s episode to checking out the contestants.

It seems that was their thing this year – they had completely hot contestants. Or so says them. Anyways, in a typical fashion of killing time as best as they can, the show introduced a slew of guest stars that most of us have never heard about.

There was a kid dancer who was pretty damn good at Hip Hop. And executor producer Nigel may have hinted afterwards that he’s been throwing around the idea of possible doing a kids’ version of “So You Think You Can Dance” one day.

If that happens – good – but don’t play with my emotions, Nigel.

And, in addition to maybe spin-off, there was also nice moment between Twitch and Travis when they both chose as a favorite a dance belonging to the other team. Something like that goes to show that truly do respect each at the end of the day and that this “vs” thing is only for the show.

But, by the end of the first hour, I was ready to hurt someone. So dear tv shows across the world, don’t drag out eliminations. We know the first hour and a half is junk. And you’re not fooling anyone.

Then, just as the show was truly trying my patience, eliminations came around. Yet they decided to break up the eliminations into three parts rather than do it all at once. So first of this three segment draw-out was the part where they declared the champion for Team Stage.

And though Hailee and Gaby were both front-runners, sadly only one of them could go up against Team Street’s champion.

Thus Gaby, called it again, was the last Team Stage dancer left standing. And Hailee ended up being the first person eliminated from tonight’s episode.

However, I for one, didn’t like this new of eliminating people. In the end it shouldn’t have all come back to teams. Because what if the season 12 final two could have been two Street or two Stage members and people would have voted that way if that option hadn’t been removed from table?

Gaby is good but, seeing as the votes were broken down the way they were, she didn’t have to go up against both Jaja and Virgil. And that could have added a little something towards the finale.

Not to sound dirty but two on one would have naturally been more of a challenge. Yet that’s not what happened here and the champion of Team Street proved to be Jaja.

Jaja is a favorite krumper. She started out as someone who had already looked been over once on a past season and this season turned out to be different for her. If anything it was her second chance at making a name for herself. Although before you go – well, she deserves to win after enduring so much – Gaby also had a second chance.

If you recall, Gaby first audition this season was disastrous. She’s tapper but, by the way she kept sliding across the floor, no one initially thought she was any good. Yet she tried out for a second time, even traveling to a different city to do so, and she did get a ticket to Vegas.

So both ladies worked really hard to get where they are and with a couple of words like “America’s favorite dancer is” Cat Deely announced Gaby as the winner.

That’s right, Gaby is the winner of Season 12!

But what was probably the most exciting thing about this episode was the short dance in which we got to see Jenna Dewan-Tatum hit the dance floor one more time.

Jenna will always be worth it.