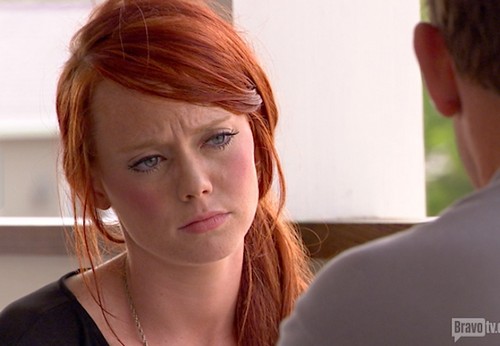 Kathryn Dennis – one of the stars of the Bravo reality show “Southern Charm” – has been hinting on social media for a quite a while that she is pregnant again. She has finally confirmed that she is expecting a second child with former Senatorial candidate Thomas Ravenel – they will welcome a son in December.

Thomas and Kathryn have had a tumultuous relationship – back in August Kathryn posted a cryptic tweet that could have been interpreted that things were finally over once and for all for the first couple of “Southern Charm.” Apparently it wasn’t completely over. In an interview with People Magazine Kathryn says she and Thomas spent a romantic weekend together – and Kathryn Dennis was surprised to find out she was pregnant. “Things were wishy-washy, but we embraced it,” the red-headed 24-year-old Charleston native remarked about the weekend she spent with Thomas.

The reality star also spoke with the Daily Dish – and is happy to report that she is more relaxed during this pregnancy than she was during her first. 18-month-old Kensie doesn’t quite understand that she’s going to be a big sister. Kathryn hopes that by the time her baby brother arrives she’ll understand a little bit more and have fun with him.

As for Thomas Ravenel – Kathryn states that he is still “soaking in the news and trying to make his changes.” Thomas – whom Kathryn says travels a lot for polo – issued his own statement regarding being a father for the second time, “The greatest gift thus far in my life has been privilege of being a father to my daughter Kensie. Now, with a son on the way, I feel doubly blessed. My cup runneth over.”

But don’t expect Thomas Ravenel to put a ring on the mother children’s finger anytime soon. According to Kathryn are not romantically involved – they are friends. “We communicate and things are pleasant. That’s really all I can hope for,” Kathryn revealed. Fans probably won’t get the chance to follow Kathryn through her second pregnancy. In August there were rumors that Bravo had declined to renew “Southern Charm” for a third season.