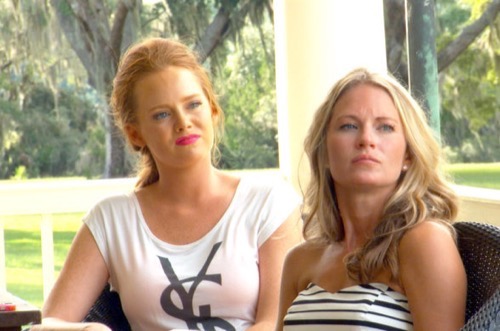 Tonight on Bravo Southern Charm returns with a new Monday April 13, season 2 Episode 5 called, “Shep-istotle,” and we have your weekly recap below. On tonight’s episode after another fundraiser goes awry, Thomas Ravenel realizes it’s time for Kathryn Calhoun Dennis to get a hobby, so she won’t further exacerbate his campaign stress and he agrees to move her downtown into a house she can decorate.

On the last episode, after Thomas told Kathryn about his “Raise the Roof” campaign ad, she ditched him to spend the night with a friend before turning her ire toward the real culprit, Whitney. Meanwhile, Landon helped Cooper prep for his upcoming fashion show and Craig decided not to study for the bar in order to focus on his newly found passion for modeling. Cameran enlists Shep’s help in her quest to get Craig back on the path to ambition and Whitney came under attack when he came face to face with Kathryn at Thomas’ fundraiser. Did you watch the last episode? If you missed it, we have a full and detailed recap right here for you.

On tonight’s show as per the Bravo synopsis, “after another fundraiser goes awry, Thomas realizes it’s time for Kathryn to get a hobby, so she won’t further exacerbate his campaign stress and he agrees to move her downtown into a house she can decorate. Meanwhile, on the eve of Cooper and Landon’s fashion show, Shep decides to stage an intervention with Craig before he becomes a lost cause. And Whitney vows to avoid Kathryn at all costs at the fashion show.”

Tonight’s episode is going to be another drama packed one, which you won’t want to miss. So be sure to tune in for our live coverage of Bravos’ Southern Charm Season 2 episode 5— tonight at 10PM EST! While you wait for our recap, hit the comments and let us know how excited you are about the new episode of Southern Charm tonight.

Thomas’s fundraiser was a disaster and yet the morning after wasn’t any better. See Whitney and Kathryn had had an argument at the event and because of that Thomas now feels justified in not allowing his girlfriend to join his campaign. However if at any point Whitney felt like he won anything on the night he basically talked down to Kathryn out of spite – he found out the next morning that Thomas was already looking into finding a new consultant. So thankfully there is one good thing that came out of that fundraiser and that’s Thomas realizing for himself that he actually needed to get serious about his senatorial run.

If Thomas really wanted to win then there were several things he was going to have to change. And his new consultant has already pointed out that he came off as an elitist.

Voters see Thomas playing around on the polo field and he was frequently seen outside clubs prior to the birth of his daughter. So Thomas was warned about that and it was suggested he hold a meet and greet with the public. It was going to be a traditional southern barbecue and it was going to be open to everyone. Meaning strangers could have walked right through his home.

And if they did they must have seen evidence of both Kathryn and Kensington. Yet, and surely others must have noticed as well, it was odd when Thomas was handing out his thank-yous to the people that have supported him thus far – he deliberately left out Kathryn’s name. And you know what that ended up being a sticking point for her.

No woman likes being ignored by the man she’s hoping to one day marry.

Kathryn was tired of being pushed off stage and feeling like a glorified nanny. She wanted to take part. Do the whole stand by her man thing. So what she really wanted to do was help Thomas with his campaign. But instead of telling her the real reason why he didn’t want her to interfere – he was worried about how the conservatives were going to view their unmarried status – he just pushed her away. Then he got angry at her for not understanding what he needs and supporting his decisions.

So their relationship doesn’t seem like it’s going anywhere. And speaking of things that’s stuck in neutral – Craig needs to take the bar exam. He’s been holding off on doing so because he swore he didn’t need yet. But he fails to understand how incredible broke he is. So Shep finally decided to talk him.

And the conversation did not go well.

Shep, being a good friend, tried to warn Craig about the pitfalls on partying hard and never thinking about tomorrow. However, coming from a known partyboy, the advice didn’t amount to much. And Craig felt angry afterwards. Like Shep had been judging him.

So Craig chose to ignore everything Shep had been trying to teach him and instead he found a way to keep fooling around. His next endeavor, besides women and booze, was a short stint in the modeling world. Landon was helping out at a fashion event and they needed more male models. Hence Craig stepped in.

But modeling, while nice, is not really a career for someone so late in the game. According to Whitney, Craig will be the last person in his graduating class to take the bar and there’s no guarantee he’ll pass. So with modeling ruled out, possibly being lawyer ruled out, what’s left for Craig?

At the runway show, Craig had fun and his friends enjoyed themselves laughing at his expense. And for once Whitney and Kathryn did trade barbs thereby making it uncomfortable for everyone else. So the event was a success to say the least.

Though the after party left a lot to be desired.

Drunk Shep and Drunk Thomas were back at hounding Craig and those two came close to pushing him too far. It’s one thing to be concerned and just downright annoying when supposedly “caring” people become a nuisance!