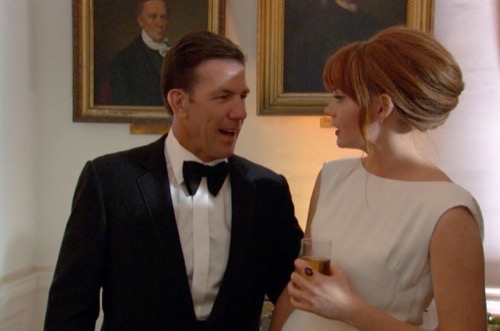 Tonight on Bravo Southern Charm returns with a new Monday April 27, season 2 Episode 7 called, “Better Late Than Never,” and we have your weekly recap below. On tonight’s episode, Patricia hosts an all-male dinner party to avoid the drama that women can bring and Whitney and Thomas end up fighting like a couple of girls. Meanwhile, Craig is homesick for the Delaware and invites Shep and Whitney to his parents’ house for the weekend, but not before Craig gets some potentially devastating news.

On the last episode, as Shep planned his 35th birthday party, Cameran decided it might be time to get a dog so she could put off having a baby for just a little longer. Meanwhile, Thomas and Kathryn moved downtown just as the campaign started heating up. Despite hoping this would improve their relationship Kathryn started to realize Thomas’ campaign manager had other ideas. And when the gang finally got together to celebrate at Shep’s party things got old school. Did you watch the last episode? If you missed it, we have a full and detailed recap right here for you.

On tonight’s show as per the Bravo synopsis, “Patricia hosts an all-male dinner party to avoid the drama that women can bring and Whitney and Thomas end up fighting like a couple of girls. Meanwhile, Craig is homesick for the Delaware and invites Shep and Whitney to his parents’ house for the weekend, but not before Craig gets some potentially devastating news. When the gang gets dressed in their finest formal attire to attend Cooper’s first annual Founders’ Ball, Kathryn ends up home alone waiting for her Prince Charming, a.k.a.Thomas, to arrive”

Tonight’s episode is going to be another drama packed one, which you won’t want to miss. So be sure to tune in for our live coverage of Bravos’ Southern Charm season 2 episode 7— tonight at 10PM EST! While you wait for our recap, hit the comments and let us know how excited you are about the new episode of Southern Charm tonight.

On tonight’s brand new episode of “Southern Charm”, the morning after has brought certain things to light. And odds are Kathryn and Thomas’s relationship won’t survive because of it.

Either Kathryn has come to some conclusions on her own or she’s just now seeing that signs in regard to her relationship with Thomas but, apparently, it recently dawned on her that Thomas is never going to put her first. In the beginning, it was fine that he still needed time to decide to if they have a future. They had a baby and then had to think about where they wanted to go. However things have changed since then.

They’ve been raising their daughter Kensington together, cohabitating, and Thomas has gone as far to ask her for emotionally support during this trying time of his. Yet what is Kathryn getting in return for this? How are her needs being met? She’s 24 after all and most nights she’s at home with a baby while he’s out consulting his friends about what to do with his campaign.

The same campaign that has him publically distancing himself from Kathryn because it doesn’t look good for him to be around his unmarried baby mother.

So, after being kept isolated, Kathryn now wants more. And she realized it when she went out on Shep’s birthday and ended up having more fun with her friends than she’s had in a long time.

Thomas merely wants her around when he wants/ need something. But Kathryn actually wants a relationship. One where she gets to see Thomas regularly and where she also feels needed outside of the house. And in the meantime Kathryn may want to see what her life is like without Thomas.

Though not everyone is as sympathetic to what’s going on with Kathryn as Landon is.

Landon, herself, was a young wife and now she’s divorced. So she knows how hard it is to maintain a relationship with someone you didn’t feel is fully involved. Cameran on the other hand is a tad more traditional. As in she didn’t think Kathryn should have been out partying late into the night when the woman has a small baby at home.

That’s just not how things are done.

But, despite each wanting to improve on what they have, Kathryn and Thomas’s relationship only got worse Cooper’s Ball.

Cooper, you see, is an expat. He’s from Alabama originally and so he never got to experience the grand traditional South Carolina Ball. Hence, he eventually wanted to throw one and invite all of South Carolina’s elite.

Now when Kathryn heard about the ball, she knew she wanted to attend because she herself didn’t grow up in that world either but for Thomas, he saw the event as an opportunity to win over some support for his upcoming election. And, seeing as he doesn’t believe he can schmooze with Kathryn at his side; he ditched her and attend the event alone. Then, only after he was done “working the room”, did he finally return to fetch his girlfriend from their home and properly escort her to the ball.

So that right there was a turning point. That’s when Kathryn began to doubt her relationship with Thomas will ever work. Everyone might want them to work yet Thomas doesn’t seem to be putting in any effort. Nor does he take Kathryn seriously.

Case in point, Kathryn was the first to say the first commercial was a waste of money. But Thomas only realized that after someone else pointed it out to him. And, hey, he’s back on good terms with Whitney after Whitney both wasted a huge chunk of cash and insulted his girlfriend in the process.

As for Craig, his hard partying lifestyle has come back to bite him. His boss has finally gotten wind of what he’s been doing and as it turns out the party does ultimately come to end when Craig no longer has a job to pay for the drinks.