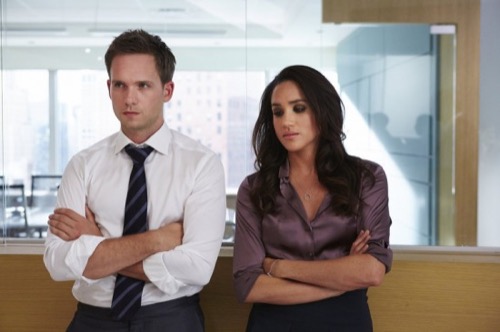 Suits returns to the USA network tonight with an all new Wednesday, January 28 season 4 mid season premiere called, “Enough is Enough,” and we have your weekly recap below. On this evening’s episode, Gabriel Macht directs the Season 4 mid-season premiere, which finds Louis [Rick Hoffman] gaining leverage in his quest to become a name partner of the firm; and the Pearson Specter team dealing with the fallout of Louis learning Mike’s [Patrick J. Adams] secret.

On the last episode Harvey and Jessica took measures to protect the firm; Louis tried to get his affairs in order. Did you watch the last episode? If you missed it we have a full and detailed recap right here for you.

On tonight’s episode as per the USA network synopsis, “it’s a new world order as Jessica (Gina Torres) tries to appease Louis (Rick Hoffman), in the wake of his discovery of Mike’s (Patrick J. Adams) secret. The furious Louis buries Mike in a mountain of menial grunt work in the hopes that he will quit – although Mike isn’t the only one who feels Louis’s wrath. And Robert Zane (guest star Wendell Pierce) calls in a professional favor with Harvey (Gabriel Macht)… one that comes with personal consequences.”

Tonight’s episode looks like it is going to be great and you won’t want to miss it, so be sure to tune in for our live coverage of USA Network’s “Suits” at 9:00 PM EST!

While you wait for our recap hit the comments and let us know how excited you are for another episode of Suits tonight.

Tonight’s episode of Suits begins with Harvey rushing back to the office, he demands to know why Jessica called him back to work in the middle of the night. Louis Litt is sitting in her office and Jessica reveals that “Louis knows.” Louis gloats that he is becoming partner at the office, and Harvey tries to argue. Louis tells Jessica he wants to see his name up on the wall tomorrow and storms out. Harvey asks Jessica what she was thinking offering Louis partner – and she says that “she just ate a big bowl of shit because he brought Mike in to her house.”

Harvey stops by his office and Donna is crying – she apologizes for spilling the beans to Louis. Harvey comforts her and tells her that it wasn’t her fault, Louis already knew and she just confirmed it. Donna wants to call Mike and tell hi what happened, but Harvey says to wait until the morning.

Meanwhile, Louis shows up at Mike’s apartment. He announces that Jessica just made him partner, and it is all because of him. He gloats that Donna, Harvey, and Jessica all confirmed that he was a fraud. Mike demands to know what Louis wants from him. Louis warns Mike that if he doesn’t quit the firm, he will “bury him under a mountain of shit.” Rachel arrives in the middle of their argument and realizes that louis knows the truth. Louis leaves and Mike explains that Louis doesn’t just know – he was just named partner.

The next morning Mike heads to Harvey’s office, furious, he demands to know why they named Louis partner. Harvey tells Mike that “it is done” and there is nothing they can do about it. Harvey gives Mike an inspirational speech about not letting Louis break him. Mike leaves and runs in to Louis in the hallway, Louis just finished scraping his name off the plaque on the wall. Louis says that from now on Mike isn’t doing anymore cases since he doesn’t have a degree – he will be doing paralegal work. Donna is waiting for Louis in his office and tries to talk to him, he doesn’t want anything to do with her after she lied to him and says that she is “dead to her.”

Mike calls Rachel for help and he has cases of paralegal work to do and there is no way he is going to make the deadline that Louis set. Rachel agrees to help him, but she says that doing the work isn’t the answer – he needs to make Louis fall in love with him over again. Meanwhile, Louis meets up with Katrina at the park and says that he is a partner again and he wants to hire her back as his associate. Katrina agrees, but is confused about why they made him partner – she warns him that Jessica is probably “playing him for a fool.”

Harvey visits Jessica and tells her that they have a problem – Louis told Lane about being made partner and that Mike was a fraud. He warns her that Louis is getting worse, and he is not going to take it. Jessica tells him that he is going to take it – and do it with a smile on his face. She announces she is going to clean up the mess herself and storms out of her office. She visits Louis and reprimands him for telling Zane. Louis tells her to call a meeting with the senior partners and tell them that Louis is back in or else he is going to tell more people.

Jessica caves and calls the meeting, and they make Louis partner. Afterwards, Jessica yells at Harvey that he needs to “make nice” with Louis and pretend that he likes him. Jeff storms in to Jessica’s office and demands to know what happened. He can tell that Louis has dirt on him, she whines that she can’t tell him the truth yet. He agrees to take that as an explanation for now – but not forever.

Rachel finds Louis sitting at her desk – he wants her to congratulate him on making partner. Rachel reminds him that he threatened to throw the man that she loves in jail. Louis tells her that he knows that she helped Mike do his paralegal work, Louis says that Rachel is a fraud and Mike may not have gone to law school but he is a better lawyer than she will ever be. He says that paralegal work is all she is good for and leaves her speechless.

Harvey heads back to his office and Zane is waiting for him and having coffee with Donna. He is ready to cash in on his favor, he wants Harvey to get a firm to “back off.” Donna reveals that Zane is talking about Scottie and reminds him that he has leverage on her. Mike finds Rachel crying in the file room, and demands to know what Louis said to her. He storms off to Louis’s office and screams at him to leave Rachel alone. Louis reveals that he isn’t mad that Rachel helped him do the paralegal work, he is mad that she lied to his face about Mike being a fraud. Louis says that from now on he is a different person and he is going to keep hammering on Rachel until Mike breaks.

Harvey meets up with Scottie and tells her he needs a favor – he needs her to settle her case with Robert Zane. Scottie says that she just joined a new firm and she can’t risk losing, Harvey explains that Zane is going to figure out their secret about Mike and expose them. She screams that she loved him and he is being a “selfish son of a bitch.”

At the office, Louis’s name is put up on the wall as partner. He still isn’t satisfied, he says that he wants an unveiling and a party tomorrow, it will be at 4:00 PM sharp. Jessica says she has a meeting at 4:00 tomorrow, she tells Louis that it was a “stone cold move” and was just like something Harvey would have done. She gets in the elevator to leave, and orders Jessica to come to the party tomorrow and bring Harvey with her.

The next day Jessica, Harvey, and Mike stop by Louis’s office and reveal that he is done making demands. Jessica reveals to him that since he is a partner, now he is a co-conspirator and if he goes to the police about Mike, he will go to jail with them. Louis has no choice but to sign the contract, even though it completely strips him of the power he has been holding over them. They all head to Louis’s induction ceremony and Jessica gives a speech and orders everyone to “wipe the slate clean,” and put their differences aside.