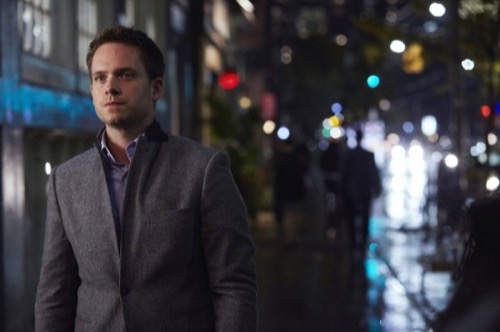 Suits returns to the USA network tonight with an all new Wednesday, February 11 season 4 episode 13 called, “Fork in the Road.” On this evening’s episode, Harvey [Gabriel Macht] and Louis [Rick Hoffman] travel to see a client to whom they have deep ties; and Harvey takes advantage of the time to force Louis and Mike [Patrick J. Adams] to confront their trust issues.

On the last episode Harvard ethics professor Henry Gerard sought Harvey’s help with a case that required a lack of ethics to win. Mike, meanwhile, did his best to not be spotted by the professor, whose class he never took; and Louis tried to wine and dine a socialite CEO. Did you watch the last episode? If you missed it we have a full and detailed recap right here for you.

On tonight’s episode as per the USA network synopsis, “Harvey and Louis travel to see a client to whom they have deep ties; and Harvey takes advantage of the time to force Louis and Mike to confront their trust issues. In other events, in a flashback, the root of Harvey and Louis’s competitive relationship is explained; and Mike learns the limits of his intelligence when it comes to the law.”

Tonight’s episode of Suits kicks off with Donna and Rachel out for drinks together on a girls’ night – Rachel explains that she found out Donna snitched to Louis about her getting Katrina a job. Rachel reassures her that she isn’t mad, but Donna apologizes anyways. Rachel dishes that Louis came to her and tried to make amends, but she told Louis that they couldn’t be friends again until he forgave Mike.

Meanwhile, Jessica and Harvey are having drinks at his house. Jessica wants Harvey to “make things right” with Louis. Harvey says that he is willing to make peace, but that is never going to happen until Louis forgives Mike. Jessica tells him that he needs to find a way.

At the office the next day – Donna reveals that she signed a major client for Harvey – Jordan. He wants to celebrate with drinks, but Donna tells him that he is busy and she made a date with him to have drinks with Louis. Harvey gripes, but she promises him that she will call and run interference if she needs to.

Flashback: Mike is delivering packages at Jim O’Donnell’s office. He flirts with a secretary named Claire, and she agrees to get drinks with him.

Harvey visits him at his apartment later that night and tells him that they are “taking a trip down memory lane” and gives him a piece of paper and tells him to meet him at Kiernan Motors tomorrow. Harvey heads out to get drinks and celebrate Fairchild’s retirement. Harvey tells him that they are wasting their time – and Hardman is not going to name either one of them senior partners. Louis says that he has a plan, and Hardman may not make either one of them a senior partner, but he might make both of them junior partners. Harvey beams that this is the best idea Louis has ever had.

Flashback: Mike’s friend Trevor surprises Mike with a new apartment. He tells him that he is going to cover all of the rent for a year, since Mike took the fall for him and couldn’t graduate from college because of him. Trevor wants to celebrate – but Mike says that he can’t he has a date with Claire.

The next morning Harvey and Louis pay Hardman a visit. He isn’t buying their “two junior partners” plan. Fairchild says that he wasn’t going to name a new partner at all, but he admires their gumption. So, he tells them that whichever one of them lands Kiernan Motors, can be named senior partner. Harvey and Louis head to a car rental place to get a car to impress the reps at Kiernan – Louis is shocked when Mike walks in and Harvey announces that they are taking him with them on the road trip.

Mike, Louis, and Harvey hit the road together all in one car. Louis doesn’t want to talk – but Mike demands to know why Louis has forgiven everyone but him. They bicker over which one of them hates being in the car more. Meanwhile, back at the office Jessica and Hardman are bickering over who will land Kiernan – Harvey or Louis. Hardman informs her it isn’t about who lands Kiernan – it’s about which one of them will do “whatever it takes for the firm.”

Flashback: Mike heads out on his date with Claire. They have appetizers and beers and get to know each other. Claire wants to know what he does besides being a bike messenger. Claire informs him that she wants to be in a relationship with someone that takes his career seriously, so he lies to her and tells her that he goes to Columbia law school. The next day Mike heads to Claire’s office and she is working on a client’s case, Suarez is about to be deported to the Dominican Republic because his visa has expired. Mike agrees to help Claire with the case.

Harvey heads in to meet with Kiernan, he is determined to win over the client. Kiernan says that he has a hearing tomorrow against Fletcher Engines, and if Harvey can win that then he will sign with him. Harvey, Louis, and Mike head home, and bicker the whole way about who has to sit by who. Harvey heads in to Hardman’s office and brags to him that he “killed his meeting” with Kiernan. Hardman informs him that he has to drop Kiernan now, because Fletcher Motors called him and they want to sign now. Harvey is furious, he just gave Kiernan his word he would represent him, and he can’t drop him now. This was clearly all Hardman’s plan from the beginning, he knew that if Harvey met with Kiernan, Fletcher would want to sign.

Harvey goes to court and returns to the office, and reveals to Donna that he lost his case against Fletcher. He thinks Hardman tipped them off, because they knew his every move before he made it. Now, he needs to sift through hours of paperwork of patent laws. Donna reminds Harvey that patent laws are Louis’s forte, and he should ask him for help in cleaning up the Fletcher and Kiernan mess. Harvey visits Louis and asks for his help – he promises him that if he helps him and Harvey makes senior partner, he will make sure he is named senior partner as well.

Flashback: Mike and Claire present the case on Hector Suarez, Claire’s boss kicks Claire out of the office and then tells Mike that he knows he is a fraud and he isn’t going to law school – he throws all of the work that Mike did in the trash can and then warns Mike to stay away from Claire.

Harvey heads in to Hardman’s office – and Hardman announces that he has made Louis senior partner because Louis was “willing to do whatever it takes.” Harvey is baffled because he landed Kiernan and thought that was what he needed to do…but apparently that wasn’t the case. Harvey storms in to Louis’s office, Louis confesses that he is the one that warned Fletcher and gave them information on Harvey’s case. Louis explains that Hardman told him he could be partner if he did it, but he can help Harvey get a spot just like Harvey wasn’t going to help him. Harvey screams that he doesn’t want shit from him and calls him a “rat.”

Flashback: Mike tries to talk to Claire but she freaks out on him and calls him a sociopath for lying. Claire tells Mike that the only thing that she hates more than a guy who doesn’t have his life together – is a guy that lies about having his life together – and then she storms off.

Harvey, Mike, and Louis are on the road again. They stop at a gas station and Harvey heads inside to pay. Louis and Mike begin fighting, and Louis jumps on top of him and begins choking him. He screams at Mike that he “ruined his life and his firm.” Harvey comes outside and breaks up the fight, and then Louis begins sobbing.Mike and Louis finally talk – Mike apologizes for lying to him but insists that he is not a con man. Going to law school is the only thing that he ever lied to Louis about. They discuss what Louis said about Mike lying about being an orphan. Louis admits that he looked it up – and he knows Mike’s parents really did die in a car crash, they make amends.

Flashback: Mike is depressed that Claire dumped him. Trevor reassures him that there are “plenty more fish in the sea.” Mike doesn’t want to hear it, he doesn’t think that he will ever meet another girl like Claire.

At the office Jessica finds Donna pacing in her office and demands to know what is wrong. Donna informs Jessica that she thinks that she is making a mistake by not standing up for Hardman, Jessica explains that Hardman tested Harvey and he chose his best interest over the firm’s best interest. Jessica assures Donna that “some day Harvey’s day will come.”

Flashback: Mike visits his Grammy and tells her that he is moving in to Trevor’s apartment with him, even though she forbid him from doing so. His Grammy says she will support his decision, but she doesn’t like it.

Harvey, Mike, and Louis finally arrive at Kiernan. Harvey reveals that he is giving 50% of Kiernan to Louis and 50% of Kiernan to Mike, so they will have to work together. He leaves them at the office and says he will find his own ride back, Louis and Mike head inside together, and Harvey has successfully done what Jessica told him to do, he made things right with himself, Mike, and Louis.