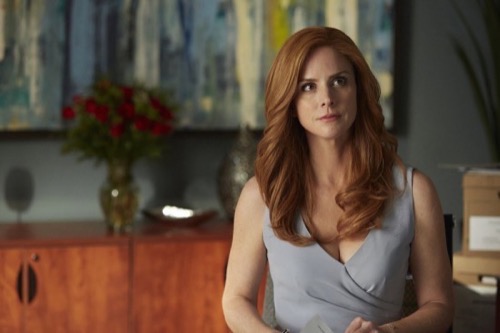 SUITS returns to the USA network tonight with an all new Wednesday June 24, season 5 premiere called, “Denial,” and we have your weekly recap and spoilers below. On this evening’s episode, in the season 5 premiere, Harvey’s (Gabriel Macht) work is impacted by changes around the office; and Donna (Sarah Rafferty) adjusts to working for Louis, who believes she’s certain to return to Harvey. In other events, and Mike (Patrick J. Adams) and Rachel (Meghan Markle) must decide how and when to share their big news.

On the last episode Harvey and Jessica take measures to protect the firm; Louis tries to get his affairs in order. Did you watch the last episode? If you missed it we have a full and detailed recap, right here for you.

On tonight’s episode per say the USA synopsis “in the Season Five opener, Harvey (Gabriel Macht) has difficulty adjusting to changes around the office, which affects his ability to do his work. Donna (Sarah Rafferty) must acclimate to working for Louis (Rick Hoffman), who’s certain it’s only a matter of time before she returns to Harvey. Mike (Patrick J. Adams) and Rachel (Meghan Markle) must decide how and when to share their big news, but their excitement about their future together will take a back seat to Harvey and Mike’s latest case. And an up-and-coming partner, Jack, makes his presence known to Jessica (Gina Torres), confronting her about whether Harvey’s way of doing business is beneficial to the firm.”

Donna finally left Harvey after ten+ years of service at the firm and now that their working relationship, along with their friendship, is officially over, well, it appears that Donna meant more to Harvey than he initially thought.

On tonight’s all new episode of “Suits,” Harvey has had to rewind back to six weeks ago when Donna first quite. Harvey is currently in therapy. And his doctor wants to discuss what led him to her couch.

So, in a series of flashbacks, we see how everything unfolded between Donna and Harvey. And it was actual Harvey that closed the door on something that could have been good for him.

Earlier, after Harvey had told her he loved her, Donna knew they couldn’t just go on as if nothing had happened. And if Harvey wasn’t up to changing things on his end, then Donna felt like she had to be one to make the next move. Therefore, she handed in her resignation.

And to be fair, Donna was going to work out her two weeks’ notice but Harvey told her to go. Just go. Apparently, he didn’t want to bother with the two weeks if she still felt like she was going to be leaving by the end of it.

Donna took Harvey at his word and she immediately went to go work for Louis. Over the years, Louis has approached countless times about possibly working for him yet the answer had always been no. Donna had been Harvey’s Girl Friday and for a while it looked like she was never going to leave him.

But, unfortunately, a line was crossed. And, afterwards, it was up to Mike and Rachel to pick up the pieces.

Rachel decided to take a few days off of school in order to fill in for Donna with Harvey. Mike didn’t want her to make such a sacrifice, but Rachel felt like they should cut him some slack. So, for his part, Mike tried to keep Harvey in a good mood.

After his engagement announcement failed to warrant a response, Mike then tried to help Harvey in saving a client of theirs.

It seems their client was soon going to be forced to declare bankruptcy, so Harvey made it his personal mission to not only save their client’s business but also make it profitable once again. And, in order to do that, Harvey needed everyone to be on point, including his team of two – Mike and Rachel. But for some reason Rachel later dropped the ball.

She forget to add one creditor to a very crucial list they needed to fight the bankruptcy. So Harvey’s plan, which relied on undermining the creditors’ position, could all backfire. Rachel didn’t just make a mistake. She nearly lost the firm 12 million dollars in revenue.

Now, while that’s not like her in the least, it technically wasn’t Rachel’s job to do secretarial work. So Mike wanted to cut her some leeway. And when Harvey looked like he was going to fight him on that – Mike finally brought up the real reason why there was a problem with the paperwork.

Mike asked Harvey right out about why he hasn’t hired a new assistant yet.

Harvey is under the impression that Donna will eventually come, but Mike and Rachel know better. They’ve seen for themselves how serious Donna is and, as his friends, they know that Harvey should give up hope.

So with the help of his doctor, Harvey gave himself a firm kick and he got back to work. He resolved that issue with his client and he did what he was supposed to do when Mike said he was engaged. He took his friend to the Nets game.

Front row tickets and they’ll most likely be sitting next to Jay-Z and Beyoncé.

Meanwhile, Donna was slowly working on gaining Louis’s trust. He was apprehensive about taking her on with everything that’s happened with Mike. But Donna promise she wouldn’t leave him and she was there to constantly reassure him.