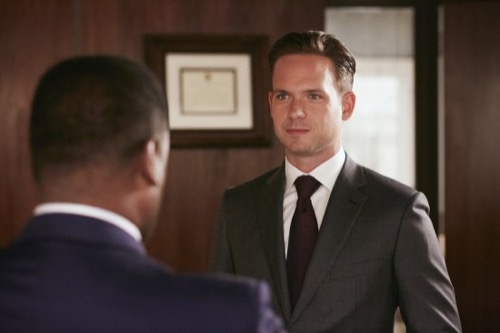 SUITS returns to the USA network tonight with an all new Wednesday July 1, season 5 episode 2 called, “Compensation,” and we have your weekly recap below. On this evening’s episode, Harvey [Gabriel Macht] searches for a replacement for Donna; [Sarah Rafferty] Mike [Patrick J. Adams] takes on a case as a favor; Rachel’s father offers advice about Rachel’s engagement to Mike; Louis [Rick Hoffman]  is embroiled in surprising money matters; and Jack confronts Jessica [Gina Torres] about Harvey.

On the last episode in the Season Five opener, Harvey (Gabriel Macht) had difficulty adjusting to changes around the office, which affected his ability to do his work. Donna (Sarah Rafferty) had to acclimate to working for Louis (Rick Hoffman), who’s certain it’s only a matter of time before she returned  to Harvey. Mike (Patrick J. Adams) and Rachel (Meghan Markle) had to decide how and when to share their big news, but their excitement about their future together took a back seat to Harvey and Mike’s latest case. And an up-and-coming partner, Jack, made his presence known to Jessica (Gina Torres), confronting her about whether Harvey’s way of doing business was beneficial to the firm. Did you watch the last episode? If you missed it we have a full and detailed recap, right here for you.

On tonight’s episode per the USA synopsis “Harvey (Gabriel Macht) searches for a replacement for Donna (Sarah Rafferty). Mike (Patrick J. Adams) takes a case as a favor, which he must justify to Jessica (Gina Torres) – while Rachel’s (Meghan Markle) father, Robert Zane (guest star Wendell Pierce), offers some unsolicited advice about Rachel’s engagement to Mike. And Louis (Rick Hoffman) is embroiled in surprising money matters, while an up-and-coming partner, Jack (guest star John Pyper Ferguson), makes his presence known to Jessica, confronting her about whether Harvey’s way of doing business is beneficial to the firm.”

Harvey is currently going through a crisis. Donna left him and he’s still struggling to come to terms with that. But while he’s learning how to move on with his life, courtesy of his newest therapist, a senior partner at the firm has come to see Harvey’s loss as their gain.

Jack Soloff has been saying things around the office. Initially, he dripped poison into Jessica’s ear about how reckless Harvey could be. Yet, when he failed to turn his boss against her golden boy, he then decided to weaken Harvey’s stance at the firm using his newest position.

Unfortunately, Jack has recently been named as the new head of the Compensation Committee at the firm. And with his first ordinance on the job, he wants to find a way to cut into Harvey’s paycheck. A paycheck, mind you, that is well rewarded.

Harvey has brought millions to the firm. So the fact that he just happened to be making more based on compensation shouldn’t actually be a factor. And Louis, another named partner, sided with Harvey on this matter.

Jack had tried to enlist his help, but, at the final moment, Louis chose to double-cross him and side with Harvey. It seems he wanted to give Harvey this as a way to make amends for the whole Donna thing. But sadly, this like many things, ended up blowing up in Louis’s face.

Harvey didn’t want help and, for him, it was insulting for Louis to even believe he needed it.

Both men got into what Jessica called a pissing contest and Harvey told Louis that he’s the one that’s still paying Donna’s paycheck. Technically, Harvey brought Donna to come work with him and so he was the one that had to pay her back when he was still an associate. Later, he got promotion, then so did she.

And now Donna is the highest paid secretary at the firm. Yet her new boss doesn’t know how to keep her paying her at her own rate much less the 2 percent increase she was guaranteed to come work for him.

Louis did something silly. After he got into that fight with Harvey and heard about Donna, he then decided to side with Jack and cut off some of Harvey’s case flow. And if he succeeds then not only will his own paycheck be fatter come payroll but he surprisingly he’ll have enough money to pay Donna.

However, Jack had already tried bringing it up in a meeting and that plan failed. Mainly because of Louis’s input earlier. So if Louis wanted the job done right then he had to come up with his own plan of convincing the board.

And he did come up with a plan.

Louis was going to go back to the partners and get them to sign off on cutting Harvey’s paycheck but first he had to gain allies. And the only way he could do that was to show them how much Harvey was actually making at the firm. Though such a thing is very risky and could have potentially gotten him fired.

But Louis came up with a safeguard against that. He found a way to reveal Harvey’s paycheck without getting his hands dirty.

Later, Donna attempted to intervene. Yet Louis shut her down. He said he had everything under control and that she knew who he was when she came to work for him.

And, well, Louis made a mistake. Because he went ahead with his plan on revealing Harvey’s paycheck and right afterwards Harvey apologized to him. Harvey it seems had received a wakeup call and he realized how unfair he’s been. So he went to Louis in effort to make amends. But by then it was too late.

The whole firm knew about Harvey and it doesn’t take a genius to trace a leak.

Harvey’s stance at the firm was holding on by a single thread and his protege was completely unaware of what was going on. Mike had taken on a case as a favor to a friend and Jessica had shut him down. She didn’t want to fund a case the firm was barely going to be making a profit from. And so Mike was busying running around the city looking for funding.

And if it wasn’t his case then it was Rachel and her dad. Rachel’s father had drawn a prenup for her and Mike. He said he just wanted to make sure that she was safe. Though Rachel was do everything in her power not sign it.

Now whether that was her rebelling against her father or suddenly sprouting cold feet is kind of up in the air. But Mike did talk her father into looking at this case he took for Jimmy.