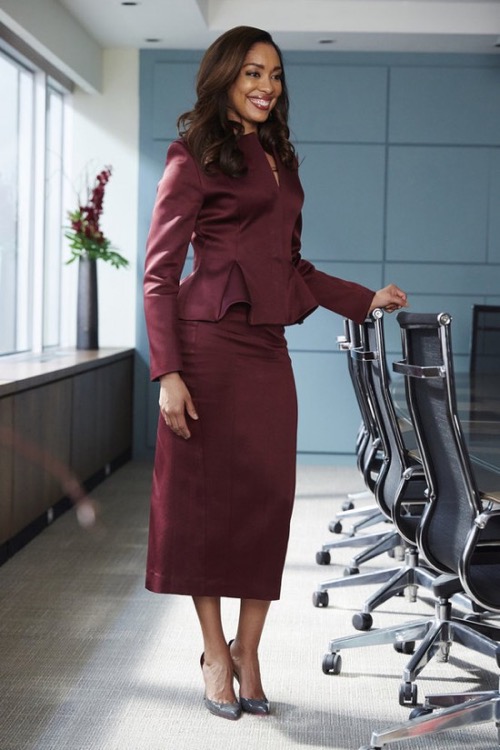 SUITS returns to the USA network tonight with an all new Wednesday July 8, season 5 episode 3 called, “No Refills.” We’ve got your recap down below! On this evening’s episode, Harvey [Gabriel Macht] brings in star power to help with his ongoing conflict with Jack; [Pyper Ferguson] and Mike [Patrick J Adams] adds Robert Zane [Wendell Pierce] as co-counsel in a case. In other events, Jessica [Gina Torres] mediates between Mike and Zane; and gives Rachel an unusual assignment.

On the last episode Harvey (Gabriel Macht) searched for a replacement for Donna (Sarah Rafferty). Mike (Patrick J. Adams) took a case as a favor, which he must justify to Jessica (Gina Torres) – while Rachel’s (Meghan Markle) father, Robert Zane (guest star Wendell Pierce), offered some unsolicited advice about Rachel’s engagement to Mike. And Louis (Rick Hoffman) was embroiled in surprising money matters, while an up-and-coming partner, Jack (guest star John Pyper Ferguson), made his presence known to Jessica, confronting her about whether Harvey’s way of doing business was beneficial to the firm. Did you watch the last episode? If you missed it we have a full and detailed recap, right here for you.

On tonight’s episode per the USA synopsis “Harvey (Gabriel Macht) brings some star power to his ongoing conflict with Jack Soloff (guest star John Pyper Ferguson) – a conflict that Louis (Rick Hoffman) and Donna (Sarah Rafferty) can’t seem to stay clear of. Mike (Patrick J. Adams) brings in Robert Zane (guest star Wendell Pierce) to co-counsel a case, pitting his instincts as a lawyer against his desire to stay in his future father-in-law’s good graces. And while Jessica (Gina Torres) mediates between Mike and Zane, she tasks Rachel (Meghan Markle) with an unusual assignment.”

Rachel’s father, Robert Zane, is a big a name, particularly among lawyers, and when Mike willing attached himself to it then there was just no way Jessica could tell him to back off from a case that wouldn’t be bringing in any money.

On tonight’s episode, there appears to be a power struggle. Jessica couldn’t turn someone like Robert away because it would have then made her look weak. She had to agree to allow Mike to work with him.

Which at any other time, Mike could have bragged about. But lately Harvey hasn’t been in the mood to talk. And when he did finally reach out to his protégé, he took what Mike was doing as a personal betrayal.

Earlier, Harvey was told to make nice. Jessica basically demanded that he find some way to end this feud with both Jack and Louis. Because it was simply bad for business.

Though, thankfully, Harvey no longer has to worry about Louis. It seems the other man had a change of heart after he did what he did. And now Louis actually feels really bad. So Louis dropped the vendetta but, for Jack, this is still personal.

And Jessica told Harvey that she didn’t want to have clean up at the office.

Harvey played nice guy for about a minute. He tried to get Jack courtside tickets and thought maybe they could bury the hatchet if he were also able to introduce the other man to Charles Barkley. The information he received regarding Jack’s interest was deliberately misleading. In fact, it was wrong. And Jack ended up laughing in his face when he made it clear that he didn’t care about basketball.

But no one laughs at Harvey. And later his assistant helped him come up with a plan. They found out that Jack’s biggest ally was the real Charles Barkley’s fan and they used this info to steal Jack’s client from right underneath him.

Jack was of course furious when he found out. But if he was looking for tea and sympathy with Jessica then he didn’t find. Jessica knows what he and Louis did so she’s not standing by either of them if a small disagreement turns into open warfare.

Hence Jack got desperate. He threatened Jessica and told her that most of the partners were in his pocket anyway and she in turn took what he said as a challenge to her position. So Jack went from a small fight with Harvey to a full-blown confrontation with Jessica.

And so then he needed help.

Jack tracked down Louis and, in exchange for not telling anyone what Louis did with Harvey’s old paychecks, Louis had to help him to get pass certain bylaws.

Jack wanted to take away all of Harvey’s special compensation, so he had Louis do some more dirty dealing and found a way to work outside company rules. However, after he confronted Harvey, Harvey made it known that he would steal each and every one of Jack’s clients.

And while this wasn’t true at the time, Harvey eventually got Mike to make it look as if he already done so. Mike had seen Harvey in a middle of a panic attack for himself. Thus he knew he couldn’t abandon him when he was so clearly needed.

Mike did a favor for Harvey and that made him slightly late for court. But luckily Mike still managed to make a good impression on his future father-in-law.

They hit a few bumps though nothing to make Rachel worry.

And as for Harvey, he returned to therapy. He stopped going once he felt like he had everything under control but as it turns out he needed actual help. So Harvey found his old therapist and he told her that he was going to start following up on her suggestions.