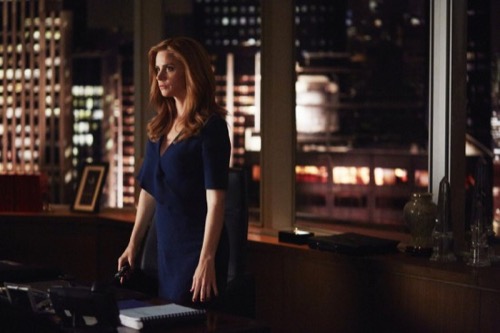 SUITS returns to the USA network tonight with an all new Wednesday August 12, season 5 episode 8 called, “Mea Culpa.” We’ve got your recap and spoilers down below! On this evening’s episode, Jessica [Gina Torres] performs damage control following the Harvey-Louis incident; and Donna [Sarah Rafferty] counsels the men on how to solve their issues.

On the last episode Mike teams with Jack Soloff on a case; Esther Litt returned to P.S.L. in hopes of discreetly solving a problem; and Donna and Harvey tried to return their friendship to normal. Did you watch the last episode? If you missed it we have a full and detailed recap, right here for you.

On tonight’s episode per the USA synopsis “Jessica performs damage control following the Harvey-Louis incident; and Donna counsels the men on how to solve their issues. Mike, meanwhile, searches for a way to turn down his announced promotion without raising suspicion.”

Jessica went into overdrive the moment she found a bleeding Louis on the ground and Harvey standing over him. But on tonight’s episode of “Suits”, while she’s so busy running around to put out fires, Jack Soloff ended up seeing her underbelly.

Thus, when Jessica realized that she had allowed herself to be vulnerable in front of enemy, she then went out and did something odd. She went back to Mike and she told him to forget what she had said earlier because she was going to be promoting him to junior partner. And that as a tradition, it was her place as a managing partner to give him his first job in his new positon. So right after Jessica gave him his first ever case to take the lead on – Mike got ecstatic. He thought all his dreams must have come true for Jessica to have changed her mind.

However, there turned out to be a downside to the case Jessica gave him. Like the opposing lawyer being an ex of his and who knew a little too much about his sketchy past with law school. So what that meant for Mike, was that he was only ever going to get one shot at this being a junior partner because if he made one wrong move with his ex – then his career would have been over!

Much like Harvey’s career! See, both Harvey’s therapist and Jessica had asked in their own way for Harvey to apologize. Yet Harvey didn’t feel like he had to. Louis after all was the one that had come gunning for him so to Harvey that means he was justified in hitting the other man.

But what happened between the two men was more than just a punch and a failed punch (on Louis’s part). That fight hurt both men on a personal level. So eventually Harvey was talked into going to Louis and simply explaining his position.

And, surprisingly, Louis was open to what Harvey had to say.

Particularly as Harvey told Louis everything. He mentioned his therapy and how Louis had said a few things that were triggers for him. And afterwards Louis told him that he could come back to the office. He said that he was willing to let bygones be bygones.

And unfortunately that was all an act on Louis’s part because he really cane be quite vindictive. Which means that later during the partners meeting – he brought up his fight with Harvey. Then demanded that Harvey be suspended. As per their company’s bylaws.

Thus Harvey was left feeling quite pissed. And he followed Louis into the bathroom in order to confront him.

He had honestly opened up to someone else and Louis literally threw all of that away. It seems he believed that Harvey had been lying about his panic attacks and therapy. So Louis felt righteous for tricking Harvey into coming back only to be suspended.

But Harvey had told him the truth and not long after their last meeting, Donna had apparently grown curious. She questioned Louis about what he had said to Harvey to get him to punch him. And then began to suspect him when Louis refused to say.

Though, the one thing everyone pretty much agreed on is that they didn’t like how Louis used Mike’s promotion to lure Harvey out into the open so to speak.

Technically Harvey wouldn’t have gone to that partners’ meeting if it were not for Mike. So that was a low blow on Louis’s part. And even Mike was left upset by the ploy.

Mike normally would have done something after that but the case with his ex had gone off kilter. Not long after he realized he couldn’t be seen by his ex, Mike put Rachel in charge of his case and sadly she committed one blunder after another. Until nothing either of them did could possible hide the truth.

And once it was out there, Rachel had to take care of it. She talked to Claire and she convinced the other woman not to press formal charges with DA for fraud.

However Mike wanted to know why Claire back down. So he later approached her and asked her why she didn’t say anything. And she said she couldn’t be the one to bust the bubble for Rachel. Not, at least, when she knew it was going to happen one day anyway.