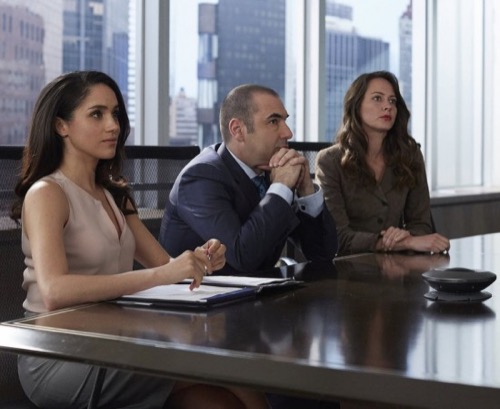 SUITS returns to the USA network tonight with an all new Wednesday August 5, season 5 episode 7 called, “Hitting Home.” We’ve got your recap down below! On this evening’s episode, Mike [Patrick J. Adams] teams with Jack Soloff on a case.

On the last episode Harvey reeled from Dr. Agard’s revelation about the root of his panic attacks; and had to make a tough decision in a case that touched a nerve. In other events, Mike and Louis took over responsibility for Harvey’s oldest client; and Donna tried to make Rachel’s dream wedding possible. Did you watch the last episode? If you missed it we have a full and detailed recap, right here for you.

On tonight’s episode per the USA synopsis “Mike teams with Jack Soloff on a case; Esther Litt returns to P.S.L. in hopes of discreetly solving a problem; and Donna and Harvey try to return their friendship to normal.”

Harvey returned to therapy on tonight’s episode of “Suits” and it seems he was finally ready to open up. For the first time, he admitted to Dr. Agard that he walked in on his mother entertaining another man in his room.

Apparently, it happened right after he had been sent home early from school. He had been feeling sick and the school back in those days would let the kids get home on their own accord. So there was Harvey, fresh out of school early, and not feeling well when he heard noises coming from his parents’ bedroom.

The curious kid went to investigate the noise and he saw a strange man buttoning up his shirt but his mom then told him it was their cousin, Cousin Scott. And that his dad didn’t need to know that Cousin Scott had come over.

So that’s been the root of all of Harvey’s trust issues and it was breakthrough for therapy. However the meeting itself put Harvey on edge. And that wasn’t a good thing when he found out about Jack Soloff. Jack Soloff had come close to ruining the man Harvey first signed.

Meaning, in this war between himself and Jack, Jack was the one that tried to make it personal. And Harvey wanted to react. Probably in the most foolish way what with his anger running high. Yet Jessica stepped in and stopped him.

Jessica had warned Jack the last time he crossed her but that doesn’t mean she trusted him when he later approached Mike. He said he wanted to make peace. You know as a way to apologize to Mike for nearly ruining his deal but who can say with a man like Jack. He’s taken every opportunity in the pass to double cross Louis/Harvey/ and Jessica.

So Jessica had Mike watching Jack and she commanded him to work with the other man. Although those two ended up running into issues.

There were several incidents when Mike accused Jack of dirt dealing only for it to be revealed that Jack was actually doing the job they were asked. So as they were working together – Mike came to have a change of opinion about Jack. And he showed another side to himself while they were “bonding”.

Mike showed Jack that he too could play hardball and his tactics might not be so naive. Especially when it comes to big company trying to rip-off the little guy.

So Jack and Mike came to respect each other in the end. And Mike even vouched for him to Jessica. However she couldn’t allow, whatever they were having, to continue. Not when Jack had followed up their working together to nominate Mike for Junior Partner. A position that Jessica told him he had to give up.

Jessica said she couldn’t release an announcement about a Mike from Harvard when they both knew that to be a lie.

And so she tried to talk Mike from accepting the nomination. While she tried to counter that by saying no one in their right mind would turn down a nomination. Thus with those two at cross-purposes, there was no one to intervene between Harvey and Louis.

Louis’s sister Esther had come to firm needing representation in a lawsuit. First she went to Harvey and when he turned her down – she went to her brother. But once the case settled, all Esther wanted to do was to talk to Harvey. A man she had apparently slept with after he wrapped up her divorce proceedings.

Only Harvey wasn’t in the mood. He had spoken about what happened between him and Esther to his therapist and she said that sounded just like the incident with his mother because Harvey had promise Louis that he wouldn’t cross that line. Then he did and afterwards he made Donna cover for him.

So that was like when his mother made him lie and probably rationalized that it was better for her husband not know.

And after he had spoken with his therapist, Harvey decided to pick up where they left off with Esther and simply be honest with Louis. But Louis found out about Harvey breaking his word and tried to attack him.

Safe to say that didn’t go well and Louis was left injured after getting pushed and falling through a glass table. So this mess could be just the thing that forces Jessica’s hand in choosing between them. And though Harvey is her golden boy, the fact assaulted a named partner means he’s finally come down in her eyes.