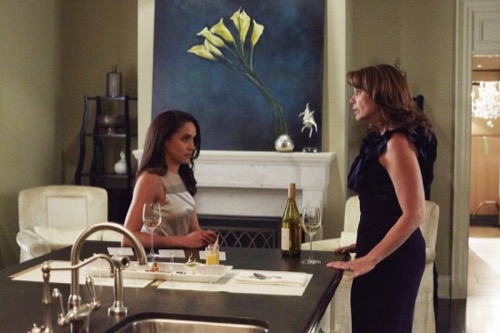 SUITS returns to the USA network tonight with an all new Wednesday August 19, season 5 episode 9 called, “Uninvited Guests.” We’ve got your recap down below! On this evening’s episode, Rachel [Meghan Markle] and her mom plan for Rachel’s dream wedding, but Rachel worries that the event could reveal Mike’s [Patrick J. Adams] secret.

On the last episode Jessica performed damage control following the Harvey-Louis incident; and Donna counseled the men on how to solve their issues. Mike, meanwhile, searched for a way to turn down his announced promotion without raising suspicion. Did you watch the last episode? If you missed it we have a full and detailed recap, right here for you.

On tonight’s episode per the USA synopsis “Rachel and her mom plan for Rachel’s dream wedding, but Rachel worries that the event could reveal Mike’s secret. In other events, Daniel Hardman and Jack Soloff make their move against Jessica and the partners; Harvey and Mike tangle with Hardman’s mysterious backer; and Louis tries to find Jack’s weakness.”

Daniel Hardman has made a move against the firm on tonight’s episode of “Suits” and it seems he finally convinced his former protégé to join him over on the dark side because Jack was the one that set everything into motion.

See Harvey’s suspension had been put in front of the board and because the vote was split – Harvey was allowed to get away with what he did to Louis. And didn’t even have to suffer the humiliation of being put on probation. However with the board of partners all convened – Jack had the perfect opportunity to put something to vote.

And so he asked that Daniel Hardman be reinstated. Daniel had recently signed on a big client and if he joined the firm then all that money would be coming with him. But before Jack could go on about the benefits of taking Daniel back, Jessica ended the meeting. She said she would never allow that man back into the firm and that it didn’t need to a board vote.

Yet, by doing this, she played right into Daniel and Jack’s hands. For they knew she was going to turn them down and they wanted that to come back and bite her.

Their actual plan was to get turn down and then use Daniel’s new client’s resources to slowly bleed money from out of the firm. That way they the firm would eventually have to take Daniel back just so they wouldn’t lose everything. And afterwards everyone would pretty much remember that it was Jessica that had set everything in motion.

Meaning they’re setting everything up so that Daniel could come back and once again try to take over. However Mike has found out where Daniel and Jack want to hit first. So they’re doing everything they can to protect they client from a fallout.

Especially Harvey. Dominic Barrone was the first client he ever signed on at the firm so he’s sentimental to Harvey and Mike knows that.

So while they’re running around the city in order to protect this Mr. Barrone, things weren’t going so well back at the office. It seems Rachel has gotten into a big fight with her mother about her wedding. Apparently the older woman wanted to throw a big society wedding with announcement in the newspaper and this huge attendance for the happy day. But Rachel couldn’t all that to happen.

Not when her fiancée is technically a fraud.

Which meant Rachel was stuck. She couldn’t tell her mother the real reason her future husband shouldn’t be splashed across newspapers and all she could come up with as an excuse was that she wanted a small wedding. Though her mother didn’t really but that.

Even when she was small, all Rachel talked about was a big wedding at the Plaza. So for her to suddenly change her mind didn’t exactly make sense. And that’s why Rachel mother reached out to Mike.

She wanted to know what was going on and Mike took the blame for the scale down wedding. But after their conversation, he got to thinking that maybe he shouldn’t marry Rachel. Not when he was taking away her dream wedding and every decision they make could lead to his arrest.

Though they later talked it over and for now they still wished to be married despite what that might lead to.

And at the firm, Harvey realized who had been secretly funding Daniel’s personal vendetta. So he went to visit Charles Forstman in prison and he tried to find a way to stop him. However the only way to end Charles’s money pit of a vendetta was for him to resign.

So Harvey has to make a decision. Will his quit job in order to save the firm or will he stay on in hopes of fighting?

But in a funny case of irony, Mike sought out his old friend Trevor and he was going to invite him to the wedding. Trevor though refused the invitation. It seems he turned his life around and now he’s the one that doesn’t want to be associated with Mike.