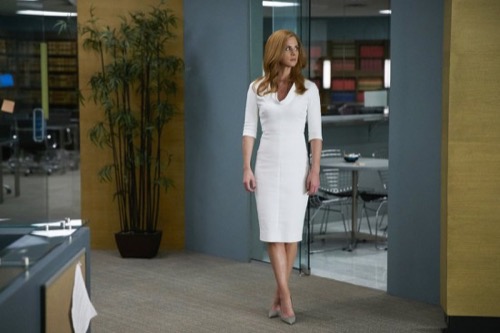 SUITS returns to the USA network tonight with an all new Wednesday August 26, season 5 episode 10 called, “Faith.” We’ve got your recap down below! On this evening’s episode, In the Season 5 summer finale, Jessica (Gina Torres) and Louis (Rick Hoffman) try to rally the partners to stop the takeover attempt by Hardman (David Costabile) and Soloff. (John Pyper-Ferguson)

On the last episode Rachel and her mom planned for Rachel’s dream wedding, but Rachel worried that the event could reveal Mike’s secret. In other events, Daniel Hardman and Jack Soloff made their move against Jessica and the partners; Harvey and Mike tangled with Hardman’s mysterious backer; and Louis tried to find Jack’s weakness. Did you watch the last episode? If you missed it we have a full and detailed recap, right here for you.

On tonight’s episode per the USA synopsis “in the Season 5 summer finale, Jessica and Louis try to rally the partners to stop the takeover attempt by Hardman and Soloff. In other events, Mike and Harvey each face down past demons in order to make potentially life-altering decisions.”

Jack and his very vindictive mentor have made their move on tonight’s episode of “Suits” and they’ve called for a vote to replace Jessica as managing partner.

Now Jessica could fight this hostile takeover but she’s facing a losing battle without either Harvey or Mike at her side. And unfortunately she knows it. So she’s getting desperate and the only men that she knows she count on are elsewhere going a spiritual evaluation.

Harvey if you recall has been doing some very extensive form of therapy and recently he asked his doctor to clear her whole schedule for the day so that he could finally talk about the end of his parents’ marriage. And seeing as that’s normally one topic he’s always done his best stay away from, Dr. Agard knew she couldn’t let this opportunity to pass.

However Harvey was so immersed with going down memory lane that he completely stopped answering his phone and simply chose to keep it off for convenience sake. Thus Jessica couldn’t get into contact with him and no matter how much she threaten Harvey’s assistant – the other woman wasn’t going to crack. And on top of that with no Mike – there went Jessica’s last chance at finding Harvey.

Mike had chosen the worst day in the world to take a personal day and had it all to do that unfriendly visit he had last week. Trevor had told him that he no longer wanted Mike to contact him if the other man was going to continue living his life as a fraud. And he didn’t just leave things there. He also told Mike not to ruin Rachel’s life by having her continue with his lie.

So that got Mike to thinking and he realized he needed to return home. He went to go visit his old neighborhood priest and he wanted Father Sam Walker to assure him that he was still a very good person. And that was something the Father felt particularly conflicted about.

Mike had had some issues in his youth. He rebelled, he stole, and he simply did not want to listen to those around him. But the Father had given him a second chance back then that he’s now wondering did more harm than good.

See Mike had stolen from the church. He had taken over nine hundred dollars that he had added up to how much his parents had put in every week before their deaths. And the Father knew that it had been Mike yet he didn’t call the police. Instead he talked it over with the young man and he somehow convinced to start taking his life seriously.

But looking at Mike now and the position he’s in, the father confessed to regretting his earlier decision.

He wasn’t sure about this man that Mike had become or why Mike had even visited him. And Mike kept skirting around his real issues in order to avoid the conversation he knew he didn’t want. So the Father, who had known Mike his whole life, knew he had to confront Mike to get him to open up.

And that’s when Mike revealed his fears. For he does know that one day he has stop pretending with his law degree and the reason he’s dragging his feet on this is because once he’s no longer the man that Rachel met – he’s afraid she’ll leave and he’ll be alone again. Like he was after his parents died.

Though, his lack of faith is something the Father had grown used to. So he was there to comfort Mike and help him get over the loss that has always haunted him.

And in that respect, Dr. Agard did the same for Harvey. Harvey never admitted out loud how much he had done to cause his parents’ marriage to implode. Nor did he discuss any of his regrets about the way he handled things.

However, finally taking responsibility about his past had made now make the best decision he could for the firm. So right before Jessica could be ousted – Harvey officially resigned thereby ensuring the vendetta that Daniel was pulling lost all its funding. And that meant Jack Soloff was then on his own when it came to trying to remove Jessica from her position.

So, in the end, Jessica was allowed to stay on as managing partner but she lost Harvey and that’s something she wasn’t going to accept without a fight.

Yet Harvey wasn’t the only one to resign. Mike ended up doing so as well and Rachel was actually quite pleased about them finally having a chance at a normal life. But just before Mike met her at the elevator with his box of things – the police came by to arrest him for fraud.