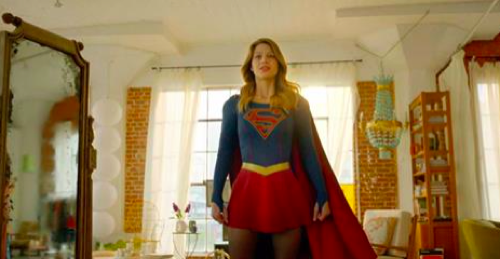 Tonight on CBS Supergirl starring Melissa Benoist airs with an all new Monday November 16, season 1 episode 4 called, “How Does She Do It?,” and we have your weekly recap below! On tonight’s episode, Kara (Melissa Benoist) is pulled in two directions when babysitting Cat’s son, at the same time, National City is hit by a series of bombings.

On the last episode, one of Superman’s enemies was gunning for Supergirl, whose powers were tested when the formidable Reactron arrived in National City; at the same time, Cat made plans to run an exposé on the young hero. Did you watch the last episode last season? If you missed it, we have a full and detailed recap right here for you.

On tonight’s episode as per the CBS synopsis, “Kara is pulled in two directions when babysitting Cat’s son, at the same time, National City is hit by a series of bombings. Meanwhile, James feels conflicted when his ex-girlfriend Lucy Lane tries to rekindle their relationship.”

This is definitely one series that you don’t want to miss. Don’t forget to stay tuned to Celeb Dirty Laundry where we will be live blogging the Supergirl season 1 episode 4.

Its Thanksgiving for National City and this year Kara wanted everyone to be on their best behavior.

It seems that in the past there has been a few issues between Kara’s sister Alex and foster mom Eliza Danvers. However she wanted those two to have a better relationship. So, unlike in the past where she may have tried to stay impartial, Kara told Alex that if she felt like their mom was coming down on her then maybe she should sticking up for herself.

And as it turns out that was sound advice. Apparently Eliza had always believed that it was Alex job to help her sister fit, find a boyfriend, and practically be Kara’s shield against the whole cruel world. But Kara hadn’t seen it that way growing up and just thought the parental judgement that Alex was feeling was in fact a figment of Alex’s imagination.

Yet it wasn’t. The first thing that Eliza Danvers did upon actually spending some alone time with Alex was to task her daughter to task for letting Kara reveal her powers. And, like she had done before, she was hoping to make Alex feel guilty for her supposed actions or lack thereof.

Only Alex was over it this year. She had taken a job at the DEO in order to keep an eye out for her sister and had literally done her best for what was most of her life to keep her little sister safe. So eventually she told her mother everything and that ended up in a fight that destroyed thanksgiving dinner.

Though, Kara had a lot more things to worry about other than her family. She had saved the life of a radio shock jock earlier that day and unfortunately there was an incident. For it seems while she pulling the woman out of a crashing helicopter – lightning hit Kara and passed through her as if she was a conductor to Leslie Willis. So Leslie had been affected and immediately taken to the hospital.

But when Leslie later woke up, she was different. As in she suddenly powers different and wanted to use said powers against the woman she blamed for putting her in the helicopter in the first place – Cat Grant.

It looks like Ms. Grant had once taken Leslie under her wing and had even given her a larger audience on the radio. Yet their relationship began to change when Supergirl entered the picture and Leslie had been too gung-ho on her criticism. So Cat had pulled her from her prime slot she was in and was going to make her do the traffic report from the helicopter until Leslie’s contract ran out.

So now Leslie is gone because she refused to follow Ms. Grant’s lead and Livewire lives in her place!

And Livewire blames Cat Grant for her current condition. Therefore it wasn’t long before the woman that was turned into living energy went on to steal even more from electricity from the city by sending everyone into a blackout. Right on Thanksgiving.

Then Livewire tried to break into CatCo. in order to kill Ms. Grant but thankfully she was stopped by Kara. Kara had gotten a distress call from her boss and didn’t really want to stick around for more fighting in the family. So in truth she showed up at the perfect time. And had come up with a plan when she failed to apprehend Livewire after their first battle.

See, Kara figured that the one thing Livewire couldn’t deal with was water because as everyone knows water and electricity just don’t mix.

So acting as Supergirl, Kara and Ms. Grant talked things over and they came up with a plan that they knew would lure Livewire to them. And all they had to do was use Ms. Grant as the bait. Which was Grant’s idea by the way. Not Kara’s!

And later when Livewire fell into their trap liked they planned – Kara was able to devoid the other woman of energy and hand over to the DEO without a problem. But it seems that the DEO might actually be a problem if Eliza to be believed.

Eliza and Alex had gotten over their issues in the end and once she had been assured that both of her daughters knew how much she loved them – she told them about their dad. She said her husband had gone to work for the DEO when Kara was young because that was the only way to keep her out of the DEO’s hands at the time. However Eliza’s husband later died under mysterious circumstances and all Eliza was told that it had been an accident.

So after Eliza left, her girls realized something. They knew they wanted to get answers about their dad, but without saying so, they no longer trusted the DEO to be honest with them.