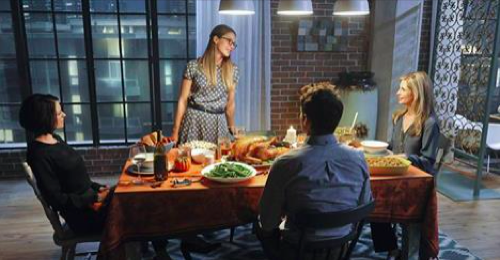 Tonight on CBS Supergirl starring Melissa Benoist airs with an all new Monday November 30, season 1 episode 6 called, “Red Faced” and we have your weekly recap below! On tonight’s episode, stress and anger get the better of Kara (Melissa Benoist) when she goes too far during a training exercise with Red Tornado.

On the last episode, Kara was conflicted babysitting Cat’s son, at the same time, National City was under attack. Meanwhile, James felt unsettled when his ex-girlfriend Lucy Lane tried to be a part of his life. Did you watch the last episode last season? If you missed it, we have a full and detailed recap right here for you.

On tonight’s episode as per the CBS synopsis, “Stress and anger get the better of Kara when she goes too far during a training exercise with Red Tornado, a military cyborg commissioned by Lucy Lane’s father, General Sam Lane. Elsewhere, Cat’s tough exterior is shaken by a visit from her judgmental mother, Katherine; at the same time, Alex enlists Winn to investigate her father’s mysterious death.”

This is definitely one series that you don’t want to miss. Don’t forget to stay tuned to Celeb Dirty Laundry where we will be live blogging the Supergirl season 1 episode 6. What are your thoughts on Supergirl so far? Sound off in the comments and let us know!

Maxwell Lord is leading the troupe on tonight’s all new episode of “Supergirl”. It seems there was a movement in the making that wanted to put sanctions on Kara and her like because, as they say, aliens can’t always be trusted in the line of duty.

So these people like Maxwell wanted to find some way to monitor the aliens and thus far they managed to come up with ideas such as body-cams. And other general ideas that unsurprisingly made Kara out to be another hothead with too much power out on the street. Though, honestly, Superman had to face a bit of the same thing.

He also had people whose sole intent was to make him look like a threat to National Security and the one thing that he has working for him was that he’s never publicly lost his temper. And so Kara thought she would be given the same amount of time or respect to find her own footing. Even though she did get into a public altercation with guy that had been in the wrong when he had almost driven into a group of children.

Yet this time around the military was actually taking steps to cut Kara and eventually all superheroes out of the picture. General Lane (Lucy and Louis’s father) had come to town and he demanded that Supergirl fight his latest robot prototype. And seeing as he also had a letter signed by the president in his back pocket, Kara was forced to test out her skills against a man-made machine.

And unfortunately she finally let go of the strenuous hold she has on her temper. So Kara just went for the robot and she continued to beat it senseless long after she had gotten the command to stop. Therefore, when she did let up, she was blamed for the Red Tornado malfunctioning because it literally flew away after their battle.

Though technically she hadn’t been at fault for the Red Tornado and once the General calmed down – he fired the doctor that had created the Red Tornado but didn’t know how to stop it. And stopping it was a necessity. Following their fight, the Red Tornado flew back to National City and began to cause problems for everyone.

So Alex tried to prevent a disaster and she went to the one person that her sister would never have asked for help. She went to Maxwell Lord’s office and practically pleaded with him. Apparently she knew about his earlier incident with Kara and figured if he could find a way to track Supergirl then maybe he could track Red Tornado as well.

And as luck would have it, Maxwell did call Alex back to his office. He said he had way to help her and yet the first thing he did was offer her seat at a table set for two.

But that just seems to be the way Maxwell wishes to do his business because he did eventually get down to business. He told Alex that the Red Tornado’s arm was in fact a pretty looking drone. So while the DEO believed they had to track the monster, Maxwell told Alex that they instead should be tracking Frankenstein himself.

Dr. Morrow had only pretended to lose control of the Red Tornado yet he had been secretly telling it was to do this entire time. And even going as far to upgrade it since Kara last fought the machine. Therefore it was the doctor that was out of control.

He had initially been hired to build a robot that could fight Kryptonians (the General kept that secret well-hidden) and it looks like he let that part go to his head.

Plus the doctor had personal grudge against General Lane for shelving his pet project. So those things in combination helped the DEO figure out a plan. Henshaw used Kryptonian crystals to send 3D images of the General miles outside of city limits and when the Red Tornado touched down ready to fight what Morrow thought was the General – Kara showed up.

She began fighting the robot while her sister was off fighting Morrow himself. As it turns out, Morrow was using his cerebral function to control the machine and that meant he had to die in order to stop it. And though she didn’t actually want to kill someone, Alex was left with little choice in the matter.

However the Red Tornado became self-aware after its master died and it took all of Kara’s strength to both fight it and defeat it. And in the aftermath, there appeared to be something wrong with her. She had gone back to CatCo and tried to clear away some broken glass when one of the shards was able to cut her.

As in leave her bleeding when that’s never happened before.

So what’s going on with that and why was all the files on Alex’s father redacted by Henshaw? Winn had been asked by his friends to look into their father and the only information that remain legible stated Henshaw was the last person to see their dad before he disappeared.