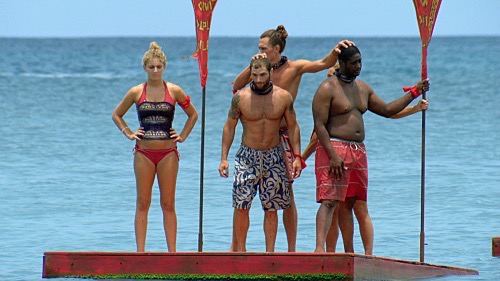 Tonight on CBS their Emmy Award-winning series Survivor 2015 Worlds Apart airs with an all new Wednesday April 15 season 30 episode 9 called, “Living on the Edge,” and we have your weekly recap below! On tonight’s episode, one castaway creates a fake idol to prevent being eliminated.

On the last episode, castaways walked a fine line and struggled to stay balanced at a reward challenge. Also, one castaway went on a crazy man hunt to prevent another castaway from finding the idol. Did you watch the last episode? If you missed it, we have a full and detailed recap right here for you.

On tonight’s episode as per the CBS synopsis, “one castaway breaks out their arts and crafts skills to create a fake idol and makes a plan to prevent being eliminated.”

Tonight’s season 30 episode 9 looks like it’s going to be great and you won’t want to miss it, so be sure to tune in for our live coverage of CBS’s Survivor 2015 Worlds Apart episode at 8:00 PM EST! While you wait for our recap hit the comments and let us know how excited you are about season 30.

#Survivor begins after Tribal Council as the survivors head back to camp. Dan criticizes Shirin for not knowing the difference between a flip and a blindside. She calls Dan a know it all. She’s hoping someone is ready to make a big move with her and wants to shake things up. Rodney thinks Dan is wrong about flippers not winning. He says he plans to flip at the right time. He’s ready to take out the other blues. A fierce lightning storm blows in and Jenn says she’s stoked to get voted out since Hali is gone. Shirin needs her to stick around so be an ally.

Day 23, Shirin talks to Mike and Sierra about forming an alliance and she suggest taking out Carolyn since she has Tyler and Will in her pocket. She agrees to vote out whoever they want. Jeff welcomes the survivors to today’s #RewardChallenge. They will be split into two teams and they must go through water obstacles one at a time. Then they use a grappling hook to grab five rings. They are shown the reward – it’s a trip to the chocolate cafe. They see M&Ms, Snickers, Twix and Dove chocolates.

Mike, Tyler, Shirin, Dan and Sierra against Rodney, Joe, Jenn, Carolyn and Will. They start with Mike and Rodney facing off. Mike pulls ahead but Rodney is close behind. The last stage is a balance beam. Mike lands first and Rodney a few seconds later. It’s Will versus Dan. They are both so awkward and inept they both take a tumble on the slide. Dan pulls way ahead and Will takes another tumble. Next is Tyler versus Carolyn. Tyler falls and has to restarton the balance beam but so does Carolyn.

Tyler pulls ahead of her and then it’s Jenn versus Shirin and Shirin has a sizable lead but Jenn catches up. Jenn catches up and Shirin falls on the balance beam and has to start over. This puts red in the lead. Joe is in for red and he catches up to Shirin and is on the platform right after Shirin. Sierra is trying to make up time for blue and the other team is already with the grappling hook. Sierra makes it and they’re even again.

Jenn whines about not winning but Joe says this is what Survivor is about. The winners get lots of chocolate plus popcorn, lemonade and iced tea. Back at camp, the others commiserate. Rodney is made he didn’t win reward. Rodney says he’s happy that they’re going to eat a chicken. Jenn is upset about them eating the chicken. She says this isn’t fun and she thinks the chickens are hers since she’s taking care of them and says they should have asked her.

Rodney imitates Mike for the others and they all laugh. Rodney then does Dan. They all laugh and encourage him to keep going. Joe wonders if he can use it to his advantage that Rodney doesn’t like Mike.

They get tree mail the next day that says to keep on your toes. Joe says he has a lot of pressure on him going into the #ImmunityChallenge. Joe, Shirin and Jenn are all at the bottom and Jenn says she’s going to give them a reason to kick her out and tells Joe that if she wins immunity, she’ll give it to him. It’s time for the #ImmunityChallenge. Joe hands back the necklace. In the challenge, they have to put a block on their head and then stand on their tiptoes to press the block into a board over their head.

They each have one set specifically for his height. Carolyn is out first and early on then Will too. Shirin falls out too and it’s down to seven. Rodney is out next then Dan. Sierra drops. Joe drops out too. It’s down to Jenn, Tyler and Mike. Mike falls out next and its Jenn and Tyler. After 30 minutes, they are still there but both are shaky. Jenn loses it and Tyler wins individual immunity. Back at camp, Joe talks to Shirin who runs the numbers and she says the way the votes will fall it should be four against Joe, four against Jenn and she could swing it.

Jenn is asking people to vote for her and then Will, Tyler, Mike and Dan talk about splitting the vote between Jenn and Joe just like Shirin predicted. Mike goes to Shirin and tells her to vote for Joe. Shirin says Joe is a bigger threat but Jenn really wants to go home. She’s deciding if she wants to rock the boat. Joe goes to talk to Dan who says he can’t help him. Joe then runs off into the jungle to make a fake immunity idol from supplies he’s stashed. Since he’s a jewelry maker, he does an impressive job. It looks real.

Joe says he can sell it if no one else has found the real one. Joe says he’ll vote Jenn if Mike can promise that he’ll be loyal to him. Joe says he can’t let Mike have the idol before tribal. Mike says if he’ll give him the idol tonight, he’ll switch his vote. Mike thinks there’s a chance that there could have been a second idol. Joe hands it off to Mike when they sit down at #TribalCouncil. Hali comes in as the first jury member. Jeff asks Jenn if she’s ready to go or not.

He says she groused then tried hard at the immunity challenge. Jeff asks what she would have done if she won immunity and she says she would give it to Joe to piss everyone off since everyone is after him. Jeff says she can just get up and walk out and save Joe tonight but Jenn says that’s quitting and she won’t quit. Joe says he wants to be there and play and has been waiting for years to be there. He says Jenn is getting pulled along for the ride and someone may keep her to beat her at the end.

Shirin says Jenn doesn’t want to be there but she gets what Jenn is thinking. She says everyone wants Joe out because they see him as a bigger threat. She says she wants to keep Jenn there to be an ally. Mike asks if Jeff can verify something for him and asks if it’s a hidden immunity idol. Jeff says he can’t verify until he plays it. Mike says it’s a determining factor if someone stays. Tyler votes for Jenn. Rodney votes for Joe. Joe votes for Jenn.

The votes are in and Jeff goes to tally the votes. Jeff comes back and calls for hidden immunity idols. Mike hands over the one Joe gave him and says it’s for Will. Jeff says it’s not a real idol. Jenn laughs. The votes are: Jenn, Joe, Jenn, Joe, Dan, Jenn, Joe, Jenn, Joe and then Joe. He’s the second jury member and leaves the game. Jeff says they carried out a standard survivor strategy – to get rid of a threat when you can. Joe says he tried to stay in as long as he could and feels like he had more game left to play. He says it was worth it and would do it again in a heartbeat.