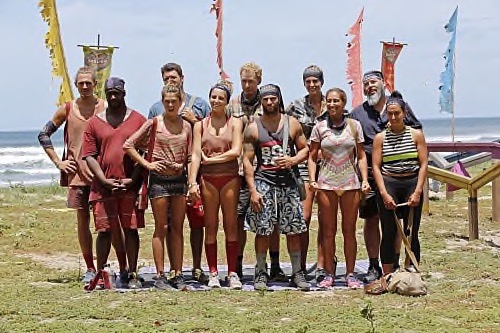 Tonight on CBS their Emmy Award-winning series Survivor 2015 Worlds Apart airs with an all new Wednesday April 8 season 30 episode 8 called, “Keep It Real” and we have your weekly recap below! Tonight, Another castaway is voted out of the game.

On the last episode, alliances were tested as castaways had to adapt to playing an individual game after the merge. Also, the castaways fought for individual immunity in a classic game of endurance. Did you watch the last episode? If you missed it, we have a full and detailed recap right here for you.

On tonight’s episode as per the CBS synopsis, “castaways walk a fine line and struggle to stay balanced at a reward challenge. Also, one castaway goes on a crazy man hunt to prevent another castaway from finding the idol.”

Tonight’s season 30 episode 8 looks like it’s going to be great and you won’t want to miss it, so be sure to tune in for our live coverage of CBS’s Survivor 2015 Worlds Apart episode at 8:00 PM EST! While you wait for our recap hit the comments and let us know how excited you are about season 30.

There are eleven contestants left and as we saw last week, everything is falling by the wayside because of inner politics. Originally it was supposed to be Hayley that got voted off but at the last minute Mike changed his mind and told everyone to vote Jenn. So Jenn used her exemption and that caused Kelly go home. And frankly not everyone is happy with that.

So on tonight’s episode alliances are being made and the main topic is what to do with Mike. After all he was supposed to be the leader but according to some he led them down the wrong path. And so he compadres began working behind his back.

And once they start doing that then they’ll soon feel like they no longer need him!

Meanwhile Jenn is laughing up a storm because of what happened last week. It seems she found it all amusing and now she’s just going to keep laughing until it start annoying everyone that tried to send her home. Not a very smart game plan but thankfully she isn’t high up on anyone’s hit list.

She’s not messing up like Mike, she’s not arguing with others like Shirin, and when the challenge finally came around she wasn’t the one holding back her team.

After completing a set of vigorous obstacles that look it could be part of an amusement ride, Joe once again proved to be a winner. And as a reward he got to pick up to four people to take with him as he floated above the jungle and was later treated to a wonderful pizza lunch. So surprisingly he ended up picking Shirin. Now the others such as Carolyn, Will, and Tyler are al explainable choices but Shirin was a bit out there.

And despite the treat, she found something to complain about. Like Carolyn. A woman she does not like and so hated sharing pizza with. Though something else happened during their lunch.

It seems Carolyn was drinking soda when both Tyler and Joe saw something in her bottle. So what do the guys do? They managed to get their hands on the bottle before anyone else notices the object inside. Then they read the clue and went about trying to find out what it led to.

But Mike soon caught them looking around and because Tyler doesn’t want to alienate his team he even told Mike they were in search of a clue.

Mike first planned to follow Joe in order to see where that leads to but after a while he threw in the towel and just basically let everyone know Joe had found an immunity idol. He figured Joe must have found it and yet Joe hasn’t found anything. He was looking and no idol popped up.

So Joe continued to let everyone assume he was safe. That way, in his mind at least, no one would try to oust him. But someone did find that idol and to Joe’s worst luck it was Mike.

With the way things stand, Mike knows people are going to be gunning for him and so that idol is a lifesaver. And for a second he thought he could finally get rid of Joe. Though it seems a higher power is working against him.

Later, at the individual challenge, Joe won immunity for the third time. And that meant elimination was going to be a tougher choice.

Everyone can agree on sending the Joe the Golden Boy home but when he’s safe then who can they target? And in this, Dan turned out to have been right. Earlier, you see, Dan told Shirin she wasn’t safe. He said that by planting herself into Joe’s camp, she left herself open to exposure. And then he implied she would be next.

However that part was also personal because, like many others, he didn’t like Shirin. So he was hoping she was going to be sent home. And by insulting her to her very own face – Dan made an enemy. Not that he knew that part when he was discussing alliances but by the end of episode he was shocked to hear how many tried to vote him off the island.

It appears Shirin nearly held a coup. She attempted to get Dan’s alliances to drop him and she also made the upcoming elimination a battle of the sexes. It was supposed Guys vs Girls. But what saved the day for Dan was the extra votes that went towards Hayley.

Sure, there were plenty of votes with his name in it but a tie simply never came up. There was a clear decision in the making and as it turns out there were some that regretted last week’s decision to choose Jenn over Hayley.

And so Hayley was eliminated on tonight’s episode.

Though Dan is probably going to remember how close the margin was!