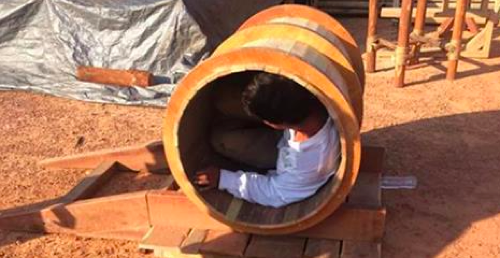 Tonight on CBS their Emmy Award-winning series Survivor Cambodia airs with an all new Wednesday October 21 season 31 episode 5 called, “A Snake in the Grass,” and we have your weekly recap below! Tonight, one castaway embraces a new, more personal style of play, while another player risks ruining a good thing by going against her own alliance.

On the last episode, three castaways left it all on the beach in a gut-wrenching challenge, and two castaways pleaded for their lives in the game at a heated tribal council. Also, Abi-Maria continued to ruffle feathers with her tribe. Did you watch the last episode? If you missed it we have a full and detailed recap, right here for you.

On tonight’s episode as per the CBS synopsis, “one castaway embraces a new, more personal style of play for his second chance. Also, one castaway risks ruining a good thing by going against her own alliance.”

Tonight’s season 31 episode 5 looks like it’s going to be great and you won’t want to miss it, so be sure to tune in for our live coverage of CBS’s Survivor Cambodia episode at 8:00 PM EST! While you wait for our recap hit the comments and let us know how excited you are about season 31.

#Survivor begins at Angkor on night 11 as the tribe comes back from sending Varner home. Woo thanks them for keeping him and they talk about winning challenges. Abi says she decided to keep Woo and says if he writes her name down again, he’s dead to her. Andrew hugs Tasha and they talk about how it was crazy that they pulled that off. Morning comes to Bayon on day 12. Monica, Kimmi and Kelly are on the hunt for seafood. They debate over taking too many of the big clams but Kimmi says she wants to eat.

Monica says they’re depleting too much. She’s trying not to live day to day and is looking ahead. Kimmi is annoyed with her and says she’s wearing her patience thin. Kimmi says they’re not going to deplete the ocean. Kimmi goes back to camp and complains about her. Jeff welcomes them to a #RewardChallenge. Three are tied together and they roll a third in a barrel to get balls they then roll into a target. The reward is comfort with chairs, hammock, pillows, blankets and a tarp.

They will also get refreshments back at camp. The second place tribe gets a tarp and some rope. Third place gets nothing. This challenge was done back in Blood vs Water. Ciera played that challenge and lost. Bayon and Ta Keo have to sit out two. Dietz and Kass sit out and also Fish and Wigglesworth. Kelley getes hers and Monico is going slower and Woo gets his. Bayon is in third place on their bag. They roll the barrel to the next and Bayon is still lagging. Woo and Kelley grab the second bags and move to the last.

Monica is lagging behind again. Jeff says she’s treating is like a Sunday picnic. Woo and Kelley get their third bags and Monica is still much slower. Keith is rolling for Ta Keo. Jeremy is rolling for Bayon. Woo is rolling for Angkor. Keith and Woo tie with one then Jeremy gets one to tie it up. They all tie at two then Keith pulls ahead then Woo ties it. Jeremy misses. Woo gets the fourth and takes the lead then Keith ties it. Jeremy is falling behind and Spencer subs in for him. Spencer sinks two fast then another and ties it up.

They are tied four across the board then Keith gets a fifth. Keith sinks the last one and Ta Keo wins first place. Angkor and Bayon are fighting for second and are tied with four. Woo sinks another and has five. Spencer misses again. Woo tries for the win and lands it giving them the tar reward. Bayon leaves with nothing from the reward challenge. Back at Ta Keo, they find chilled juice to drink. They also have padded chairs and a hammock. They have pillows plus fresh fruit so it’s like a tropical camping trip.

Joe starts talking to the others about a merge plan and they talk about a solid five moving into it. Joe says everyone in his season wanted to vote him out right away. Kelley, Keith, Kass, Joe and one other are in that group and Keith is thrilled. They are happy to throw Dietz under the bus. Over at Bayon, they take the boat out to fish. Spencer goes with Jeremy and he hopes to bond with him. Spencer says he came in last time as a superfan and would watch Ozzy.

Woo is happy to have this second chance and still be there. He tells the others that his mom was on a transplant list for a new heart. He talks about what she went through and how she got a second chance. Abi tells him that her grandma went through the same thing but didn’t have that good luck. Abi thinks Woo is using the story to sway people. She says she feels for him then talks about the tendon transplant in her knee. Abi goes to Tasha and says she thinks he was gunning for sympathy.

Abi asks should she go tell her personal stories. Tasha later says Woo and Abi are like night and day and says it’s a lot of work to deal with Abi while Woo will take marching orders easily. Tasha says in a merge situation, Abi is a time bomb.

Now it’s time for the #ImmunityChallenge. They climb a tower and launch sandbags at a target. Once they hit all the targets they win immunity. They head out to the first mat and Spencer and Joe are first up with Savage close behind. They shoot their Survivor slingshots. Spencer is short and Savage goes long and Joe hits one. They swap and are tied 2-2 with Bayon and Angkor. Ta Keo has just one. Fish hits another team’s target. Abi misses for the win. Angkor wins immunity and now it’s down to second.

Ta Keo has one more to go and Keith is headed up. Spencer is headed up. Keith misses then tries again and nails the last target to win immunity for Ta Keo. Bayon will go to #TribalCouncil tonight. Jeff hands over the immunity idols. It’s Angkor’s first immunity win. Jeff sends them out. He tells Bayon he’ll see them in a bit and says most of them haven’t been to Tribal yet this season. Monica says it will make their team stronger because they can find out where their loyalties lie.

Jeremy wonders if he should trust Spencer or Wigglesworth. Monica, Jeremy and Fish talk about who might have the idol and they talk about voting Wigglesworth out. Spencer knows he’s on the bottom and he’s crashing conversations to commit to voting with the alliance. Kimmi talks to Monica who is looking for an all-girl alliance and wonders if she’s going to ruin their original Bayon alliance. She thinks Monica is a loose cannon flipper.

Kimmi tells Fish that Monica is a snake in the grass. Kimmi tells Jeremy about Monica’s women’s alliance proposal and says they need to flush her out. Jeremy says she’s going to mess them up. She says if they go after Monica, they can tell Spencer to go with them. She says if Monica keeps up, she could go to Kelly and Spencer and go after Fish or Jeremy. Jeremy wonders why Monica is doing this and he’s thinking about sending her home.

Fish says it sends a bad message to Bayon to send out an original Bayon. He says it would be a betrayal that could violate trust with other Bayons at the merge but agrees Monica and Wigglesworth can’t be trusted. At Tribal, they get their fire. Fish says trust is shown at Tribal Council. Monica says people feel that alliances need to stick together but trust and loyalty are an issue. Wigglesworth says she thinks it’s her or Spencer tonight.

Spencer says this is the first time he feels really unified with a tribe and says this is not individual time yet, but tribe time. Wigglesworth says the original Bayon 10 was cohesive and thinks they’ll be good at merge. Monica says she thinks the vote is already locked in. Kimmi says it’s a game and you have to play it. Fish says strategy is based on emotion and you need real bonds to build real alliances. Jeff calls for the vote and Monica goes first.

Jeff says this tribe is definitely playing new school not old school and sends them back to their camp. Monica says she’s shocked and wanted to stay longer but says you don’t know what to expect in this game and says she was officially blindsided.