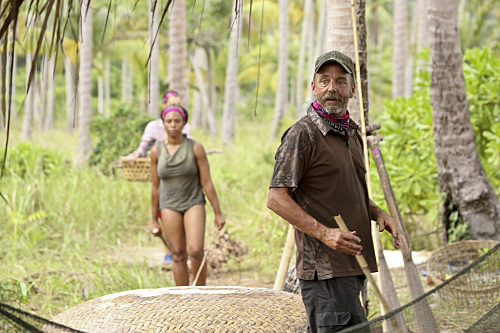 Tonight on CBS their Emmy Award-winning series Survivor Cambodia airs with an all new Wednesday October 28 season 31 episode 6 called, “Bunking With the Devil,” and we have your weekly recap below! Tonight, one castaway is pulled from the game due to a family emergency.

On tonight’s episode as per the CBS synopsis, “one castaway is pulled from the game due to a family emergency; the players drop their buffs for a second time and switch tribes; players chow down on local delicacies to win immunity.”

Tonight’s season 31 episode 6 looks like it’s going to be great and you won’t want to miss it, so be sure to tune in for our live coverage of CBS’s Survivor Cambodia episode at 8:00 PM EST! While you wait for our recap hit the comments and let us know how excited you are about season 31.

#Survivor begins on night 13 at Ta Keo. A boat pulls up to the shore and Jeff Probst climbs ashore. He wakes up Terry and tells him that he got a phone call from his wife and his son Danny is in the hospital and it’s serious enough that he needs to go home. Jeff says he knows it’s a shock and he wouldn’t be here if it wasn’t serious. He goes to grab his bag so he can leave with Jeff. He tells the tribe that his son Danny is in the hospital and he has to go home – he says the doctor told him he needs to come home.

They all hug him goodbye. Kass says she can’t imagine how it must be to get the call that something has happened to your child. She says it’s a reminder how quickly things can change. Keith says they need to win this for Terry. Terry leaves with Jeff. Next up is a #RewardChallenge. Bayon is now down another with Monica voted out and Jeff tells them Ta Keo is down one. The other tribes are shocked. Jeff says Dietz had a family emergency and tells them one of his kids is sick.

Andrew says he would run right to the airport. He says they all love the game but family is bigger than that. The other parents agree that they would all do what Terry did and they are all upset. Ciera is a young mom and she says she talked to her husband about something happening and she says she would go home too. Joe says it took the wind out of their sails a bit but they are going to work hard. Jeff tells them #DropYourBuffs again. They do.

Andrew is excited. They will be back down to two tribes with Angkor being dissolved. They open their buffs and have to reorganize. Woo, Andrew, and Abi are together with Kass, Spencer, and Ciera. Kass says she’s hesitant about being in a tribe with Spencer who refers to her as his arch-nemesis. Kelly Wentworth is with Bayon and is the only original Ta Keo. Fish is in Bayon too and he says there are some alpha guys there with Jeremy, Joe, Tasha and others.

For the reward, one member does a huge slip and slide, grabs a ring then tosses it onto a post. It’s first to get to three. The winner gets a picnic with fried chicken, mac and cheese and brownies delivered to camp. First is Andrew vs Jeremy in round one. They both score but Jeremy got it first so it’s 1-0. Now it’s Kass vs Fish. Fish misses as does Kass. Fish falls short the second time and Kass ties it up 1-1. Next is Abi vs Kimmie. Kimmie’s bounces off and Abi walks off. They yell at her to go back and throw.

Abi lands it and it’s 2-0 Ta Keo. Now it’s Woo vs Joe. They oil up and are ready to slide. Joe lands one and it’s tied 2-2. Now it’s a showdown of Wigglesworth vs Wentworth, Kelly vs Kelley. This is for the win. Both of their rings bounce off then Wigglesworth lands her second throw. Ta Keo gets the picnic and Bayon has nothing. Jeff sends them back to camp empty handed. Andrew is thrilled to have Abi and Woo. He’s confident he’s safe. We’ll see…

Back at Ta Keo, the tribe settles in with their new teammates and sits down for fried chicken. Spencer asks Kass how it was at Ta Keo. She says the four of them were low drama, non-schemers. Spencer is trying hard to get along with Kass. Andrew says they’re out of the hell hole and says it was so hard at Angkor. They all toast with their fried chicken. Andrew says he thinks Spencer has a great heart but knows Kass can’t stand Spencer and is going to leverage this.

Over at Bayon, they are bickering. Keith gets on to Kimmie about the fire and Joe and Kelly talk about the work ahead. He says they need to try and find a way to keep her here. He has a good alliance and has people over at Ta Keo. He wants to keep Kelly for numbers at the merge. He wants Fish and Kimmie to go before her. Joe talks to Tasha and Fish about Kimmie and how she’s not great at challenges. Fish asks why they would break up Bayon strong.

Fish knows Joe is trying to rip apart the core alliance. Fish runs to Jeremy and tells him that Joe wants to go for Kimmie. Fish says he’s happy to go after Joe but Jeremy says he doesn’t want Joe to go first. Jeremy wants to keep Joe around as a shield since he’s a big guy target too. Jeremy encourages Fish to have confidence at challenges. He tells Fish he’s bugging and to calm down. Fish is focused on social strategy and strategic moves. Fish then goes to Tasha and tries to turn her towards targeting Joe.

Fish gets teary and upset in his confessional is the idea that he would miss the second chance. He says he put so much into the game last time and came up short. He says he needs to get his crew to take the shot. He says he kicked himself for not kicking out the golden boy behind. Fish is convinced getting Joe out is the big move of the season.

It’s time for the #ImmunityChallenge. Today it’s a food eating competition. They haven’t one of these in years. It’s local delicacies. They have done the challenge 14 times and Kimmie did it back in season 2 in Australia. It’s Woo and Spencer vs Kimmie and Tasha. They each have two tarantulas and the first pair down wins it. Spencer is done then Woo. Ta Keo gets a point. Next is Keith and Jeremy vs Andrew and Ciera. It’s giant water beetles. Andrew and Jeremy are done. Keith is done and ties it up 1-1.

Ciera is ill. Fish and Wentworth vs Kass and Abi is next. It’s pig snout. Kass holds her nose to shovel it in. Abi gobbles it up. Fish is done first. Abi is done. Now it’s Kass vs Wentworth. Kass spits hers up and Wentworth is done. Bayon takes the lead 2-1. Now it’s individual matches. Joe vs Wigglesworth with deep fried frog. Wigglesworth wins it and ties it back up 2-2. Next is Woo vs Kimmie with a pig’s brain. She won’t even try it. Woo eats it down in five seconds putting Ta Keo in the lead 3-2.

It’s Ciera and Wentworth with a fried scorpion. Ciera could win it and Wentworth could tie it up. Ciera gags. Wentworth is done and ties it up 3-3. Last is Tasha and Kass. They have to eat duck embryo. Tasha shoves it in shell and all. Kass looks like she’s going to vomit and starts gagging. Tasha is chewing and hopping around. She’s done and Bayon wins it and takes immunity. Ta Keo will go to #TribalCouncil. Kass says she hates letting the tribe down and starts crying.

Ta Keo heads back upset that they have to go to Tribal. Woo says they will all vote Spencer unless the plan changes. Andrew tells Woo not to be seen talking to Ciera so Spencer doesn’t get a heads up. Andrew says he thinks Ciera is going to go and Spencer trusts him. He says Kass, Abi and those two now. Andrew says he feels bad about voting Spencer but won’t let anything ruin his second chance. Andrew says this will be a huge blindside.

Ciera tells Kass and Abi she doesn’t think her name should be the one to get written down now that Andrew is tight with Woo. Kass says she thinks they should get rid of Spencer before the merge but Ciera wants Woo gone. Kass talks to Spencer and she says there’s stuff going on that could benefit him. He says he likes Andrew and she says he wanted to target Spencer and suggested telling Spencer to vote for Ciera as part of a blindside. Spencer is stunned.

Kass says she thinks they want to go for a Woo blindside. Spencer says he may have to bunk with the devil and go with Kass. Kass tells Woo that she’s going to get her revenge on Spencer. Kass can right down Spencer’s name or Woo’s and decide who’s going. This is her first tribal of her second chance and she says she doesn’t know if Kalm Kass or Kaos Kass will show up at Tribal. The ones without torches get their fire. Andrew says he’s been working on his personal game and building relationships.

Spencer says he came into the game and seeing the others as people and not just competition. Woo says his first season he failed to see he needed to be more cut throat. Kass says it’s hard to keep track and says she was on Bayon with Andrew and then knows Wu from Cagayan. She says she and Ciera have been together from day one. Andrew says he hasn’t seen Kaos Kass yet, he’s seen loving loyal Kass. Ciera says she’s watching Savage getting close with Woo and that makes her uncertain.

Andrew says he has no doubts about tonight. Ciera says someone’s plan won’t work out. Jeff calls for the vote and Wigglesworth is first. We see Andrew write down Spencer’s name and he says it’s because he’s too good at the game. Spencer writes down Woo and says his fate is in the hands of Kaos Kass. Jeff goes to count the votes. He comes back and calls for immunity idols. None are given. The votes are: Spencer, Woo, Spencer, Spencer, Woo, Woo. They’re tied 3-3. The final vote is Woo.

He got hit with a #Blindside he didn’t see coming. Spencer whispers thank you to Abi and she smiles. Andrew is stunned. Wigglesworth, Andrew and Woo voted for Spencer – the girls and Spencer voted Woo. We see Terry with his son Danny and we find out his son needed a heart transplant and Terry says he got it and his son is doing well now.