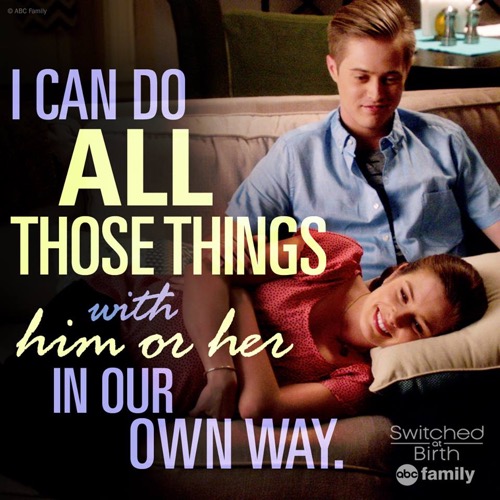 Switched At Birth returns to ABC Family tonight with an all new Monday October 19, season 4 episode 19 called “A Mad Tea Party,” and we have your weekly recap below. On tonight’s episode, Bay (Vanessa Marano) takes over as host for Lily’s (Rachel Shenton) baby shower after Regina (Constance Marie) must tend to an emergency with Will; (Sayeed Shahidi) and sparks fly between Kathryn (Lea Thompson) and Prof. Marillo (Bess Armstrong) at the party.

On the last episode Bay debated whether she’s ready for a relationship with Garrett; Daphne’s communication with Quinn started to affect her relationship with Mingo; and John and Kathryn explored new financial opportunities. Meanwhile, Toby and Lily prepared to become parents. Did you watch last week’s episode? If you missed it, we have a full and detailed recap right here for you.

On tonight’s episode as per the ABC Family synopsis, “Bay takes over as host for Lily’s baby shower after Regina must tend to an emergency with Will; and sparks fly between Kathryn and Prof. Marillo at the party. Meanwhile, Lily worries what others will think of her decision.”

Tune in to ABC Family at 8PM EST to watch “A Mad Tea Party” we’ll also be recapping it all live for you right here. In the meantime head to our comments section and tell us your thoughts on season four so far and enjoy a sneak peek of tonight’s episode below.

Daphne had been given the worst news of her academic career. It seems that now when she’s absolutely sure about wanting to become a doctor; that’s when her dream looks impossible.

Chemistry as it turns out was core class for getting into med school and Daphne was just not cutting it with her test scores. First, she had initially got and “D” and that wasn’t even considered a passing grade. However she later tried to redeem by retaking the class and all that resulted in was a “C”. So her professor didn’t want to lead Daphne on. She knew Daphne couldn’t make into med school if she was continuing to struggle with a single chemistry class and so she told Daphne that medicine wasn’t for everyone.

And frankly that was a tough blow but her professor had felt Daphne should hear straight. Particularly, before the young woman began applying for the many prestigious internships that she was looking at. The professor had known that none of those programs would have go on to admit Daphne.

But there was no escaping from the truth for Daphne. She wanted to ignore what she heard yet ended up running into her professor at Lily’s baby shower. The same baby shower that Regina was supposed to be hosting that somehow fell onto Bay and Kathryn’s shoulders instead.

Kathryn though didn’t mind. She was told that Regina had run into an emergency and so she was happy to take over her grandson’s baby shower. Yet Bay knew the truth. Or at least a version of it. Bay had been there when Will’s mother kidnapped him and then she had been fed a story by Regina and Eric afterwards to explain what she saw.

They had told her that Eric’s ex-wife had lost custody and that’s why she took her son the way she did but the truth is Eric is the one that was actually guilty of kidnapping. And his ex Hope was willing to not to turn him in if he somehow gets her the money she needs to start over with their son. So Regina did have her hands busy – she was trying to figure out how to make her first blackmail payment.

And back at the baby shower, Daphne ran into yet another familiar face. She saw Sheree. Sheree was a friend of hers in high school and after graduation Sheree’s future looked bright. She had gotten a scholarship and she was going to be first in her family to go to college. But something changed. Sheree told Daphne about how it was on campus where she felt like the darkest face there and how that eventually played a part in her grades slipping. So Sheree dropped out.

She didn’t think she could make in college so she gave up without ever putting up a fight.

And Lily finally worked up the courage to announce she was moving to London with Toby. She had been scared before to tell Melody but Melody was a lot easier than Bay. Bay had this idea that she was going to be the fun aunt and to have the rug pulled out from underneath her made her upset.

Though finding out about the baby wasn’t the worst of it. It was being the last to know. That’s how Bay constantly feels in her family and so she’s gotten sick of being sheltered. And that’s why she later cornered Daphne in order for them to discuss the Eric situation.

Daphne had said a few things that hadn’t matched with Regina’s story so Daphne had to be the one to tell her the truth. And Daphne didn’t just stop there. She told Bay everything including how Nacho had come back and attempted to blackmail her. So it’s safe to say that Bay wasn’t in the mood for the baby but she wore a smile more for Lily than herself.

And the highlight of the baby shower proved to be Kathryn going into bad-ass grandma mode. Someone at the party had said that in a few years Down Syndrome would be eradicated and Kathryn said she didn’t see why anyone would want to “fix” a child. For that is how the professor at Lily’s school had phrased it. Then she asked that everyone remember the baby shower was supposed to be a celebration for Lily and her grandson.

The professor soon left after that but, prior to getting into her car, Daphne chose to spoke to the other woman. And she told this professor that almost made her give up her dream of med school that she will become a doctor. It didn’t matter how long it took or that she wasn’t “normal” which was another one of the professor’s words at the baby shower – Daphne said she was going to make it to medical school with or without her professor.

So once she was done with her own obstacles, Daphne told Sheree that maybe she should apply at UMKC. That’s where all their friends are and Sheree’s family would be nearby. Therefore Sheree wouldn’t have to feel so alone and she could have the support she needs to get her degree.

But as for Bay, she had a small breakdown at the baby shower. Regina later found her daughter in her room and she tried to explain why she lied. Yet Bay wasn’t having it. Regina tends to apologize after the fact and tonight was the first time that Bay had had enough. So she told her parents about the fugitive that Regina had allowed to move in next door.