Switched at Birth Premiere Recap, Spoilers: Season 4 Episode 1 “And It Cannot Be Changed” 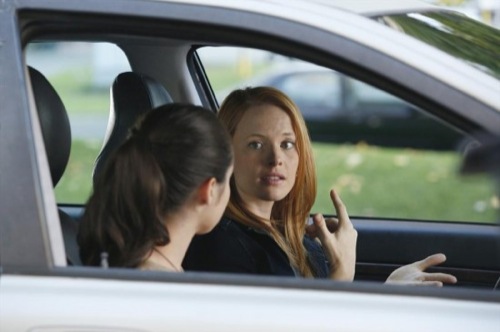 Switched At Birth returns to ABC Family tonight with an all new Tuesday January 6, season 4 premiere called “And It Cannot Be Changed,” and we have your weekly recap and spoilers below. On tonight’s episode, in the fourth-season opener, Bay [Vanessa Marano] faces the fallout of covering for Daphne [Katie Leclerc]. Meanwhile, Daphne begins college and deals with the guilt she feels over Bay’s sacrificial actions; and Regina [Constance Marie] worries about the empty-nest phase of her life.

On the last episode as the Kennish and Vasquez families prepared to celebrate Christmas in their traditional ways, Bay and Daphne found themselves living each other’s lives as if the switch never happened. Did you watch last week’s episode? If you missed it we have a full and detailed recap, right here for you.

On tonight’s episode as per the ABC Family synopsis, “the family and Emmett discover Bay’s impulsive decision to take the blame for Daphne, and no one is happy about it. Meanwhile, Daphne is determined to prove herself worthy of her switchster’s sacrifice while also dealing with the challenges of starting college.”

Tune in to ABC Family at 8PM EST to watch “And It Cannot Be Changed” we’ll also be recapping it all live for you right here. In the meantime head to our comments section and tell us your thoughts on season three so far and enjoy a sneak peek of tonight’s episode below.

Tonight’s episode of Switched At Birth kicks off with Bay explaining to Emmett why she confessed to Daphne’s crime. Emmett is furious that Bay did it without discussing it with him, and now she can’t go to Los Angeles with him. Bay explains that she had to save her sister’s life. Meanwhile, Daphne is breaking the news to John, Regina, and Kathryn. John thinks that Bay was brilliant and brave – but Kathryn says they have to go to the police station and fix it.

Bay heads to the police station the next day to get an ankle bracelet strapped on her ankle, the police officer informs her that she as a 7:00 PM curfew every night and if she doesn’t return home by then the police will be automatically alerted.
Daphne is busy packing for med school, she is beginning to second guess leaving but Regina reminds her that they have been planning for it her entire life. Meanwhile at Bay’s house she and Emmett are learning that it is a little hard to have a makeout session while she is charging her ankle monitor. Bay promises him that in 87 days the ankle monitor is coming off and she will be on her way to LA to see him.

The next morning Bay wakes up and gets ready for her first day of community service. She leaves with Daphne and Regina breaks the news to John and Kathryn that she is moving out of their guest house. She explains that she moved in so she could get to know the girls, but the girls are grown up and leaving – so once Bay moved to Los Angeles, she is going to leave. Kathryn tells her she doesn’t have to leave – but Regina insists that it is time.

Daphne heads to school where they are opening the first college classes for deaf students, and bumps in to Toby – he gives her the cold shoulder and says that he has been busy hanging out with Lily. Toby reveals that he is not happy that Daphne let Bay confess to her crime, Daphne argues that if Bay hadn’t done that, she would be in prison right now. Toby doesn’t understand how Daphne can just go away to school and leave Bay here to clean up her mess.

At community service Bay is picking trash up on the side of the highway, she makes friends with a girl that has a baby and was arrested for a DUI. She reveals that her boyfriend is doing community service too – and they are going to move in together soon. Bay explains that she trashed a construction site with a buddy of her’s, the girl can tell that she is lying and snaps at her that she can’t stand liars.

Daphne heads home and tells Kathryn and John that she has changed her mind and is staying home to go to college classes at the deaf program – they are not happy. They think she is making a huge mistake not going away to pre-med classes in DC. They warn her that Daphne is leaving in a few months and if she is staying for Daphne, then she might as well leave.

At community service, a girl shows up and says that Robbie is her brother and he left his lunch on the counter. She leaves the bag with Bay and she agrees to give it to Robbie. He flirts with her and thanks her for delivering his lunch. The girl she met earlier snaps at her that she is dating Robbie and tells Bay to stay away from him.

Daphne heads to the local college and learns that the pre-med classes that she needs to take have already been filled. She chases down the chemistry 101 teacher and pleads with her to let her in the class. The teacher agrees, and tells Daphne she needs to find a translator who is fluent in sign language and chemistry or else she will fall behind because the classes are very fast paced. Daphne protests that it will be impossible to find one that is available in just a few days, but the teacher reassures her it is not impossible.

After community service, Emmett surprises Bay and takes her to the bridge. When they are getting ready to leave, Emmett’s motorcycle won’t start – they bicker with each other and Bay freaks out because she isn’t going to make it back in time for her curfew. She arrives home late, and Kathryn tells her that her probation officer called and she has to go see them tomorrow since she is late.

The next day Bay heads in to see her probation office, she learns that she wasn’t called in because she was late. She was called in because the guy named Robbie at community service is actually an inmate at the prison and the bag of lunch she handed to him had a bag of heroin in it. Her probation officer says, “Congratulations you just became an accessory to a felony drug deal.” Bay heads home and explains what happened to Regina and reveals that they tacked on an extra 100 days to her probation. So, now she can’t go to Los Angeles with Emmett for 187 days.

Daphne’s new roommate Ivy introduces her to her cousin John and Daphne asks him to be her chemistry interpreter. He snaps on her and says that he despises the teacher and he will not go to her class ever again.

Kathryn stops by Regina’s house and shows her a listing for an apartment that she found for her. They chat about what happened with Wes, and Regina explains that she didn’t think it was the best time to jet off to Hawaii with him. Kathryn convinces Regina to stick around in their guest house until she figures out what she is doing.

Emmett visits Daphne and explains that Bay’s probation got extended, he freaks out on her and says that he is tired of everyone else paying for her mistakes and informs her he will never forgive her before he storms out.

Daphne finds Ivy’s cousin Josh and finally convinced him to be her interpretor – as he walks away she yells that he is awesome. Emmett’s mom corners him and wants to talk to him about going to Los Angeles – she is worried about him being on his own, but she is excited for him to go off and learn everything he can and doesn’t want him to look back on his time away from Bay and regret it. He climbs on his bike and says bye to Bay, and then goes to the airport to board his flight to LA. Daphne tries to talk to Bay after he leaves, but Bay doesn’t want to hear it – she tells Daphne that she “needs her to leave right now.”