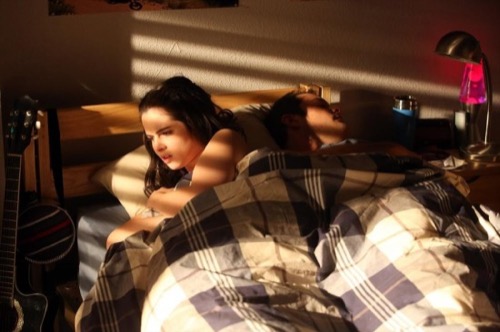 Switched At Birth returns to ABC Family tonight with an all new Tuesday February 3, season 4 episode 5 called “At First Clear Word,” and we have your weekly recap below. On tonight’s episode, Bay [Vanessa Marano] spends a night drinking with Tank, but she can’t remember all of the details the next morning, so she tries to piece together what happened. Elsewhere, Daphne’s invited to a small gathering at her professor’s home; and Lily offers assistance to Toby [Lucas Grabeel].

On the last episode Bay felt pressured to maximize her short time with Emmett when he came for a surprise visit. Daphne was mortified when she did poorly on her midterm exam. Melody and John clashed when John encouraged Travis to try out for the UMKC baseball team. Did you watch last week’s episode? If you missed it, we have a full and detailed recap right here for you.

On tonight’s episode as per the ABC Family synopsis, “after a night of drinking with her friend Tank (guest star Max Adler, “Glee”), Bay wakes to find that she doesn’t remember all the details of the night. She tries to piece together the events of the evening, but as she speaks with different people about the situation, what really happened may not be so clear. Professor Marillo (guest star Bess Armstrong, “My So-Called Life”) invites Daphne to a small gathering of students at her home.”

Tune in to ABC Family at 8PM EST to watch “At First Clear World,” we’ll also be recapping it all live for you right here. In the meantime head to our comments section and tell us your thoughts on season three so far and enjoy a sneak peek of tonight’s episode below.

Bay doesn’t remember much of the night before but waking up next to her ex-boyfriend is something she swears she would never have done if she had been sober. And so on tonight’s episode, “Switched at Birth” discusses the dubious line between consent and nonconsensual sex. Because, at the end of the day, Bay doesn’t know how to describe her situation with Tank.

And though she woke up without her underwear on – Bay was also in denial about what that could mean.

So, eventually, she returned Tank’s phone calls and she sought confirmation from him. She needed to know one way or another what happened and apparently they slept together. Though Tank promised he wouldn’t tell anyone about it what with her dating Emmett.

But that wasn’t Bay’s chief concern. And Tank didn’t understand that when she began to freak out. He thought she was upset that she slept with him when the truth is she’s upset that she could sleep with anyone and not remember it.

And the more alarmed she gets, the more Bay wants to speak someone about it. Originally she was going to go to her mom however Kathryn was busy at the time talking about her new play that Toby was helping her with. So, later, Bay went to Regina.

Daphne had been busy as well. Her professor had invited her and another girl from her study group over and both girls had no idea what that could mean. Were they in trouble or was that just how their professor chose her favorites?

So, while Daphne had the task of creating ice cream from scratch, Bay was at Regina’ new business venture asking her for her opinion about her “friend” that needed help. And Regina had a very distinctive feeling about what happened to this friend.

According to Regina, even if the girl consented that still wouldn’t change what happened. A drunken girl should not have been touched or messed with in any way and what happened to her could only be described as rape.

Bay doesn’t agree with that assessment but she needed help filling in the gaps in her memory so she went to Travis. And Travis told her she had hit her head last night. Then, afterwards Tank took her to a room Travis had told them about in order to watch over her.

Travis said Tank had been watching over her that entire night and that he was such a good guy for doing so. And yet Bay continued to be unsure about what happened. So she went back to the source – she talked to Tank again.

Though Tank’s version doesn’t make that much sense to her either. Tank says she came on to him and that she told him she was going to break up with Emmett. But she doesn’t remember that. What she does remember is pushing him away when he tried to kiss her.

Tank claims the last part never happened but Bay didn’t want to hear it so she let him at his place and went back home. Just as unsure of herself as when she first talked to him.

As for Daphne, she found out the little dinner party her professor had planned was actually an experiment. The professor merely wanted to see if a group of smart women would learn to work together rather than turn on each other. And they disappointed her.

Daphne got in an argument with another young woman and their professor came out with the truth after her experiment had failed to garner good will. So the Daphne and the other girls were told, bluntly, women in the sciences are a small group. They should be working together and not at each other’s throats.

So the experiment taught them all something. They could either be competitive or supportive towards each other but support outweighs the other!

After Daphne had finished up at the professor’s home, she returned to the house and saw that her sister needed her for a change. Bay and Tank had argued so loudly about what happened that night – they alerted Toby to what was going on. And as Toby was trying to talk to Tank – Daphne was trying to talk to Bay.

Toby got nowhere in tank and in fact Tank started to think Toby was on Bay’s side. As if there were sides in this. And so Toby went to his girlfriend for advice. Earlier, the two of them had argued but that was a silly fight and he truly needed her to find out how he should handle this problem with Bay.

As for Bay, she told Daphne she just wanted to forget. Her family on the other hand doesn’t want to dismiss what happened…