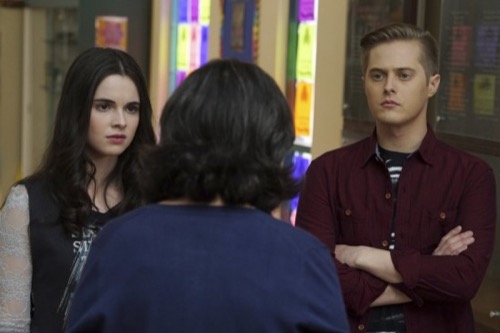 Switched At Birth returns to ABC Family tonight with an all new Monday September 7, season 4 episode 13 called “Between Hope and Fear,” and we have your weekly recap below. On tonight’s episode, Travis (Ryan Lane) visits Emmett (Sean Berdy) in Los Angeles and is displeased with how his friend has changed.

On the last episode Bay enrolled in a class at UMKC and finds herself in the spotlight because of the school’s new harassment policy. Meanwhile, Daphne’s scholarship was in jeopardy; John faced economic troubles; and Daphne had doubts about her relationship with Mingo. Did you watch last week’s episode? If you missed it, we have a full and detailed recap right here for you.

On tonight’s episode as per the ABC Family synopsis, “Travis visits Emmett in Los Angeles and is displeased with how his friend has changed. Meanwhile, Eric wants Regina to move in with him, but Regina wants to learn more about Will’s mother first; and a stressed-out John takes his anger out on Toby.”

Tune in to ABC Family at 8PM EST to watch “Between Hope and Fear” we’ll also be recapping it all live for you right here. In the meantime head to our comments section and tell us your thoughts on season four so far and enjoy a sneak peek of tonight’s episode below.

Tonight’s episode of Switched At Birth begins with Regina and her boyfriend in bed in the middle of the afternoon – they skipped out of work early. He asks Regina to move in with him, and says that he wants them to finally be a real family since everything is out in the open about him kidnapping his son. Regina promises to think about it, and says they have to get back to work and make sure nobody burned down the coffee house.

Kathryn comes home and finds Toby in the kitchen – she begins rambling about the musical and tells him that they found the perfect space. Toby backs out and says that he can’t – he has too much going on. He starts sobbing and comes clean about the pregnancy, Kathryn calls John and Bay in for a family meeting. John begins lecturing him about “being safe.” Toby argues that he is trying to support Lily. John starts screaming at the top of his lungs about how expensive it is to take care of “kids like this” – meaning kids with down syndrome. John snarls that he is not going to swoop in with his wallet and clean up this mess – and then he storms out and slams the door.

Regina pays Daphne a visit at school and tells her about maybe moving in with her boyfriend. She is surprised that Daphne is so supportive – she wants to cook them both a celebratory dinner. Regina reminds her that she hasn’t said “yes.”

Kathryn and John are in his office arguing over Toby and Lily’s baby – he keeps reminding her how expensive it is to take care of a baby with down syndrome. John thinks that they should consider adoption. Kathryn won’t hear it – she doesn’t want strangers raising their grandchild.

Bay visits Daphne at school to discuss the Toby’s baby. Bay mentions that they should get an abortion. Tey wind up in a screaming match, apparently Daphne is “pro life” and she doesn’t believe in abortion. After arguing for a few minutes, Bay announces that it isn’t up to them – it is Toby and Lily’s decision. Meanwhile, Kathryn is venting to Regina. Kathryn can’t believe how stressed out John is lately. Regina thinks that there could be money problems, because he is sensitive about money and Daphne’s tuition.

Travis visits Emmett at school – he can’t wait to hang out with him for the weekend. But, he is surprised when Skye arrives and introduces herself, she says that they are all going to hang out together. Travis obviously isn’t thrilled about her crashing their plans, but Emmett insists it will be great because Skye knows all the good “hangouts” in Los Angeles. The next day they all go out on a hike, while Skye is on the phone – Travis raves about how well Bay has been doing. Skye interrupts and begins squealing – apparently she got them a meeting with one of the hottest agents in Hollywood.

Daphne has dinner with Regina and Eric – he raves about looking at apartments for them. Regina gets upset, she reminds the that she didn’t say she was even moving in with him. Things get awkward and Eric leaves – he says he has to go pick up his son. After Eric leaves, Regina comes clean to Daphne and tells her the truth about Hope Paxton and Eric kidnapping his son. Regina says that she bought a ticket to Atlanta, she is leaving tomorrow. She needs to see if Hope changed, she might not be an addict anymore and she has the right to know that her son is alive. Daphne announces she is going with her.

Bay takes Toby to a school for kids with down syndrome to show him what it will be like if Lily does decide to have the baby. Her plan seems to be backfiring though, Toby is making friends with the kids there. Meanwhile, Kathryn has spoken to the accountant, she knows that they are having money troubles and she confronts John. He comes clean and says that they are liquidating everything and cutting corners trying to fix the tax errors.

Daphne and Regina arrive in Atlanta, they go to an AA group and see Hope there. She takes the podium and says that she has been sober over three years – and then she begins talking about her and Eric’s son. She vows that she will do whatever she has to do to bring her son home. Regina is upset, she feels horrible.

Daphne reminds her that Hope being an addict was only half the problem – she had a violent boyfriend who hurt Eric’s son. They have to make sure that the violent boyfriend is not still in the picture before they tell Hope that they know where her son is. Daphne heads outside and one of the guys from the meting tries to sell her drugs – she realizes that just because Hope goes to AA doesn’t necessarily mean she is sober. After the meeting, Hope comes out and Daphne realizes that the drug dealer is her husband. Hope and her husband shout at Daphne and Regina because they think they are cops and tell them to leave town.

Lily pays Toby a visit – he tells her about his trip to the special needs school and the kids that he met. Lily interrupts and says that child should only be brought in to the world when they are wanted and and be provided for. Toby tells her that it is “easy” to say no to the baby, but there is something inside of him that is making him want to say “yes.” Lily is shocked when she realizes that Toby wants to keep the baby, and she is thrilled that he isn’t going to try to convince her to get an abortion after all. They agree that now they are going to tell their families together. Bay is not happy when she receives a txt message from Toby saying that they are keeping the baby.

Regina heads to the coffee shop to see Eric – she lies and tells him that she was visiting her cousins in Ohio. Then, she announces that she has decided that they should move in together – and she wants to go look at the apartment together.

Toby calls a family meeting and informs John, Kathryn, and Bay that they are keeping the baby. He breaks down in tears and says that he is scared and he can’t do it without them. John apologizes for shouting at him earlier and they all promise that they will be there for him and they are all in it together.