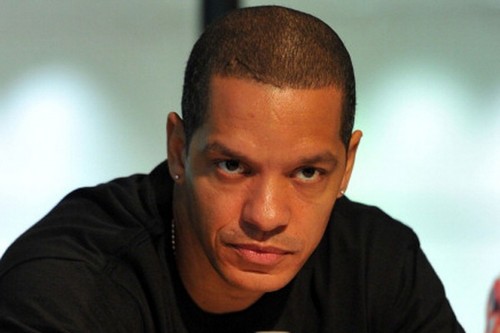 Tara Wallace has responded to critics of her viral pregnancy news, Peter Gunz posted pictures of the LHHNY taping in the ultrasound room and Amina Buddafly is silently furious at both of them for making her look so stupid. Season 3 of Love & Hip Hop: New York is going to be messier than ever before while Tara, Peter and Amina continue their bizarre love triangle on VH1.

After Fameolous outed Wallace about her current pregnancy, the hard-to-like Wallace posted a meme on her Instagram page of a pair of lips with a finger over them as if to hush up her haters. The meme says, “Until your opinion can pay my bills…shhhhhhhhhhh…” There was no caption on the social media photo and Wallace probably figured no caption was necessary.

Of course the homewrecking Love & Hip Hop: New York star probably doesn’t even see what’s wrong with carrying on a relationship with Peter while he is married to Amina Buddafly. After all, Tara had been dating Peter for 12 years when Amina swooped in and stole her man. Peter was so slick through it all that he had married the German-born singer and was still staying with Tara Wallace.

Peter Gunz has notoriously gone back and forth between Amina and Tara for a few years now. Both women know Gunz is double dipping and apparently they can’t seem to quit the We Will Ball rapper. Just before Tara’s pregnancy news was leaked, Amina posted a photo of herself and Gunz on Instagram and admitted that she can’t let him go. It’s clear that she already knew about the controversial pregnancy.

As for Gunz, he has no shame at all. The Love & Hip Hop rapper has been hyping up the upcoming premiere for season 3 of Love & Hip Hop: New York by posting pictures of himself and some of the film crew. A photo captioned, “Another day at the office…” was reportedly taken during the filming of Tara’s ultrasound.

A Fameolous tipster confessed that the reality couple did come to their radiology center with a film crew and even talked about how rude Wallace can be.

Peter didn’t get the nickname New York’s most hated for no reason. The retro rapper is notorious for his player ways and has fathered other children while he was still with Wallace. Peter Gunz probably knew before he even started messing with Amina that Tara Wallace would let him get away with it. And what could Amina Buddafly say when Gunz was caught creeping back to his ex?