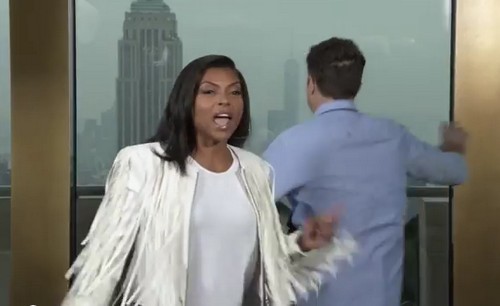 Taraji P. Henson, or “Empire’s” Cookie Lyon, as she is now best known, is hosting “Saturday Night Live” April 11! This actress rose to fame in the 2001 comedy drama film Baby Boy, in which she starred alongside Tyrese Gibson, but now 44-year-old Taraji P. Henson is certainly most known for her role as Cookie Lyon on the FOX hit series “Empire.”

“Empire,” which seems to draw some inspiration from “Hustle and Flow,” an earlier film in which Tarji starred, is with no doubt one of the most watched shows on TV right now. Featuring an A-list cast, and some very talented newcomers, the series goes behind the scenes of the rap music industry and reveals just how dark it can really be.

Now, Taraji. P Henson is getting ready to host “Saturday Night Live” for her first time ever. In the above video, you will see just how excited she is. Taraji, will be only the 10th African American woman to host the show. Following in the footsteps of Cicely Tyson, Oprah Winfrey, Halle Berry, Janet Jackson, Queen Latifah, Rosario Dawson, Maya Rudolph, Gabourey Sidibe, and Kerry Washington, Henson will bring her bold sense of humor to the famed comedy show. With Taraji playing such a serious role in her most recent project, it will be exciting to see her in a much more fun and comical light.

Henson spoke with ET stating that hosting SNL will be a “dream come true.” As far as sketches goes, she didn’t reveal much at all, just saying that she had seen a few of them herself. Looks like we are all in for a surprise, and who doesn’t love surprises? What we do know is that she will be accompanied by musical guest Mumford and Sons.

The Grammy award winning band is gearing up to release their third studio album entitled “Wild Mind,” which is expected to be released on May 4, 2015. They recently began playing at various festivals, and performing at small venues in Los Angeles, Toronto, and more.

If you’re like myself and the countless others that need their Cookie Lyon and “Empire” fix, be sure to tune-in and watch “Saturday Night Live,” this Saturday, April 11.