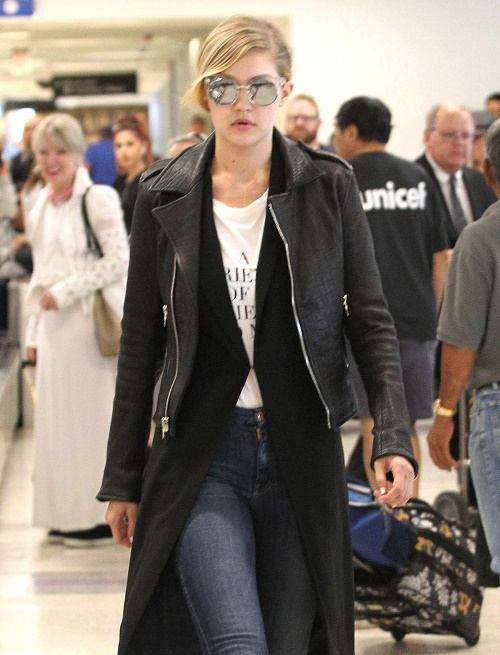 Remember that feud we told you about between Taylor Swift and Gigi Hadid? Well, it’s about to get a whole lot worse. Taylor is reportedly not happy with her frienemy Gigi because she violated “Girl Code” and started dating Taylor’s ex Joe Jonas. Swift has been gabbing to anyone who will listen about Gigi, and going out of her way to exclude her from group activities with their mutual friends. Gigi, isn’t going to stand by and let Taylor bully her though and she fired back at Taylor and started flirting with her current boyfriend Calvin Harris!

Sure, it’s against “Girl Code” to date your friends’ exes. But any girl who actually lives by “Girl Code” also knows that you should never declare war on another girl who is filming a music video with your boyfriend. Taylor may have underestimated Gigi a bit. While Taylor is busy firing shots at Gigi and gossiping about her, Gigi has been on the set of Calvin Harris’s music video prancing around in tiny shorts, giving Calvin a great view of her butt cheeks. Gigi Hadid – 2, Taylor Swift – 0.

Photos hit the internet of Gigi on the set of Calvin’s video, which is being shot at a beach, and she is reportedly the “star.” Gigi was decked out on set in a mesh top, and bikini bottoms that she might as well have left at home – because they covered literally 4% of her butt. Sources on the set of Calvin’s video say that Harris has “definitely noticed Gigi,” and Taylor Swift should be concerned. Perhaps she will think twice again before declaring war on a model who sees her boyfriend more than she does.

Do you think that Calvin would ever cheat on Taylor with her former BFF Gigi Hadid? Would Gigi hook up with Calvin for revenge, or just flirt with him enough to make Taylor squirm? Let us know what you think in the comments below!