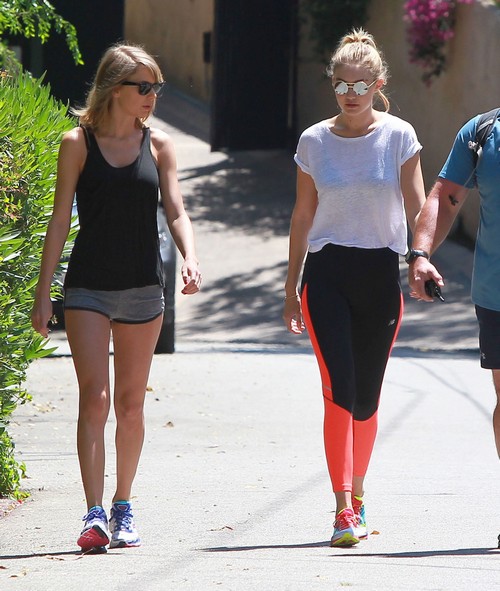 Was Cody Simpson cheating on Gigi Hadid prior to their breakup? Uh oh! Singer Taylor Swift was spotted with her top model buddy Gigi Hadid on Mother’s Day in Los Angeles, California on May 10, 2015. The two besties were spotted hiking together and it looked like the pair was in deep conversation. They also were sure to have a security guard with them to be sure they did not run into trouble.

With this sighting only a day after Gigi Hadid announced that she broke up with Cody Simpson, it is pretty clear that Hadid called in her friend Taylor Swift for a good old fashioned venting session.

We recently reported that Cody Simpson and Gigi Hadid had broken up for the second time after their attempt at rectifying their relationship. Hadid’s rep blamed the two stars’ busy schedules for the break up. They told US Weekly, “They love each other dearly and have split up in hopes that growing on their own paths will bring them together in the future. They remain friends with no hard feelings and each other’s biggest supporters.” Couples who love each other ‘dearly’ don’t break up – tell the BS to someone else.

Cody Simpson recently released his latest single, “New Problems,” which is all about his first break up with Gigi Hadid and that has really made things difficult for Hadid. Cody has also been spotted with A list celebrities such as Kendall Jenner and Miley Cyrus, so perhaps Cody was cheating on Gigi Hadid, hence why Hadid called in Taylor Swift to console her through this difficult time.

With Cody Simpson partying and attending events with all of his female friends, it is not too far fetched to assume that he may have cheated on Hadid, and perhaps the suspicion has finally become too much for Hadid.

Cody better watch out. We are sure it’s only a matter of time before Taylor Swift writes a song about Cody, defending her friend Gigi Hadid. In the mean time, it looks like Taylor and Gigi will be spending a lot of time together watching chick flicks and eating ice cream to get Gigi through this difficult time.

What do you think? Was Cody Simpson cheating on Gigi Hadid? Will Taylor Swift write a song about this situation and call out Cody? Let us know in the comments below.