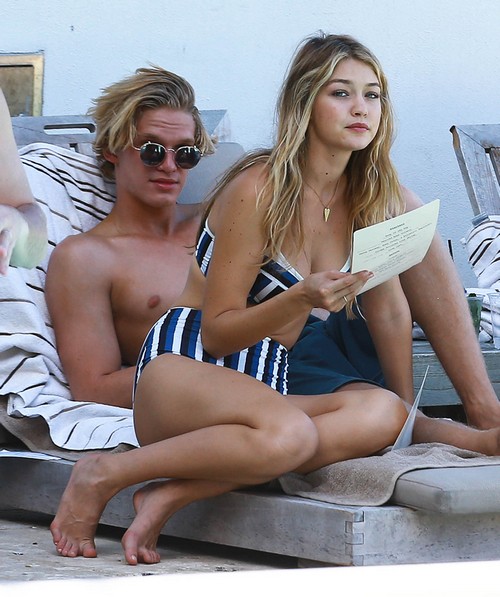 Gigi Hadid, along with boyfriend Cody Simpson, hosted the Victoria’s Secret Pink Spring Break in Miami. Unfortunately for the 19-year-old model, a snapchat user managed to upload a video of Gigi Hadid that made it look suspiciously like she was snorting cocaine.

Oceanup uploaded the video, and it definitely shows Gigi Hadid bending over and putting her face close to the table. The innocent bystander would have to be forgiven for assuming that she was snorting cocaine, because it definitely looks like she’s doing drugs. Of course, one can never really know in these situations because Gigi Hadid quickly took to Twitter to deny the rumors.

She tweeted, “You are the pits of the world. It’s very sad that you need to go to those lengths for someone to maybe read your shit blog.” She then added, “If u actually watch the video there is nothing on the counter .5 sec’s before you see that image.. It’s not only impossible but insane to me. I take pride in being a good role model. Would never touch that, & will not stand for or put up with a little piece of scum blog like OU.”

Gigi could be telling the truth, but we already know that there are many, MANY models that are known for taking drugs – and especially cocaine. It doesn’t even derive from a drug addiction, but rather the fact that many models take stimulants and other drugs to suppress their appetites and provide them with a quick boost of energy. I mean, they barely eat and yet, they have all this energy for partying… it’s not a coincidence.

What do you guys think? Was Gigi Hadid doing drugs in the video, or is she telling the truth? The evidence points against her, but maybe she was just…. licking the table? Let us know your thoughts in the comments below.