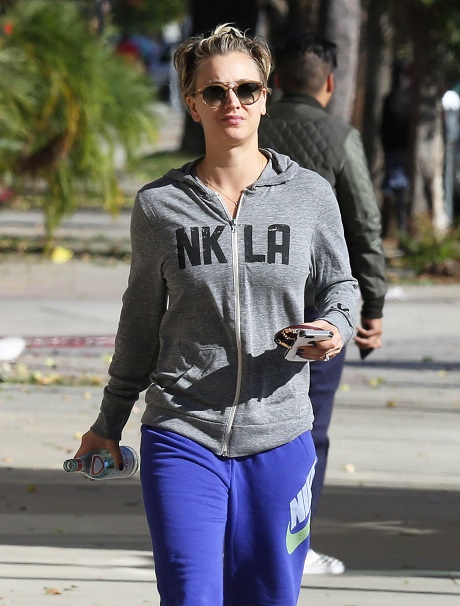 Kaley Cuoco and her husband, Ryan Sweeting, got married less than a year ago, but they’re already having problems in their marriage. According to a new report from Star Magazine, Kaley and Ryan have already taken to sleeping in separate bedrooms, supposedly because Ryan is sick of Kaley’s ‘erratic behavior’.

Star’s source explains that Kaley’s ego has been flaring up since her $1 million an episode pay raise [for The Big Bang Theory], and it’s supposedly getting on Ryan’s nerves. Star’s source adds, “They’ve been fighting a lot because he tells her she’s not a star at home.”

There’s plenty more in the report about how Kaley treats Ryan like a house boy, and how they’re fighting constantly. And this is somehow supposed to come as a surprise to us, even though we were there through the whole Kaley Cuoco/Henry Cavill fiasco that happened just last summer. Ryan Sweeting always seemed like Kaley’s rebound fling, even though her relationship with Henry was clearly a PR-fixed romance. But you know, she couldn’t let her image take a hit like that, considering they broke up after Henry got cold feet following all the PR outings and non-stop press.

So she decided to move on to Ryan Sweeting, trying to prove to the world that, ‘see, she’s in a REAL relationship!’. Except rebounds are supposed to be just that – rebounds. But Kaley Cuoco went and married her rebound, so of course they’re having problems. I don’t think it’s Kaley’s ‘ego’, but Ryan might be feeling insecure with having a wife that’s so much more successful than he is. And you know, there’s the whole dating Superman thing. Just saying.

What do you guys think? Will we be seeing a Kaley Cuoco/Ryan Sweeting divorce in our future? Or is this all just tabloid fluff? Let us know your thoughts in the comments below.