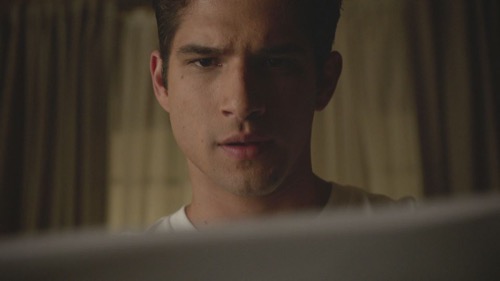 On the last episode, the pack entered Eichen House in order to learn more about the Dread Doctors. Did you watch the last episode? If you missed it, we have a full and detailed recap right here for you.

On tonight’s episode per the MTV synopsis “Scott and his friends follow Dr. Valack’s advice; and experience strange effects as a result.”

Tonight’s episode is going to be really interesting. You’re not going to want to miss even a minute of this exciting season 5 episode 6! We will be live blogging TEEN WOLF on MTV beginning at 10 PM EST. In the meantime, enjoy the sneak peek preview of tonight’s episode below.

Scott and Malia are in the hospital fighting the doctors. Melissa is there, too. They manage to escape and run to the elevator. Scott says, “We never should have read that book.”

There are new holes in the school’s sports field.

In the station, Malia and Stiles and Sheriff S talk about all the new chimeras that have been cropping up. When they bring up the idea that Donovan could be a chimera, Stiles gets unusually quiet. Stiles says they should start focusing on WHY these kids were chosen in the first place for this experiment.

Meanwhile, Lydia and Parrish are training. He’s teaching her how to fight.

Scott and Theo are talking. Theo says that he came to Beacon Hills to find a pack – not watch one falling apart.

Next, the gang assembles to read the Dread Doctors book. Lydia says that the book is bound to cause the memories to resurface because every time she looks at the cover she has a vision. She tells everyone that she thinks she saw them – and that they did something to her – during her surgery.

Everyone starts reading the book.

Malia asks Stiles what he did to his shoulder, and he says the hood of his Jeep fell on him. She listens to his heart beat. It’s steady. He doesn’t tell her that he actually got in a fight – and possibly killed – Donovan.

Kira falls asleep on the couch.

Liam and Hayden are in Sinema. He comes to give her some money to make up for the money he caused her to lose last time he was at the club.

Everyone has fallen asleep reading the Dread Doctors. Except Theo. He’s lurking around like a creep.

Kira is muttering something in her sleep. Theo lurks over her to record her chant – which is in Japanese.

Stiles, Kira, and Scott are at school. The lights flicker.

Lydia notices a girl’s hair falling out in AP Bio. She runs up to the front of the class to give the teacher her “Drop” form. Lydia follows the girl out of the class. The girl says that he hair has been falling out for many years. Lydia asks if she can give her hair a look. Lydia notices several holes in her head and has a vision. Lydia hears a voice that says, “I told you to stay in the car.”

Lydia has found herself in a vision world. She walks through a grated door, which appears to be in Eichen House. It’s a flashback. Lydia’s mom is pouring over Lydia’s grandmother, who has bored a hole into her head with a drill. Lydia’s grandmother says, “They’re coming for us. They’re coming for all of us.” Lydia’s mother is heard yelling, “I told you to stay in the car.”

The lights flicker in the library. Kira says that it wasn’t her.

Scott tries to drop AP Bio. The teacher is visibly upset. She says that he forgot to sign it. As he tries to sign it, he has a vision of a dog being attacked by another dog.

Scott is reliving an asthma attack he had when he was a child – after he had gotten bit by a dog. He’s trapped in his vision world. In reality, his bio teacher is yelling for someone to find an inhaler.

Liam and Hayden are having a “sports off.” Mason and Brett are talking in the bleachers. Mason tells Brett that Hayden got mad at Liam in the sixth grad because he accidentally gave her a black eye.

A student runs out onto the field asking if anyone has an inhaler.

Liam rushes into the classroom where Scott’s hyperventilating and gives him an inhaler. Scott snaps out of it.

Stiles and Lydia show up at the hospital. She says that her memory came back – but it wasn’t about her and the Dread Doctors; it was about her and her grandmother. She has come to believe that, perhaps, the memory she was experiencing of the Dread Doctors was not HER memory. Rather, it was someone else’s – latched onto her because of her banshee!

Theo is working out and in comes Malia. He takes off his shirt beforehand. He tries to impress her by lifting in front of her. Malia asks him why he didn’t tell Scott about the memory she had of the Desert Wolf. He says that he didn’t think she’d want him to.

Theo meets Scott in the locker room. He tells Scott that he recorded Kira talking in her sleep. Theo says that he found a way to translate it and he says it, roughly, translates into “I am the messenger of death.”

Scott says that her fox spirit aura appears to be taking over her, and he says, to be honest, he’s not sure if he can trust her anymore.

The lights flicker some more. Scott hears some stuff, and he says it’s coming from the basement.

Meanwhile, Scott and Lydia have made it into the operating room where Lydia was seen. She asks Stiles to go find someone to turn on the lights. Stiles finds Melissa, who tells him that they’ve been having troubles with the power on that particular floor.

Scott and Theo find some wires that have been severed in the basement.

Lydia begins to hear a monitor beep. She hears a name being spoken by the Dread Doctors over and over again: “Hayden.”

Liam shows up with more money for Hayden. The reason she needs money is because she needs to help her sister pay for the medication she takes for a Kidney transplant she had a few years ago. Liam, curious, cracks a glowstick and holds it up to her eyes. Her eyes glow a strange color.

Meanwhile, Stiles is having a vision. He sees his mother on the hospital roof. She says, “He’s out to get me.” She’s talking about Stiles. His mom attacks him. In the real world, though, he’s being attacked by a sharp-toothed chimera. Theo comes to save him.

Lydia has a vision of the Dread Doctors working on a patient.

One of the Docs attacks Scott in the hospital.

Malia arrives to save him. This was the same scene the episode opened with. This must’ve been a lost memory that they were or have recovered.

Malia runs into the elevator.

Theo destroys the chimera, slashes his throat. Theo says, “Don’t tell anyone about this.” Stiles asks why, why should he keep this secret? Theo says, “Because I never said anything about Donovan.”