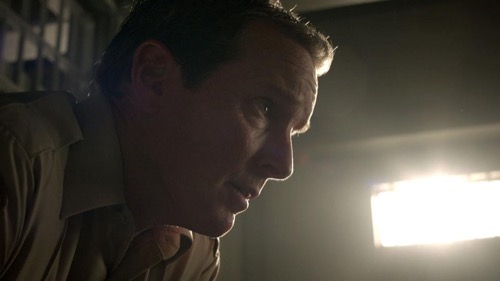 On the last episode, the Season 5 premiere opened on the eve of senior year: Scott and his pack dealt with the arrival of a new enemy and the return of an old friend. Did you watch the special episode? If you missed it, we recapped it all here for you.

On tonight’s episode per the MTV synopsis “Scott tracks a new shapeshifter that’s threatening Stilinski; and Malia receives information about her mother.”

Tonight’s episode is going to be really interesting. You’re not going to want to miss even a minute of this exciting season 5 premiere! We will be live blogging TEEN WOLF on MTV beginning at 10 PM EST. In the meantime, enjoy the sneak peek preview of tonight’s episode below.

Sheriff Stilinski is getting dressed for a date. Scott and Stiles are helping him and they want to know who he’s going out with. He doesn’t tell them.

Donovan is being led out of the precinct with his lawyer, Mr. Stewart. He yells at Sheriff Stilinski and says that he’ll be coming for him when he gets out. And he’ll be coming to kill him.

In the transport van, the driver has a heart attack while transporting Donovan. When they finally get the van stopped, they hear something on the roof. Tracy, the girl who was having night terrors and was later turned into something supernatural, shows up at the side of the van. Even amongst the officers firing shots, Tracy survives. Her father is Donovan’s lawyer.

Donovan escapes the back of the van and makes a run for it. He falls down in an alleyway and the Dread Doctors come for him. They drill into the side of his head and begin the process of turning him into something supernatural. His eyes change color. This doesn’t look good for Sheriff Stilinski.

Stiles and Scott are trying to get the Jeep started. Stiles is clearly frustrated and filled with some anxiety. Scott asks what’s wrong. Stiles reveal that he’s received some new information about the Desert World, Malia’s biological mother, from Braden. The new info isn’t exactly comforting.

Meanwhile, Lydia and Kira are trying to teach Malia how to drive. Lydia tells everyone that she’s taking them to the school but, as it turns out, she’s leading them somewhere else. She leads them to the crime scene where Mr. Stewart has been murdered. Lydia instructs them to notify the police.

Everyone shows up at the scene. Stilinski asks Scott and Stiles if Donovan is a supernatural creature and if he could’ve done something this horrible. Scott says no, that he didn’t appear to be of their supernatural world.

Stiles immediately thinks that Theo had something to do with this.

Scott searches around and discovers Donovan, who continues to mutter, over and over again, the name Tracy. Stiles is crestfallen that the name Theo doesn’t fall from his lips.

Sheriff S says, “Tracy?” That name doesn’t ring a bell to him. But it does to Lydia. “Tracy Stewart,” she says. She’s starting to piece things together.

The next day, they start to figure out what they’re going to do about Tracy. They say first they need to find her. Malia suggests they “put her down.”

Meanwhile, Sheriff S is questioning Donovan. He wants to know what happened, if he saw anything. Donovan isn’t playing by his rules though. He says over and over again how he’d like to have a new lawyer. Parrish says that he know why they couldn’t find Tracy last night: she was busy killing her psychiatrists.

Stiles shows Malia the information he got regarding the Desert Wolf. It’s a photo of countless men brutally murdered. Malia says, “Well, at least we know she’s good at her job.”

Scott, Kira, Theo, and Lydia are in AP Bio. Scott did very well on his first exam. Therefore, the teacher wants him to review last night’s reading. He struggles to find the page and is distracted when Liam approaches the classroom door. Scott points to his ear and encourages Liam to speak – because he’ll be able to hear him. Liam says that Tracy is in the school. She’s in History class.

Tracy looks pretty crazy. She’s in wolf mode. She grabs the edges of her desk and almost breaks it in half.

Scott and Liam go get Tracy in the classroom. She’s seeing the Dread Doctors approaching her; she’s trapped in some kind of nightmare world. She says, “They’re coming. They’re coming for all of us.” She collapses and a pool of mercury-like substance pours from her mouth.

They take her to Dr. Deaton to see what’s wrong.

They wonder if Tracy has any family or, given that she’s a werewolf, if he Alpha is anywhere nearby. Lydia wonders if any new werewolves have moved into Beacon Hills. They realize that they do know of another Alpha in the area – and she might be able to offer up some information. They’re talking, of course, about Satomi.

Liam and Mason, who has recently been brought into the supernatural world, go to the lacrosse field in an effort to question Brett, who’s part of Satomi’s pack.

Kira and Lydia go to investigate Tracy’s room. They’re not sure what they’re looking for, but Lydia’s simply following one of her feelings.

Dr. Deaton continues to look at Tracy. He’s not sure what’s wrong. He tries to cut open her forearm to gather a sample of something, but the scalpel doesn’t create any wound.

Brett says that he’s never seen Tracy before. As Liam and Mason talk with him, Liam notices Tracy’s necklace in her photo.

Lydia and Kira realize that Tracy is probably still stuck in a night terror, thus the reason for her attacking people for no reason.

Deaton notices something moving within Tracy. He turns her over and her back splits open. A tail emerges. She smacks Scott, Stiles, Deaton, and Malia out of the way. They all realize that she’s not a werewolf but actually a kanima.

Kira and Lydia go to investigate Tracy’s room. They’re not sure what they’re looking for, but Lydia’s simply following one of her feelings.

Dr. Deaton continues to look at Tracy. He’s not sure what’s wrong. He tries to cut open her forearm to gather a sample of something, but the scalpel doesn’t create any wound.

Brett says that he’s never seen Tracy before. As Liam and Mason talk with him, Liam notices Tracy’s necklace in her photo.

Lydia and Kira realize that Tracy is probably still stuck in a night terror, thus the reason for her attacking people for no reason.

Deaton notices something moving within Tracy. He turns her over and her back splits open. A tail emerges. She smacks Scott, Stiles, Deaton, and Malia out of the way. They all realize that she’s not a werewolf but actually a kanima.

Tracy managed to get through the circle of mountain ash, a barrier that Deaton says no supernatural creature should be able to cross. Everyone is paralyzed after getting hit by Tracy’s kanima poison. Deaton says Malia and Scott will be able to thwart the poison before Stiles and him. Malia overcomes the poison before Scott an rushes out. She says that she’ll be able to track her easily. Scott tells Malia to “save her.” He doesn’t want her to kill her.

Brett, Mason, and Liam go back to the hole he fell into when he and Stiles were stalking Theo. While in that hole, he saw the necklace that Tracy was wearing in the photo. They determine that this hole isn’t a sinkhole. The dirt is fresh around the edges and there are handprints, leading them to believe that she was buried here and, perhaps, clawed her way out.

Sheriff Stilinski meets his date at the station. It turns out that his date is Lydia’s mother.

The deputies in the police station are paralyzed after having been victimized by kanima poison. Tracy’s there.

Lydia and Kira rush into the station and say that Tracy is after her! Tracy’s climbing on the ceiling, her eyes glowing and her venom dripping onto the floor.

Liam jumps into the hole and searches for the necklace. He can’t find it. He wonders why it’s not there. Brett suggests that she probably came for it. Liam says that he doesn’t think this is the correct hole. Mason asks, “Then who crawled out of this one?”

Donovan is sitting in his jail cell. While everything’s going on in the station, he’s transitioning into something, too.

Lydia’s stabbed in the abdomen by the kanima’s tail.

Malia arrives at the police station. Lydia is badly hurt, but it looks like she’ll make it. She tells Malia that Tracy isn’t aware of what she’s doing, that she’s trapped in a nightmare. “Get her to understand,” Lydia says.

Malia and Tracy begin fighting. Eventually, Tracy turns back to normal, and Malia tells her that she’s not dreaming – that everything is real.

Tracy asks what’s happening to her. The Dread Doctors show up and inject Tracy with something. They kill her.