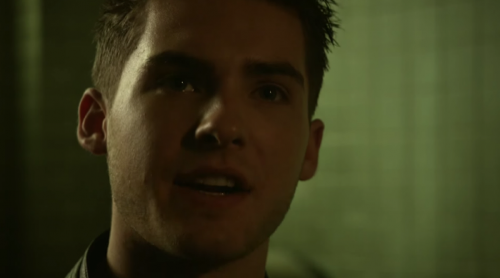 Tonight on MTV, TEEN WOLF airs with an all new Monday August 17 season 5 episode 9 called “Lies of Omission,” we’ve got your recap down below! On tonight’s episode, Scott (Tyler Posey) turns to an unlikely ally for help.

On the last episode, Scott and Malia set out to rescue their captured friends; and Deaton made a horrific discovery about the Dread Doctors. Did you watch the last episode? If you missed it, we have a full and detailed recap right here for you.

On tonight’s episode per the MTV synopsis “Scott turns to an unlikely ally for help; and Stiles and Lydia seek the truth about Parrish.”

Tonight’s episode is going to be really interesting. You’re not going to want to miss even a minute of this exciting season 5 episode 6! We will be live blogging TEEN WOLF on MTV beginning at 10 PM EST. In the meantime, enjoy the sneak peek preview of tonight’s episode below.

Scott stares at his inhaler. His asthma has returned. He says he’s not sure how it has returned, but it has, and it’s as bad as it has ever been. He says that he gets the feeling something bad is coming – everyone has a similar feeling eating away at them. The only problem . . . nobody knows how bad it’s going to be or even what it’ll be. In the voiceover, Scott says that it’s for this reason the gang seems to be isolating themselves from one another. It’s easier to keep secrets this way. It’s easier to cope and process.

Secrets are slowly tearing them apart. Nobody has told Sheriff Stilinski about Parrish – and nobody has told Parrish that he’s stealing the bodies either.

Lydia and Stiles are trying to find the Nematon. Last time they found the spot, three of them had almost drowned in ice water – and they had Deaton’s help.

Scott says that something is coming and he can’t cope with the fact that he’s not sure if he and everyone else will be prepared – and, worse, he can’t even breathe sometimes. He talks with Theo and says that he might want to leave; he came looking for an Alpha and all he ended up getting was him. Theo says he’s not going anywhere. Scott tells him that things are about to get worse, way worse. Theo replies, “I’m counting on it.”

Liam and Hayden are talking outside between two school buses. Hayden tells him that he doesn’t have to check up on her every period. She’ll be fine. Soon, the silver substance starts dripping from her nose. Mercury – supposedly the sign of a “failed experiment.” She says, “Don’t tell anyone. Don’t tell anyone, okay?”

Stiles and Lydia are in the woods. They can’t for the life of him find the tree. Lydia insists that, instead of walking around aimlessly, they simply confront Parrish.

Scott’s in the locker room taking a puff off of his inhaler. Liam is in there, too, and Scott goes over to him. Liam’s packing a big bag. Scott warns him that tomorrow is a super moon and urges him to be careful. Scott thinks that it’s a good idea that they all stick together, but Liam leaves with an attitude and says, “We can’t protect anyone.”

Stiles goes into the library. Theo is by his side. Theo’s not sure if Lydia should locate the bodies – because, if she does, then Donovan will be found. Donovan’s the boy who Stiles killed in the library.

Meanwhile, Sheriff S visits the library with his UV flashlight. He sees remnants of mercury on the floor. He thinks back to his conversation he had with Stiles about Theo – and how Stiles was absolutely positive that Theo was guilty and not being truthful about his motives for entering Beacon Hills.

Cory and Mason have a weightlifting session in the weight room. They’re testing his new powers, which are quite impressive.

In class, Theo says he needs to talk to Scott about something – about Stiles. Uh oh, is he going to reveal Stiles’s murder secret in an effort to turn two BFFs against one another? Their conversation is interrupted. They hear ambulance sirens.

In the front of the school, Cory is being wheeled out on a stretcher. Mercury spills profusely from his mouth and onto his chest. He screams, “Don’t let them kill me.”

Theo and Scott are driving in the car. Scott asks Theo what he wanted to talk to him about. Theo tells Scott to look in the glove compartment. It’s the wrench that Stiles used to bludgeon Donovan with. Theo goes off about how he shouldn’t be telling him this, how he should hear it from him. Theo continues his horror story, and Scott doesn’t believe him. Scott’s in shock. Theo says that he’s never seen anything like it, that he’s never seen anyone that angry.

In class, Lydia’s mom is talking about Anthrax and how it was used as a form of biological warfare in the past. A girl named Beth accidentally bites off her nail and her mouth’s filled with black bile. Malia gets up and goes after her. Beth tells her that she doesn’t know her and that she doesn’t know anything about her condition.

Lydia and Parrish are driving to the Namaton. He seems to be driving their automatically.

Beth runs out of the school after pushing Malia into the lockers. But Beth doesn’t get far before she’s grabbed by one of the Docs. The Doc snaps her neck.

Scott and Theo get to the hospital. Chaos has ensued. They say that this chaos wasn’t caused by the Docs. Scott says, “Corey.” As Scott and Stiles run through the hallway, Corey, who has the ability to blend into his surrounding like a chameleon, returns to his normal state. He doesn’t look great – but he’s still alive. And something’s clearly up.

Malia’s in shock. Stiles meets her in the hallway. She says that she’s not like Scott, she can’t deal with another body – another failure. She runs away.

In the hospital, the Dread Docs seem to show up. Their frequency vibration waves start sounding.

Corey’s almost out of the hospital. He disguises himself against the side of an ambulance – but his efforts don’t work. The Doc draws his sabre and kills Corey.

Stiles phones Lydia. He tells her that if she’s with Parrish that she needs to get out of his way because he needs to go get the bodies.

Lydia, in the woods, tells Parrish to stop thinking. She attacks him in an effort to get him to clear his head. Soon, his eyes glow red. He looks over and there’s the Nematon. Piled at its base . . . the bodies of the failed experiments.

The scene’s recent crime scene has caused an uproar. Sheriff S pulls Theo aside to talk to him about what happened in the library. Theo covers for Stiles and takes the blame for Donovan’s murder.

Meanwhile, Liam and Hayden plan their getaway. They’re at Club Sinema stealing her next paycheck, but they might be too late. The Dread Doctors show up.

One of the Dread Doctors makes its way through the the club looking for Hayden. Liam comes out to protect Hayden – but the Doc starts beating up on him.

Meanwhile, Parrish is freaking out after discovering that he’s behind the cover ups. Lydia has an Aha moment. She realizes that maybe that’s exactly what he’s doing – covering up the murders to protect the secrets of the supernatural. Perhaps that this is what he as a supernatural being – whatever that may be exactly – does. He says that he hasn’t been completely honest with her about his dreams and visions. He says that he’s not just taking the bodies to the Nematon – it’s what’s already at the Namaton that has him worried. He’s adding to hundreds of bodies. They’re piling up. This fills Lydia up with worry.

Meanwhile, at Club Sinema, the werewolves attack the Docs. Scott and Theo show up. One of the Docs grabs Hayden and injects her with something. She doesn’t appear to die. In fact, she appears to be doing better.

The Docs leave. Scott tells them to go to the Animal Clinic. He’ll meet them there.

Theo drives them to the Animal Clinic. Hayden’s not doing well. Liam wonders why she won’t heal. Theo tells him that these Chimeras aren’t like them – more like “cheap knock-offs.” They might not heal like us. Liam says that they should turn her into a werewolf – a legit one. Theo says that that’s a nice idea but that neither of them have the power to do so. Liam says, “Scott can.”

Parrish has locked himself up in a cell. Sheriff Stilinski goes in for him to get him out. Parrish tells Stilinski that he’s the one behind the body snatching and tells him that he can’t be let out. Now now. Sheriff is reluctant, but he agrees.

Scott’s at the Animal Clinic. Stiles shows up. He says he couldn’t get a hold of anyone. But Scott doesn’t care about all of this. He shows Stiles the wrench – the one Theo gave him. Scott asks if it’s true. Stiles says that he didn’t have a choice. He says that some of us can’t be True Alphas and that, some of us, have to make mistakes. Stiles asks how he can fix this – what can he do to help Scott reach a state of forgiveness. Scott doesn’t say much. He just tells him not to worry about Malia and Lydia – and he walks away.

In the Animal Clinic, Liam begs Scott to turn Hayden into a werewolf. He begs him to give her The Bite.