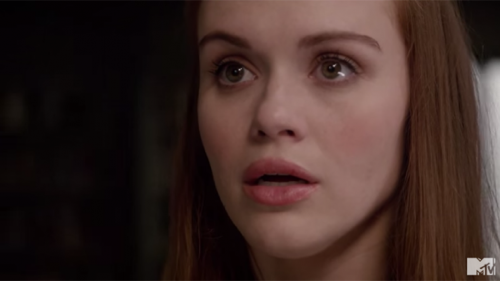 Tonight on MTV, TEEN WOLF airs with an all new Monday August 24 season 5 summer finale called “Status Asthmaticus,” we’ve got your recap down below! On tonight’s episode, in the Season 5 summer finale, Scott (Tyler Posey) and the pack face a threat.

On the last episode, Scott turned to an unlikely ally for help; and Stiles and Lydia seek the truth about Parrish. Did you watch the last episode? If you missed it, we have a full and detailed recap right here for you.

On tonight’s episode per the MTV synopsis “in the Season 5 summer finale, Scott and the pack face what may be their biggest threat yet.”

Tonight’s episode is going to be really interesting. You’re not going to want to miss even a minute of this exciting season 5 episode 10! We will be live blogging TEEN WOLF on MTV beginning at 10 PM EST.

Scott and the gang are in the animal clinic. He says that he won’t give Hayden the bite – and Hayden is going downhill fast

Stiles is driving and his Jeep, like always, breaks down. He pulls over on the side of the road. He has the wrench that he used to kills Donovan with. Angry, he throws it at his Jeep’s window.

Meanwhile, the station gets a call about an animal attack. Clarke is stressed out and, soon, Sheriff S arrives at the school. Clarke says that her car has been totaled. She leads Sheriff S over to the end of the hallway, which has been destroyed by something powerful. There’s a giant moon hanging in the sky.

Lydia is chilling with Parrish in his jail cell. They bond over the fact that they are “harbingers of death,” and wonder about what kind of creature he really is.

Scott has fallen asleep in the clinic’s waiting room. Liam walks out. His eyes are glowing yellow – and he looks at Scott with a deadly stare.

Morning arrives. Stiles’ Jeep gets towed away. Malia comes to pick him up. She asks, “Why did you let it get so bad.” She’s talking, of course, about the Jeep.

Parrish asks Lydia if it helps knowing what she is. She says that it makes her feel less scared about everything. She has an idea about something – something about the myth of the storm (the night of the blackout) – and says she needs to go check something out.

Hayden says that she doesn’t want to die without her sister.

Malia takes Stiles to the police station. She says that she knows about Donovon – and that it doesn’t matter to her.

Parrish is sleeping in his jail cell and has one of his dreams. Stiles is there, ready to turn himself in, but Sheriff S isn’t there. He says that he’ll wait in his office.

Meanwhile, Lydia shows up at the library. She reads about “Odin’s Hunt” and discovers the myth about the Black Dog – known by its common name as a Hellhound. Lydia discovers that this is what Parrish is. After Lydia closes the book, Lydia hears whispers. Theo shows up, and he says, “You know what’s going to happen here? Don’t you?”

She informs him that someone is going to die here, and he tells her that she’s correct. He says that he’s going to let her make the right choice – because he wants her (obviously, he wants her in this dream pack he’s trying to form). Next, he hits her. She falls to the floor.

Malia’s holding her doll baby in a cave, and she has a flashback to the car crash she experienced with her and her family when she was a kid. A black wolf arrive and finds the shape of a man. She asks, “How did you do that?” It’s Theo. He tells her that he knows she’s trying to kill her mother – and that Scott should support her in her mission. Next, he informs her that Hayden’s being taken to the hospital. They’re going to need her help.

At the station, sirens sound. Parrish breaks free. The cops are about to shoot, but Stiles holds them back and follows him out of the precinct.

Liam, Hayden, and Melissa arrive at the hospital.

Scott gets a text from Lydia’s phone saying “Library.” He shows up there only to find her phone on the bookshelf. Theo then proceeds to trap him inside the library within a circle of mountain ash. Scott looks at him dumbfounded. Theo reveals that he was the first successful chimera, thus giving him enhanced abilities. He says that he’s also a werecoyote, the reason why Malia trusted him so easily at first. Theo proceeds to leave, turning on a frequency scrambler to prevent Scott from calling for help. Theo says that what’s coming next will really give him a run for his money. Scott asks what is coming next. Theo responds, “The super moon.”

Mason shows up to help Melissa treat Hayden. He asks why they aren’t getting docs to help them. She says that they won’t be able to help her – so they have to do everything in their power to save her with whatever means possible.

Scott tries to escape the library. He finds a backdoor with a ladder leading to the roof. The mountain ash force field extends all the way to the top. In anger, Scott crushes his inhaler, only to discover that he’s been inhaling wolfsbane all this time – it has been making him weaker. Liam shows up on the roof. He’s furious with Scott and tries to kill Scott for not agreeing to save Hayden.

Meanwhile, Hayden appears to be dying. Melissa tells Mason to run and get Liam if he wants to be by her side.

Malia is currently involved in a struggle with a chimera. She’s having a tough time when a woman shows up to zap him. It’s Braeden.

Stiles continues to follow Parrish. Parrish is driving away with new bodies. Theo shows up. Stiles says that we need to get to Scott immediately, but Theo continues to try to turn everyone against each other. He tells Stiles that Scott won’t want to talk to him.

Braeden talks with Malia and says that she’s not sure what’s going on around here but that it’s about to get a whole lot worse: The Desert Wolf knows that Malia is alive and she’s coming back for her.

Scott continues to fight against Liam. Scott looks up at the super moon and appears to gain more power. He says that he can’t allow Liam to kill him.

Meanwhile, Theo reveals that he never lied about why he came to Beacon Hills: He wants a pack. And this pack doesn’t include Scott. Theo says that he has trapped Stiles’ father – and that he’ll tell him where he is if he agrees not to help Scott. Stiles grows angry. Theo informs him that he came to Hills for Void Stiles, for Lydia (the forseer of death), for Kira (the dark kitsune, and for Liam – ravaged by his anger. He wants this pack.

Scott’s being brutally clawed by Liam when Mason comes into the library. Mason begs Liam to stop, to get a hold of himself, and tells him that Hayden died – she died a few minutes ago.

Liam runs into the hospital to see Hayden one last time. Parrish arrives to collect her.

Theo shows up at the library and digs his claws into Scott. Scott falls to the ground after telling him that his friends will never join him and his endeavors.

Melissa shows up at the library to treat her son. Mason says that he hasn’t had a pulse in over fifteen minutes. Luckily, Melissa manages to restart his heart.

Meanwhile, Lydia is in the Docs’ lair with Theo. Theo digs his claws into Lydia’s spine to collect her memories. He wants to go to the Nematon. He drags her to the tree. Once there, Theo injects the the fallen chimeras with a green substance. They all pop back to life. Theo says that, now, he’s their leader.

Finally, we see the Dread Doctors breaking open a wall. On the inside, we see a painting of two creatures battling – is it an egg? Who knows? The Docs say, “Success.”