The Amazing Race Recap – Alex and Adam Eliminated: Recap Season 27 Episode 2 “Get in There and Think Like a Dog” 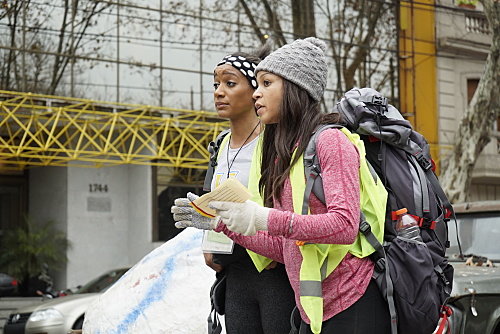 Tonight on CBS the Emmy award winning show The Amazing Race hosted by Phil Keoghan returns in an all new Friday October 2 , season 27 episode 2 called Get in “Get in There and Think Like a Dog.” On tonight’s episode, the race continues in Buenos Aires where the 10 remaining teams learn a tango with a twist and visit the church where Pope Francis was baptized.

On the episode eleven new teams took off on the journey of a lifetime from Venice Beach, Calif. and head for Rio de Janeiro, where teams took a thrilling helicopter ride and face a huge decision at the Fast Forward. Did you watch the last episode? If you missed it, we have a full and detailed recap right here for you.

On tonight’s episode as per the CBS synopsis, “teams travel to the birthplace of Pope Francis, where they visit the church where he was baptized. Also, Racers are driven up a wall when they learn a tango with a twist.”

#AmazingRace begins with the 10 teams in Rio still. They hang out together on the beach and Justin and Diana get to meet the others since they were on the first flight and didn’t get to see most of the other racers. Tanner and Josh are the first to leave Rio and they head to Buenos Aires, Argentina. They have to go to the church where Pope Francis was baptized. Jazmine and Danielle, the track stars leave next.

Cindy and Rick leave in third then Denise and Earl, mom and son team. The teams all have to head to a travel agency. Tanner and Josh find a travel agency and book a flight but are told it’s 8:25 pm. The little cousins borrow a smart phone from someone and find the church and the address ahead of time. Some of the other teams finds the info on a laptop and agree not to share the info with anyone.

Then they end up sharing it anyway and there’s some bickering over it. Josh and Tanner are annoyed with Justin and Diana. The flight heads out with all the teams on the same plane. They land in Argentina and go scrambling. They grab numbers and are told they will be let in at 7:30 am in the order they arrive. Justin and Diana got #1. Next morning, the teams shows up. Justin and Diana head inside.

They are given a clue for a detour. They have to do a cardboard collecting challenging. They have to gather 100 kg of the cardboard to get their next clue. The other challenge is to transport a statue across the city and displayed properly at a park. Justin and Diana go with cardboard and so do the next four teams. Then a few choose the statue and they all head out. There are only 8 cardboard carts available.

The #Detour starts and they get a map on where to find the cardboard at various recycling bins. Another team starts the statue challenge. They load it up and then run to ask for directions to the park. The cheerleaders run with the cart and talk about how they’re athletes. Tanner and Josh deliver their load and it’s about ¼ of what they need. Tanner and Josh are at 40 of 100 kg.

Justin and Diana are at 60 of 100 kg. The cousins grab the last cart. The track stars are out of luck. Tanner and Josh are at 85 of 100. Justin and Diana are first done with 110 kg of cardboard and get their next clue then grab a taxi. Tanner and Josh deliver 115 and get their clue. Ernest and Jin are at 60 of 100 kg and go for more. Logan and Chris get their clue and move into 4th. Cindy and Rick are struggling.

Justin and Diana are at the first #Roadblock. They have to learn a tango then perform it on a wall wearing elevation gear. Diana is learning the dance and is nervous since she’s not a great dancer. Tanner says he can only two step being from Texas and Josh says he can whip and Tanner laughs at him. Josh laughs hard at Tanner who is being dipped by a guy.

Kelsey and Joey make it to the park and look around. Denise and Earl get their clue then Cindy and Rick and they move into 4th and 5th. Kelsey and Joey deliver the statue and move into 6th. The cheerleaders take 7th then the dancers take 8th and the little twins take 9th and the track stars are in last place. Diana fails her dance test then so does Tanner. Logan is doing well then fails as well. Diana tries again.
[11:23:52 PM] Rachel Rowan: She nails it and gets the clue that keeps them in first. The Texas guys are annoyed that they won. Next up is the Polo Stadium that’s the pit stop. The cheerleaders show up and are thrilled it’s a dancing challenge. Tanner fails on his second try. Logan gets it on her second try and they head out in 2nd place. Tanner is on try #3 and fails. He’s so frustrated. Tanner tries and fails again.

Tanner is on try #4 and finally gets it. They head out to the pit stop. Cindy is on try #2 and gets the clue that puts them in fourth place. James gets his on the first try and they head out in 5th place. The track starts show up in last place. Tanner and Josh trash talk Justin and Diana and about how they need to destroy them. Justin and Diana make it to the polo stadium and hear they’re in 1st place.

They win a trip to Morocco. The cheerleaders head out in 6th place from the dance. The reporters are up next with Kelsey trying the dance. She gets their clue and she and Joey head out in 7th. Chris and Logan get out of the wrong entrance at the polo stadium. Josh and Tanner drop their bags and spring to the line to bear the other teams to take 2nd place. Denise and James take 3rd and Chris and Logan are 4th.

Looks like Tanner pulled his hamstring sprinting needlessly. They thought they were up for 1st place so they ran too fast. The little twins are struggling. The dancers try the tango next. His brother says he’s the #TangoMaster and he gets the clue on the first try which puts them into 8th place. Cindy and Rick check in 5th place. The cousins and the track girls are stuck at the dance test.

Alex is on his 2nd try and gets the clue. That leaves them heading out in 9th place. The dancers were still looking for a cab and the cousins are now too. The track stars get their clue and run outside. There are three teams calling for a cab and all are struggling. The cousins finally get a cab and then the dancers and the track stars finally tag a cab too. The cheerleaders check in for an official 6th place.

The guys say they have no regrets and are glad they raced. It’s now down to nine teams as we head into the third leg next week.