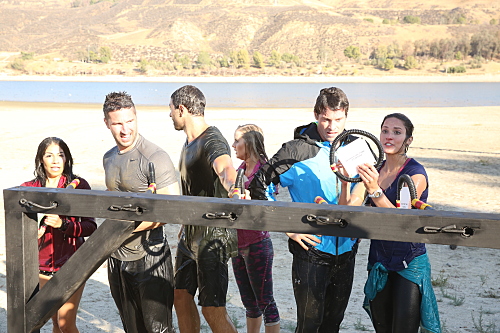 Tonight on CBS the Emmy award winning show The Amazing Race hosted by Phil Keoghan returns with an all new Wednesday February 25 season 26 premiere episode called, “Great Way to Start a Relationship” and we have your weekly recap below. On tonight’s episode, season 26 begins with 11 dating couples, including five pairs who meet for the first time at the starting line at California’s Castaic Lake

On the last episode, in the season 25 finale, for the first time ever, four teams battled it out in the final leg for the million dollar prize, but one team faced a shocking elimination before making it to the finish line. Did you watch the last episode? If you missed it, we have a full and detailed recap right here for you.

On tonight’s episode as per the CBS synopsis, “season 26 begins with 11 dating couples, including five pairs who meet for the first time at the starting line at California’s Castaic Lake, immediately facing a U-Turn before flying to Tokyo on the first leg of the race.”

#AmazingRace starts now. Phil talks about how the race has affected relationships for the better and worse. Tonight they are setting up an extreme #BlindDate situation. There will be 10 singles paired into five pairs to compete against existing couples that were already dying including two guys from New Kids on the Block. There are #TheHairstylists, the #FlightCrew. They introduce the blind date couples to each other.

Phil asks if any of the blind dates have sparks. Laura says Tyler is hot. Jelani says Jenny is hot and they hug. Kurt says he and Bergen have the best hair. Jackie says Jeff is built and they’re going to do well. The existing couples say they know their strengths and weaknesses and the new couples will have to figure it out. Jeff says they are going to race for tickets to Tokyo, Japan.

He says they have to race along the lake shore til they hit a mud run challenge. There are eight tickets on the first flight and three on a later one. He says the winner of this leg will get the Express Pass and says there is a U-Turn on this first leg. They make it to the mud and dive in. The blind date couples seem to be doing fine. #TeamTuskegee were high school sweethearts that have been dating for 10 years.

Harley and Jonathon from #TeamNewKid are hustling along too. One of the last stages is an ice tank. There are two Sochi Olympians competing among the existing people. The first couple to finish is an existing couple then two blind dates. Blair is miserable on their blind date. Three dating couple take 4-6 and a blind couple takes the seventh ticket. Blair makes them miss the earlier flight. A blind date takes the last early ticket.

They all shower off before they leave so they’re not in mud. They now have to head off to Tokyo for their next clue and there’s a blind U-Turn thing too. #TheHairstylists are thrilled. #TeamJJ, a blind date couple chat on the drive. #RXforLove talk about their medical professions. #TeamSoCal also chat on their drive. She’s a psych major and they say they’ll be a kick butt team. #TheLegalTeam chats. She’s Chinese and now a lawyer. He’s a paralegal who wants to be a lawyer.

#TheFlightCrew agree that a blind date on the race is a bad idea. Hayley is totally into Blair who seems less than thrilled with her. She’s kind of annoying. #TeamNewKid come to chat with them. They don’t recognize them and Hayley then realizes they’re NKOTB and says she saw them in concert. Kurt is a pageant consultant from Kentucky who’s never had a BF. Jeff and Jackie get on the first flight which will put them in 45 minutes ahead of the other flight.

#RxForLove, #TeamTuskegee and the #TruckStopLove are on the second flight. In Tokyo, they have to find Kanda Myojin, an ancient shrine. The flight lands and they’re off. #TeamNewKid heads to the train while #TheLegalTeam opts for a taxi. #FlightCrew get on the Narita Express train. #TeamJJ is also in a taxi. There’s a bug in the cab and Jackie screams and tells him to #BeAMan.

The second flight lands and #TeamTuskegee heads to the taxi. He says they have no subways where they’re from and don’t understand them. #RxforLove just misses the train they needed by seconds and this may cause them trouble.

Matt and Ashley decide to do the syn thing too. The next couples also decide to do the steps but #TeamNewKid opts for sake. They get the sake right and she’s thrilled. They drink sake, get their clue and leave. #TheHairstylists and #TeamSoCal shows up to learn to dance. The dancing has odd timing and is very exacting. Most of the others choose the steps.

Blair gets it wrong and Hayley says he should have listened to her. They are in last place and decide to do the syncing steps. #TeamNewKid gets to the sake bar. They get it on the first try. That puts them in second place. They get a cab while #TeamJJ is still waiting on theirs. That makes it a close run for first. Back in the park, the dancers are struggling. #TeamTuskegee is lost.

They stop to ask directions but are struggling. They head to the subway and are completely flummoxed. They spot a sign and hop a train they hope will get them where they are going fast. #RxforLove also shows up to the dance challenge. Blind daters Laura and Tyler get it on one of their first tries to put them in 3rd place. Jelani and Jenny are on their 8th try. They get their clue and move into 4th. #TeamNewKid’s taxi drops them off at a bank instead of the right spot.

Jeff and Jackie get to the U-Turn but don’t put anyone up. The clue tells them to find Phil at a parking space in a certain area. The Olympic athletes clear it on their first try which puts them in first place. #TheLegalTeam makes it to the pit stop and don’t U-Turn anyone and Tyler and Laura are close behind and also don’t U-Turn anyone. #TeamNewKid are wandering lost.

#TeamJJ are told they are at the right place and head into the giant parking lot. #TheLegalTeam rereads their clue and it says “in the vicinity” of the building and they decide that means it’s outside, not inside. #TeamJJ are going level by level then she asks what if vicinity means outside. #TheLegalTeam get out and find Phil. They do their super-slow dance they learned for Phil.

Phil asks how long they’ve been dating and Jelani says one really long day. They are thrilled to hear they are the first team and won the #ExpressPass. #TeamJJ show up and tell Phil they were in the garage but they are happy to be in second place. Laura and Tyler take third place – another blind date couple. Tyler says he’s happy to have her as a partner. #TeamNewKid finally find the U-Turn but beat #SochiLove. They all decide not to U-Turn anyone.

#RxForLove gets their clue which moves them into 7th place. #TheHairstylists are on their 25th attempt and they finally get their clue. That puts them in 8th. Bergen and Kurt hit the U-Turn but don’t block anyone. #SochiLove shows up in fourth place and are the first dating couple to make it there. #TeamNewKid shows up to take fifth. #TruckStopLove is struggling with the dance steps.

Jeff and Lyda flop on their 11th take. #TeamTuskegee gets a pass and head out with their clue in 9th. Mike says Rochelle is getting stressed out and he’s trying to reassure her. They finally get their clue and head out in 10th place. #RxForLove get a taxi when they can’t seem to find wht they’re looking for. #TeamHairstylist is on a train and is very frustrated.

Bergen and Kurt show up and Kurt tells Jeff says if it doesn’t work out for love, they will definitely be friends. #TruckStopLove make it to the U-Turn and decide to U-Turn Jeff and Lyda because they know they’re the only turn behind them. #RxForLove show up and decide not to U-Turn anyone. Lyda tells Jeff to get his head in the game and they finally get their clue.

They head out in last place. #TruckStopLove shows up in 7th place and are thrilled to see Phil. Rochelle says they thought they were 2nd to last and so they felt like they had to use the U-Turn. Jeff and Lyda are stunned to see they were U-Turned and had to go back and do sake now. They decide to U-Turn Jeff and Jackie. #RxForLove stumbles across Phil to take 8th and Matt and Ashley take 9th. Jeff and Lyda show up to the sake place. They got it on their first try.

They hop into a taxi and Lyda says she can’t believe they spent four hours in the park when they could have easily done this. #TeamTuskegee is lost and wandering and refuse to pay for a cab ride because they don’t trust the driver. Libby and CJ are upset and says no one knows where it is. The cab driver follows them and says he knows. They give up and get in the cab.

#TeamTuskegee makes it to the U-Turn and they get to move on. Jeff and Lyda make it there and get their clue to the final stage. It’s the two teams now in a race against possible elimination. Libby and CJ head into the parking deck. Then CJ says the word vicinity may mean something else and they head back to the first floor. Lyda and Jeff make it to the building. Libby and CJ make it to Phil and score 10th place. Lyda and Jeff show up last and Phil says they’re eliminated from the race.