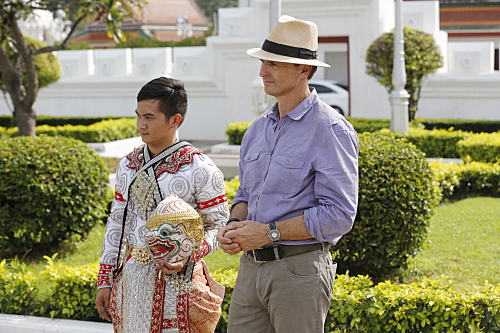 Tonight on CBS the Emmy award winning show The Amazing Race hosted by Phil Keoghan returns for yet another exciting episode and sadly it is the 25th season finale and we have your weekly recap below. In an all new Friday March 13, season 26 episode 4 called, “The Great Amazing Nasty Race” the race continues in Bangkok.

On the episode teams raced through Thailand. Did you watch the last episode? If you missed it, we have a full and detailed recap right here for you.

On tonight’s episode as per the CBS synopsis, “teams face a race within the Race when they attempt to navigate the chaotic streets of Bangkok, and Racers eat a traditional delicacy – a “1,000 year old egg.”

The #AmazingRace starts in Phuket, Thailand. #TheHairstylists got engaged at the last pit stop then enjoyed their #DateNight on the beach. Mike and Rochelle leave first at 3 am and are told to fly up to Bangkok. They have to go to the Buddhist temple of Wat Yannawa. Hayley and Blair leave next. Jelani and Jenny leave last. Laura and Tyler leave in fourth. Aly and Steve are in 5th and Matt and Ashley 6th. Bergen and Kurt leave in 7th. Jeff and Jackie are 8th and the New Kids will leave last.

Mike and Rochelle get on the 6 am flight. Everyone is on it except for the New Kids. At the airport, it’s a scramble for taxis. Harley and Jonathon get the airport at 7 am and hop on a flight. They are a couple of hours behind. First to the temple is Laura and Tyler #TeamSoCal. They grab their clue for the #Detour, water or wheel. There’s a water taxi or a small car type taxi. They have to make two stops. #TeamSoCal chooses water.

Hayley and Blair show up second and he puts her in the driver’s seat but she says she wants him in charge. Matt and Ashley find it first and choose water taxi. The other teams are all there except for #RxForLove because Hayley is leading them the wrong way and Blair is letting it happen. #TeamSoCal gets on the water taxi. #RxForLove finally makes it there in 7th even though they were second to get there. They head to water too.

Matt and Ashley are second to the boats. Bergen and Kurt take the third water taxi. Mike and Rochelle are in fifth. There are only five taxis so Hayley starts nagging Blair to go to the road. She’s turned into a total nagging shrew. They finally get into their taxi while Jelani and Jenny finally make it to the clue box in 8th place. The boats are zooming while the street taxis are stuck in traffic. #TeamSoCal has to first eat a 1,000 year old egg. They crack their eggs open and eat them and both are gagging.

The land taxis are at the snooker club and have to sink a certain number of balls. #TeamSoCal finishes their eggs and gets their next clue. #TheHairstylists get the wrong eggs and don’t like those either. Kurt and Bergen find the right stand. They realize they are at the wrong place. #TeamBlondeDate is munching down their eggs. Matt and Ashley make it to the right stand and start eating. Kurt and Bergen get their clue next.

Jelani and Jenny are in the land taxi. Harley and Jonathon land a couple of hours behind the others. #SochiLove and #TruckStopLove make it to the market and start looking for eggs. Matt and Ashley get their clue and head out. #SochiLove gets their eggs and clue. Mike says the egg is the worst thing he’s ever had but they get their clue. Blair gets the snooker shot and they get a clue to go to a cafe. The second stop for the water taxi people is a traditional Thai prayer.

Laura and Tyler are in first and are sent to another place via taxi. #TeamNewKid hits the clue box and sees the #SpeedBump. They have to make a Thai grasshopper sculpture with river reeds. Matt and Ashley are off their boat too. Kurt and Bergen are at the temple doing their prayer. Harley and Jonathon get to the grasshopper stand and start making what’s essentially a leaf based origami of a grasshopper. Kurt and Bergen take over send and Matt and Ashley move into 3rd.
[2015-03-13, 8:57:33 PM] Rachel Rowan: Aly and Steve are in 4th. #TheLegalTeam are arguing. Jenny is chewing Jelani out for not listening to her. They show up to the snooker club and are struggling. Mike and Rochelle take over 5th place. Next is the Caturday Cafe. Hayley pours their bottle of milk and the cats come running. That gets them into 6th place. #TeamJJ makes it to the cat cafe. That puts them in 7th place.

#TeamNewKid gets done with the grasshoppers and head off to the land taxi. Laura and Tyler make it in first place to the next clue. They have to go to a neighborhood known for used car parts and take apart part of an engine to find a screwdriver that holds their next clue. Harley and Jonathon are in their taxi. Jenny is scared of cats and isn’t happy about the Caturday Cafe. They are now in 8th place. Tyler gets the transmission off.

Harley and Jonathon are at the snooker hall trying to sink the red ball. They get it and head off to the cat cage. #TeamJJ is struggling with the transmission. Mike and Rochelle get to the auto part challenge. Jelani is struggling too. Rochelle got lucky and took the transmission off first. She and Mike head out in 6th place. She kicked the two boys’ butts. Jeff and Jackie gets theirs and head out in 7th. Jenny is freaking out on Jelani.

First to the metal castle is Kurt and Bergen. They freak out to hear they’re in first. Phil says they win a trip to Puerta Vallarta in Mexico. Next to show up is Hayley and Blair then Aly and Steve show up in 3rd. Harley and Jonathon make it to the Caturday and one of them has terrible allergies. They are in last place as of now. They still have to do the transmission challenge. Laura and Tyler make it there in 4th after losing their big lead.

Matt and Ashley make it to the temple in 8th place. Harley and Jonathon show up last. Jonathon tells Harley he got to fulfill his dream of being on the show and is happy to do it with someone he loves. Phil tells them they have been eliminated from the race and they head off hand in hand.