The Amazing Race Recap – Blind Daters Blow Up: Recap Season 26 Episode 5 “Get in That Lederhosen, Baby” 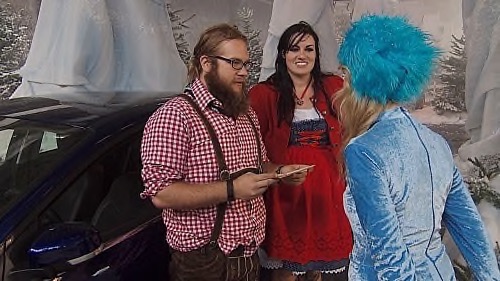 Tonight on CBS the Emmy award winning show The Amazing Race hosted by Phil Keoghan returns for yet another exciting episode and we have your weekly recap below. In an all new Friday April 3, season 26 episode 5 called Get in “That Lederhosen, Baby “ the race continues in Bavaria, Germany, where teams strap on lederhosen for Oktoberfest.

On the episode teams faced a race within the Race when they attempted to navigate the chaotic streets of Bangkok, and Racers eat a traditional delicacy – a “1,000 year old egg. Did you watch the last episode? If you missed it, we have a full and detailed recap right here for you.

On tonight’s episode as per the CBS synopsis, “The race continues in Bavaria, Germany, where teams strap on lederhosen for Oktoberfest. One duo’s race is threatened when they lose a fanny pack.”

#AmazingRace starts with the teams heading for Munich just in time for Oktoberfest. #TeamBlondeDate is the first team to leave. Hayley and Blair leave 2nd and Ali and Steve leave 3rd. All eight teams are on the same 13 hour flight. Laura and Taylor arrive to the clothing shop first to get on their gear. The guys wiggle into Lederhosen and the girls wiggle into lace hose. Laura and Tyler are first to make it to the tower where they have to climb the stairs in the uncomfortable traditional garb.

They make it to the top and spot cars with flags on them. They head down and Laura struggles to drive the stick shift so they swap cars so she won’t have to reverse but leave one of their bags behind. Some of the other teams catch up and others wander lost because they lost their perspective once they got to ground level. #TeamJJ finds Tyler and Laura’s fanny pack. Jackie is furious at Jeff because he called her an idiot and is cutting her off. He calls her f-ing annoying and tells her to shut up.

She says she’s so over him. #TheLegalTeam and #TruckStopLove are two of the last to get into their cards. Hayley rants at Blair and says he’s pissed her off good. #SochiLove arrives first and hear they have to drive backwards through a #WinterWonderland while using the backup camera to get letter clues. It spells out Schliersee. Laura tells Tyler that his fanny pack is gone and they realize it’s in the blue car. He says they can do the challenge then wait for the other car.

Aly and Steve finish first and head to Schliersee, a large lake. #TeamJJ makes up on the drive and he apologizes for telling her to shut up. #TeamBlondeDate decide to leave the car and take a cab and accept the penalty. Did they leave the fanny pack behind? And it looks like they may have parked in a tow away zone. Aly and Steve make it to the lake and have to row to the middle of the lake to get their next clue. They are told they have a detour of Stein or Stack.

They have to carry 22 beer steins at once or they can choose a crate stacking competition where you stack beer crates while the other team member serves as belay. Tyler and Laura wait for their fanny pack to show up. They laugh at Hayley nagging Blair and Tyler says she’s nuts. Matt and Ashley leave in third. Kurt and Bergen hop in a cab. Blair stops to ask Tyler what’s going on and she nags him to drive on. He says he’s just craving conversation from happy people.

Aly and Steve choose the stein challenge. They deliver 11 beers each and get their next clue. #TeamJJ has the fanny pack belonging to Laura and Tyler. Kurt and Bergen show up and tell them they left their fanny pack in their car. Kurt and Bergen are slapped with a two hour penalty for showing up without their car. Aly and Steve head to the Markus Wasmeir Museum and face an act of wooing in their next #RoadBlock where they have to sing a traditional German love song.

Aly goes to learn the song while Hayley and Blair head to the beer hall. #TeamJJ show up and Laura and Tyler grab the fanny pack from their first car. Jackie and Jeff had shoved it under the seat to try and hide it and they’re annoyed they tried that. Jeff and Jackie leave in third place. Aly messes up the song and has cold water dumped on her then she has to go try the song again. Jelani and Jenny get their SchlierSee clue.

#TruckStopLove is meandering and stops by a gas station for snacks and directions. Aly nails the song on her second try and they get the clue to head to the pit stop on Lake Spitzingsee. Laura and Tyler decide to stack the crates. Hayley drops her beers for the second time in a row. Hayley and Blair watch Matt and Ashley land the beers the first time and take 2nd place. Hayley is getting pissy with Blair when he tries to help her find a strategy. She calls him #CaptainObvious.

Hayley insists they go to the other detour. Blair isn’t happy but he has to agree. Aly and Steve arrive first at the pit stop. They each win a new Ford Focus. Matt and Ashley are at the wooing challenge. She screws up and is doused. Matt says she sounds like a dying horse. Jeff and Jackie show up at the crate stacking challenge. Jackie falls right away. Laura and Tyler show up there too followed by Hayley and Blair.

Mike and Rochelle are utterly lost and neither of them can really drive a stick. They are floundering horribly. Ashley gets the song the second time. Blair takes over climbing because Hayley can’t master it. Matt and Ashley race to the pit stop and take second place. The top two are dating couples and Ashley says the singles are falling apart. Mike and Rochelle make it to the winter wonderland finally. Kurt and Bergen are still there riding out their penalty.

Jeff and Jackie are the first to complete their crate stack. They head out in 3rd place. Laura and Tyler head out in 4th after stacking their crates. Jelani stacks their 15 to get them into 4th. Hayley and Blair move into 5th. Kurt and Bergen get their clue but they have no car to drive themselves. Jackie messes up her song and is doused. Jeff says it’s turning into a wet t-shirt contest. Kurt and Bergen buy train tickets to Schiersee. Jenny sings to Jelani and also gets the water shower.

Laura gets soaked and Tyler says that was well deserved and she’s no Beyonce. Jackie does a very nice rendition of the wooing song and earns their clue and 3rd place. Jenny tries again and gets a pass putting them in 4th. Blair sings to Hayley and he gets it on the first try to move them into 5th. Mike and Rochelle are trying to climb the crates and failing spectacularly. Laura finally gets a pass and they take 6th place.

Bergen and Kurt are in last place when they show up to the lake. #TeamJJ checks in at the pit stop in 3rd with Jelani and JJ then Hayley and Blair close behind to fill out the top 5th. Blair says she made him feel as small as a blade of grass all day. Laura and Tyler show up to take 6th at the pit stop. Bergen and Kurt head to stack beer crates. Rochelle is scared of heights and is struggling to make the stacks. She’s at 13 and is crying and scared to put on the last two.

Rochelle thinks about her son and why she’s doing this and manages to get the last two on. That puts them in 7th place. They head to sing and Mike serenades her. He makes it through the first time. Kurt and Bergen are wandering around lost. Mike and Rochelle check in at 7th and are thrilled to hear they’re still in the race. Phil finds the guys in the train station. He tells them all the other teams have checked in and they’ve been eliminated. The guys agree it was a terrible day. Bergen is furious because he thinks Kurt just gave up on the challenge.