The Amazing Race Recap – Finalists Revealed: Recap Season 26 Episode 11 – “In It to Win It (Peru)” 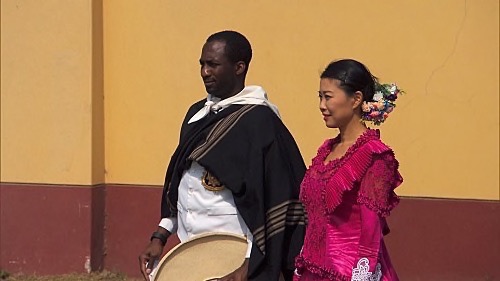 Tonight on CBS the Emmy award winning show The Amazing Race hosted by Phil Keoghan returns in an all new Friday May 8, season 26 episode 10 called Get in “In It to Win It (Peru)” The race continues in Peru.

On the episode the race continued in Trujillo and Otuzco, Peru, where teams used fitness trackers to find their next clue. Also: Blair and Hayley’s communication issues reached a boiling point. Did you watch the last episode? If you missed it, we have a full and detailed recap right here for you.

On tonight’s episode as per the CBS synopsis, “The final four teams race in Peru to earn a spot in the finale.”

#AmazingRace begins in Peru with Laura and Tyler talking about their strategy and he says he needs to be more aggressive. Hayley and Blair leave first and head to a wall in Peru where they have to use magnifying glasses to search a ceramic tile wall. Blair says Hayley has attention to detail and then says she has a great indoor voice (he jokes). He asks if she was a librarian before. Jelani and Jenny leave in second for the 11th leg of the race.

#TeamLegal says they’ll blaze through today’s leg. #RxForLove pull up at the mural. They find a clown and he gives them magnifying glasses. Blair spots the clue sticker right away. They take it to the clown and he hands off their clue. They are told to hit a #Detour of a national dance or help preserve a national treasure. They either learn a romantic dance or make 12 bricks. Hayley and Blair decide to do the brick challenge.

Jenny and Jelani make it to the mural and see that Hayley and Blair are already gone. Mike and Rochelle get into a taxi that’s having car trouble. Tyler and Laura leave in last place and are just a few minutes behind them while the other two teams have more than an hour of lead time. Jelani and Jenny find their square and get their clue from the clown. They head off. Hayley and Blair make it to the Chan Chan site and are showed how to make bricks.

Mike and Rochelle are worried because their cab is making noises and is lurching around a windy road. Their driver seems to have no brakes and is using a hand brake to slow them. Their cab stops to check out the smoke coming out of the engine. Laura and Tyler see they’re broken down as they drive past. Laura says she was praying someone would get a flat. Jelani and Jenny head to the dance challenge. They dress up in native garb and head out to learn the steps.

Laura says she feels bad for them and Tyler says he wishes it was Hayley and Blair because he doesn’t want to lose a million bucks to those two nimrods. Jelani and Jenny are still rehearsing. They decide they’re ready to try to see if they can pass. A new taxi shows up for Mike and Rochelle. Hayley and Blair are being really supportive with each other. They get the thumbs up and then have to deliver 12 bricks up a hill. They try to load 12, it tips then they decide to do six and six in two trips.

Jelani and Jenny dance for the judges. They get applause and then are told they need to try again and need more eye contact and better posture. Laura and Tyler make it to the ceramic wall. They immediately start arguing about their approach. Mike and Rochelle hope that Laura and Tyler will slow up at the wall. Hayley and Blair are struggling in the 94 degree heat to haul the bricks. They deliver then head back down for load number two.

Tyler finds the clue sticker and then Mike and Rochelle show up looking for the clown. They find the wrong clown. Tyler is annoyed that the clown is doing a little presentation and he just wants the clue right away. Hayley and Blair deliver their second load of bricks and get their clue which puts them in first place. They are told to go to Huanchaco. Jelani and Jenny fail on their second dance number. Mike and Rochelle find the right clown and then run to the wall. They find it pretty fast.

Tyler and Laura head to make bricks. They seem to be grasping the concept fast. Hayley and Blair head to the #Roadblock called Don’t Rock the Boat. One of them has to use a rustic boat to get out to a clue box in the water. Mike and Rochelle also show up to the brick making and Laura and Tyler have just three bricks made. Mike and Rochelle start bickering which is pretty unusual for them. Mike and Rochelle decide to leave and go to the other detour. That could be a huge mistake. They struggled horribly at the last dance challenge in Asia.

Mike and Rochelle head out stressed out about losing. Jelani and Jenny are on their third attempt and finally get a pass and their next clue. That puts them in second place. Hayley and Blair carry the boat to the water and Blair says he has a stand up paddle board so he feels good about this. He falls in almost immediately and says it’s totally different. He says it’s like riding a wooden burrito. The locals are laughing at him. Mike and Rochelle get changed into their costumes.

They watch the dance and Rochelle says it looks hard. At the brick challenge, it’s up to 95 degrees. The guy comes over to check their bricks and stomps on four of their bricks. Blair is finally straddling the boat and seems to be doing better in the rough current. He gets to the buoy and grabs a clue. Laura and Tyler get the pass and then load up to deliver the 12 bricks. Tyler loads up all of them and is struggling. Tyler sees how far it is and calls it the road to hell.

Mike and Rochelle are ready to perform. They are told to smile more and to try again. Mike says the problem is their presentation and Rochelle says she can’t fake smile. Blair is rowing back with their clue in his mouth and Hayley is being very supportive and says she’s proud of him. The clue says to head to Virgen del Soccoro which is the pit stop for this leg. Laura drops a brick and they have to go back and try again. Mike and Rochelle flunk again and are sent back to practice more.

Jelani heads out into the water and is wrecked by a wave. Jenny is yelling directions and says he’s getting his butt kicked by the sea. She says the boat is riding him instead of him riding it. Tyler and Laura grab one more brick and go jogging back to the guy. Mike and Rochelle are on attempt number five. Laura and Tyler get their clue and head off to the #Roadblock. Mike and Rochelle flunk and she’s upset and crying worried about being behind.

Rochelle cries and says it’s such a struggle then decides to try again. Jelani lies back on the boat to try and disperse his weight. He can’t go fast but isn’t falling off. He makes it to the watery clue box and heads back. They are in second place headed to the pit stop. Hayley and Blair make it to the pit stop in first place again. They win a trip for two to India. They are also in the finals. Hayley says they started off in the bottom and have fixed their communication problems and Blair says they’re the team to beat.

Laura and Tyler show up to the boat challenge and she has to do it since he’s done the last five. Mike and Rochelle finally get a pass and their clue. They are in last place at the moment. They run off. Jelani and Jenny make it to the pit top in second place. Laura heads out into the water. She’s toppled upside down by a big wave. Mike and Rochelle head to the water and Rochelle has to do this since it’s her turn. They grab the boat and rush out. Laura makes it to the clue box and then paddles back.

They head out in 3rd place then Rochelle and Mike show up. Rochelle heads out into the water while Mike encourages her. Mike says it sucks watching her struggle and he can’t help. She tells him she can’t do it but he says she can. Laura and Tyler head to the pit stop and show up in third place and are told they are in the finals. Rochelle sits on the shore and says she just can’t do it. Then she decides to try again. She keeps going and finally makes it out to the clue box. They head out in last place.

Phil tells them they are the last team to arrive but says they’re not over and says they’ll get to race in the final leg. Rochelle starts crying and Phil says the last leg starts now and hands them a clue. He tells Rochelle to keep it together because they still have a chance. They are told to fly to Dallas and Phil says sometime before the finish line, he’ll eliminate a team. They are stunned that they weren’t booted and still have a chance.