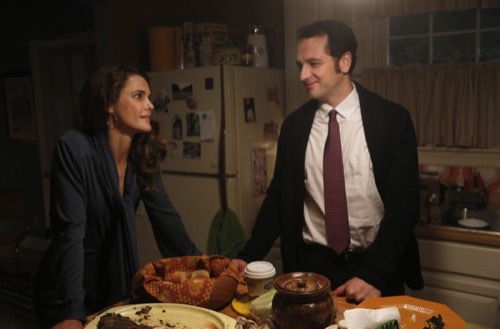 Tonight on FX The Americans airs with another all new Wednesday, February 18 season 3 episode 4 called “Dimebag,” and we have your weekly recap below. On tonight’s episode, Philip [Matthew Rhys] faces a moral dilemma. Later, Paige[Holly Taylor] makes a surprising birthday wish.

On the last episode Elizabeth and Philip came together to deal with a mission gone wrong, but struggled to reconcile their increasingly opposing ideologies. Stan welcomed a Soviet defector, Zinaida, to America. Nina acclimated to her new living arrangements. Written by Joel Fields & Joe Weisberg; directed by Daniel Sackheim. Did you watch last week’s episode? If you missed it we have a full and detailed recap, right here for your enjoyment.

Tonight’s episode looks like it is going to be a great finale episode and you won’t want to miss it, so be sure to tune in for our live coverage of FX’s ‘The Americans” Season 3 Episode 4 at 10 PM EST!

Tonight’s episode of The American begins with Elizabeth sitting under cover at a park and keeping surveillance on Isaac Breland’s daughter, she watches her buy a bag of weed from a drug dealer in the park. She heads home and tells Phillip about the transaction, he feels guilty because she is so young. Elizabeth reasons that the CIA is a hard target. Paige arrives home, and they try to plan a birthday dinner with her. Paige whines she doesn’t want to make a big deal out of it. Elizabeth urges her to at least have some friends over on her birthday, so Paige says she will invite over Pastor Tim and his wife – which obviously wasn’t what they meant.

Nina is sitting in her prison cell and the guards bring her out for a meeting, one of the men in charge fill her in on her new cell mate Evie. They offer her a deal – if she can get Evie to talk about the drop where they caught her picking up a package, they will consider her request for a more lenient sentence.

Elizabeth is upset, she thinks that Paige doesn’t have any friends. Phillip reassures her that Paige is just trying to bug her and get under her skin. Speaking of kids, Phillip rants that his fake wife Martha is pressuring him to get foster kids. Paige doesn’t see the problem, he just needs to tell Martha “no.”

Later that night Phillip follows Isaac Breeland’s daughter Kimberly, her and her friends are denied at the door of a bar because their fake ID’s are no good. Afterwards Phillip introduces himself to them and lies and says his name is Jim. He gives Kimberly his phone number and tells her that he can hook her up with real ID’s from the DMV so that she can get in to clubs. Meanwhile, Liz visits Lisa – the woman that she met at AA. She pretends that she fell off the wagon and she needs help, Lisa lets her in and explains to her husband that she is her sponsor. At home Phillip is quizzing Henry on the state’s capitals – Paige tells him that he got a phone call. The operator says that his “tickets are available for pick-up tomorrow afternoon.”

Stan heads to work the next day, he takes his boss aside and warns him that something “doesn’t feel right” with Zanida, the woman that defected from Russia. Stan is concerned because she is going to be meeting with the president and senators after her press tour. He doesn’t think that she should be receiving access like that. In her jail cell Nina tries to make small talk with Evie, and get some information out of her. Evie doesn’t bite though and says “she is tired” and lays down and refuses to talk to her.

Elizabeth spends the night at Lisa’s house, in the morning Lisa cries to her that her husband Maurice has been out of work for four months and he has started drinking – she had to send he rkids to stay at her sister’s house because things were getting so bad. Meanwhile, Phillip meets up with Kim at the park and gives her the fake ID’s that he promised her. He lies and tells her that he is a lobbyist and they are currently lobbying Congress to lower the legal drinking age.

Stan takes Zanida to a diner and she excuses herself to go to the bathroom, Stan is confused when she comes back to the table for her purse. He is certain that she is up to something. After he takes her home he heads back to the diner and ransacks the women’s bathroom – after checking the tampon holder, toilet paper dispenser, and the tiles in the ceiling he begins hitting the wall because he can’t find anything. Meanwhile in her jail cell Nina is sobbing and working her charms on Evie.

At Phillip and Elizabeth’s house, it is Paige’s birthday dinner – the pastor shows up with his wife, while they are at the table he begins talking about Jesus and being a pacifist. Paige announces to her parents that she wants to get Baptized at the Church and “make herself clean for Jesus Christ.” The Pastor explains that they wanted to check with her parents before they go through with it, Elizabeth and Phillip are speechless.

Stan shows up on Sandra’s doorstep and he asks her to come outside. He chokes up and confesses to her that he had an affair and he cheated on her with a woman through work – and he was in love with her. Stan cries that he “feels like shit about it,” but it is over now and he is very sorry.

After Paige’s birthday dinner is over, Phillip and Elizabeth bicker over her getting Baptized. She thinks that if she tells Paige who they really are – then Paige will drop the Baptism. Phillip argues that Paige isn’t ready to know the truth. Phillip leaves and goes to the park in the dark to smoke weed with Kimberly and listen to music.