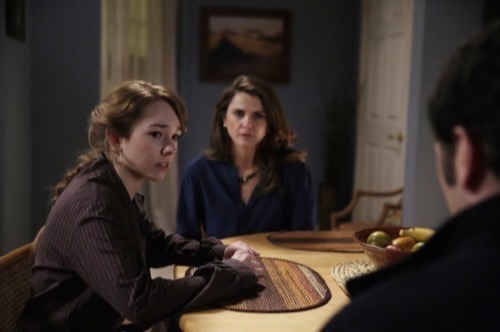 Tonight on FX The Americans airs with another all new Wednesday April 1, season 3 episode 10 called “Stingers,” and we have your weekly recap below. On tonight’s episode, a plan for the CIA’s mujahideen is set in motion by Philip [Matthew Rhys] and Elizabeth. [Keri Russell]

On the last episode Philip and Elizabeth struggled with the gravity of unexpected collateral damage. Stan and Oleg hatched a risky plan to help save Nina. Did you watch last week’s episode? If you missed it, we have a full and detailed recap right here for your enjoyment.

On tonight’s episode per the FX synopsis “a plan for the CIA’s mujahideen is set in motion by Philip and Elizabeth, but tensions are rising in the Jennings’ home.”

Tonight’s episode looks like it is going to be a great episode and you won’t want to miss it, so be sure to tune in for our live coverage of FX’s “The Americans” season 3 Episode 10 at 10 PM EST! While you wait for the recap, check out our sneak peek video of tonight’s episode below!

#TheAmericans starts with Pastor Tim coming to see Philip. He asks if it’s about Paige but Tim says he needs a travel agent. He says they take a mission trip every year and says they’re going to Kenya this year. He says he’s sure Paige will want to go and Tim says they should all come along. Philip says now is not the right time for that. Tim advisees him to treat Paige more like an adult than a child. Philip asks if he has kids and Tim says he has a flock but Philip says it’s not the same.

Tim says it’s not and Philip pulls out some travel brochures. Stan takes Zinaida to the movies to see Tootsie. She says she needs to go to the bathroom. They escort her out. Stan asks if she likes the movie and she says in the Soviet Union the man dressing like the woman would never happen. Stan tells her it wouldn’t happen in the US either. They check the bathroom then let her go in. She sticks something under the counter and then goes into a stall. She flushes and waits.

Henry gets into a bolt hole in his closet and looks through nudie pictures he has stashed there. Paige knocks and he puts it all back in his hiding place. Paige says Henry is coming when Philip says Pastor Tim came to the office. Her dad asks if she’s expecting a commission and tells Elizabeth they’re going a mission to Kenya. She hands the phone off to Philip after answering it. He says Barb didn’t file an agency report and that he has to go. He heads out.

Philip heads to a party to meet Kimmie. She’s drunk and tries to get out of a beanbag chair. He hustles her outside. Nina brings Anton tea and asks if he wants anything else. She asks about what he’s working on and he says she wouldn’t understand. She says he works so hard but he says it doesn’t matter. She asks what he means and he says if they want results, they need to give him what he wants. She asks what and he says photographs. She says that’s hard and takes time.

He asks where she learned English and she says here and in America. Anton is intrigued. Philip takes a drunk Kimmie home and she says he’s the only one who really cares about her. He says that can’t be true but she says it is. She says it’s pathetic and he says she’s real to him and it’s not pathetic. She rolls around drunkenly then says she has to go to the bathroom. She staggers off. He heads downstairs to check on the recording device. He swaps the recorder.

Philip finishes and looks at a family photo of Kimmie and her dad and stepmom. He makes it home and tells Elizabeth that he had to put a drunk Kimmie to bed then says he got the recorder and plays it for Elizabeth. There’s talk about needed the deputy director’s approval talking about the muhajideen. They’re talking about something that will happen if the Army doesn’t screw it up. They also mention Afghanistan. Philip says he’ll go turn it in.

Philip finds Elizabeth working at the travel agency. He closes the office door and says Yusif didn’t answer the signal. She says they need someone else to tell them who they’re going after. Elizabeth says she went by the hotel. Then Paige shows up and they have to drop it. She says she was in the city and thought she’d come say hi. Elizabeth says she should come by more often. She sits and Elizabeth says her LEGO are still in the bottom drawer. Philip asks if she can help they can leave earlier.

Paige asks if they’re trying to turn her into a travel agent. Henry goes to answer the door with a video game in hand. It’s Stan. He says he needs to play Strat-o-Matic and says it’s a football board game. Henry asks if he still has it and if they can play. Stan says he can’t play but will bring it over. He hands Henry a copy of Tron he says they confiscated. Philip and Elizabeth come in and Henry says Stan gave him a sci-fi movie. Elizabeth says he can stay and eat leftovers if he wants.

Philip invites him over for dinner tomorrow since they have a business meal tonight. They sit in the lobby of the hotel drinking. He goes to get a newspaper. Clark watches people in the lobby as Elizabeth watches the desk clerk shift change. She says it’s not a woman. He says they could come back in the morning but she says there’s no time. She says she’s going to go check in. Stan sits in his cluttered house annoyed when there’s a knock at the door. It’s Henry. He bring back the movie.

Elizabeth hears a knock on the door and pulls her top down a little lower. It’s the clerk and she shows him the stain on the bed. He thanks her and says he’ll make sure housekeeping comes up right away and says he’ll comp the room. Elizabeth says she travels a lot and stays at a lot of different places. She says he has a good attitude and then says her company is paying for the room so he doesn’t need to comp it. He offers her a meal and she acts like he was offering a date then says no.

She asks if she can get that next time she’s in town and he agrees. He hands her a card and says it has his direct number on it. She reads his name is Neal and he leaves. Philip goes to see Gabriel. He says the Reziduntara got a message from Yusif who says he’s coming to see him in 24 hours. Gabriel says the centre is getting his son an early release from his assignment in Afghanistan. He says Elizabeth asked him to do it but his son turned it down.

Gabriel says they can force him to go home if he wants. Philip says no. Elizabeth shows up then and says she’s halfway there at the hotel. Philip tells her Yusif is coming. Gabriel says then they’ll know next steps. Elizabeth and Philip come home and find Paige still up. She says she needs to talk to them. They ask what’s wrong. She asks if they love her and says to tell her the truth. She says to look at her and tell her the truth. She says she knows there’s something going on.

Paige goes to her room and shuts the door. Philip picks up the phone and takes it off the hook so Paige can’t make any calls. He asks Elizabeth if she’s okay but she says she doesn’t know. She asks if Phiip hates her and he says no. He says he remembers when she thought them finding out would kill them. She says things change. He says he knows. The phone beeps persistently from being off the hook for so long. Elizabeth comes to check on Paige in the morning. She asks if she slept.

Paige says she wants to stay home today and her mom agrees. She says one of them could stay home with her if she wants. Paige says no. Elizabeth says that’s fine, they understand. Henry tells his dad about Mr Rogers Neighborhood from SNL. Elizabeth tells Philip that Paige is staying home today. He sends Henry out to his bus. Philip and Elizabeth go to talk to Paige with some food. He asks if she’s sure she doesn’t want someone to stay with her today. She says she’s sure.

Elizabeth says to call the office if she needs anything. Paige asks them to speak Russian. Elizabeth does and Philip says she said they love her very much. Paige says she needs to be alone. Elizabeth tells Philip she doesn’t feel good about leaving now but Philip says pressure is counter-productive and will make her angrier. He says they have to go to work and hold their breath. He says Paige won’t do anything stupid. They leave.

Elizabeth and Philip are both distracted at work. Paige stares out her window. She gets the phone and makes a call to Sophie. She asks to talk to Pastor Tim. She tells him she talked to her parents last night and says she told them how she felt and says they didn’t get mad but they were surprised. She doesn’t give him an details and says she’ll see him Sunday. At the DOJ, Stan is interviewed by Taffet. He asks about the break up of his marriage. He says there was no other woman and he wasn’t compromised.

Stan says things just fell apart. Taffet asks if he knows who would have put the bug in the pen. Stan says plenty of people would have the opportunity but he doesn’t know who then he pauses. Taffet asks if he thought of someone but he says no. Stan goes back to the office and asks Aderholt if he’s seen Martha. He says she had a family thing. Paige eats and watches TV when her parents come home.

Oleg talks to Arkady about Nina. Arkady says they need photos of the bomber for the scientists. A woman comes in with a note and Arkady asks Oleg to step out. She says it’s from WILLOW who says she was threatened by one of their people. It’s a note from Zinaida in code that she left. Arkady says the operation was so compartmentalized whoever threatened them didn’t know about it. Stan shows up for dinner and Elizabeth asks how work is. Paige stares at him and he asks if she’s okay.

Philip says she’s been more observant since she got baptized. Paige looks at her parents the spies talking to their FBI neighbor and ponders. Her parents give her a heavy look. She closes up her homework as they sit down to dinner.