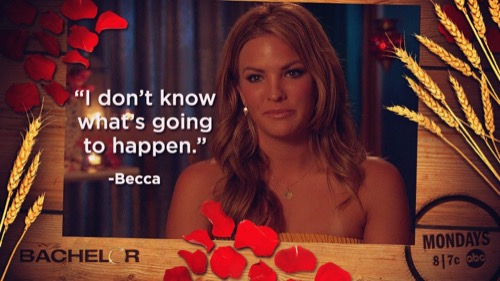 The Bachelor 2105 returns on ABC this evening with an all new Monday February 23, season 19 episode 9 called “Week 9: Bali” and we have your weekly recap below. On tonight’s episode, Chris and the final three ladies travel to the island of Bali in Indonesia where secrets are revealed in the fantasy suite. At the rose ceremony, Chris sends one unsuspecting woman home in tears.  Meanwhile, do you want to know who won The Bachelor?  We already spoiled the ending, right here.

On the last episode, Chris took the remaining six women to Iowa where one lucky lady accompanied Chris to his hometown to watch a high school football game. Later, some of the women took a spontaneous road trip to Chris’ hometown and see how small it really is. Did you watch the last episode? If you missed it, we have a full and detailed recap right here for you.

On tonight’s show as per the ABC synopsis, “Chris and the final three ladies travel to the island of Bali in Indonesia where secrets are revealed in the fantasy suite. At the rose ceremony, Chris sends one unsuspecting woman home in tears.”

Tonight’s episode of The Bachelor kicks off with Chris Soules arriving in Bali, where he will be going on dates with his final three women: Whitney Bischoff, Kaitlyn Bristowe, and Becca Tilley. And, if their dates go well – they will be heading to the Fantasy Suites for overnight dates.

First up is Kaitlyn Bristowe, after Chris Soules greets her – they head to Temple together. Chris warns Kaitlyn that once they go inside they have to respect their traditions and they can’t kiss each other. Inside the Temple, they practice wearing baskets on their heads. Kaitlyn has had a tough time opening up to The Bachelor, but she thinks they are making a lot of progress by sharing a spiritual moment together.

After Temple, Kaitlyn and Chris decide to walk around Bali and explore the local culture. After they stop at a store and make some new friends, then they head to a park that is full of monkeys. While Chris is holding a banana, the monkeys begin attacking him and climbing up him like he is a set of jungle bars. Kaitlyn is scared of the monkeys and how aggressive they are, but she decides to be a good sport and feeds them bananas too. Afterwards, Kaitlyn and Chris find a quiet spot in the park to make-out and talk.

Kaitlyn tells Chris Soules that she loved their hometown date together – and her family was blown away by Chris and could tell that their feelings for each other are real. Her Dad was a little concerned that if Chris doesn’t choose Kaitlyn, she is going to be devastated because he could tell that Kaitlyn is falling in love with him.

Later that night Kaitlyn and Chris sit down together for a romantic dinner, Chris kisses her and notices that she is shaking and wants to know why she is so nervous. Kaitlyn explains that she feels vulnerable because of her past relationship, Chris reassures her and tells her that the only way they can know if their relationship will last is if they don’t hold back with each other. Chris gives Kaitlyn an envelope with the key to the Fantasy Suite, Kaitlyn accepts the invitation to spend the night with Chris without any hesitation and they head to their hotel room together.

The next day Chris meets up with Whitney Bischoff for their date in Bali, Chris meets her at a dock and they board a boat where he has a picnic waiting for her. They sit down to eat and Chris pours them some champagne, Whitney gushes about how much she has missed him while they sail off in to the Indian Ocean. They both rave about how beautiful Bali is, and Chris admits that it is a perfect place to fall in love with someone.

Whitney is still nervous about what happened at her hometown date, her sister Kimberly refused to give Chris Soules permission to propose to Whitney. Whitney explains to Chris that her sister Kimberly has been taking care of her their whole life because their mom passed away – her sister has always protected her, and that is why she was skeptical about giving Chris her blessing. Chris reassures Whitney that he respected her sister Kimberly’s decision, but from his perspective it doesn’t change their connection or the feelings that he has for her.

After the end of their dinner Chris Soules presents Whitney with a key to the Fantasy Suite, Whitney says she has thought about this moment a long time – and she absolutely wants to spend the night with him. Chris and Whitney head to the suite to check it out and they have their own private pool and a romantic bath drawn for them with candles. They pour champagne and close the blinds.

The next morning Chris Soules meets up with Becca Tilley, she is nervous about their date in Bali because she still hasn’t told Chris that she is a virgin and has decided to wait for marriage before she has sex. Chris invites Becca to go on a walk with him, and they check out the countryside of Bali. Chris is amazed to see how they farm their crops in Bali compared to back home in Iowa. Becca gushes that the landscape is “magical,” and they hang out with some kids in the local village.

Becca and Chris arrive at a Temple and they sit down with some of the elders – they learn that one of the guys is a medium and he can see the future. Chris asks the medium if they are meant to be together, the medium informs them that they are perfect for each other and they will both be amazing parents. Becca asks for advice for the Fantasy Suite and the medium tells them to “make love.” Becca laughs about how excited Chris is about it – because them “making love” isn’t going to happen.

Afterwards Chris and Becca sit down for a romantic dinner together, Chris raves about how perfect their day was in Bali and he confesses that he could see himself raising a family though. Chris is concerned though because he knows that Becca has never been in love before. Becca explains that she wants to find a husband but she wants to make sure that he is the “right person,” Chris asks Becca if she can actually see herself having a life in Arlington. Becca says that she wouldn’t make a move to Arlington unless she is sure that Chris is the right man for her, and she admits that she is falling in love with him. Chris confesses that he is falling in love with her as well, and he thinks that she is incredible.

Chris invites Becca to spend the night with him in the Fantasy Suite, Becca accepts his invitation and they head to the Fantasy Suite. They sit down with champagne, and Becca decides that it is time to come clean with him. Becca explains to Chris that she has never had sex before and she is a virgin, she has decided to wait until she is married. Chris is speechless at first and obviously shocked – he finally manages to say that he respects that, and it says a lot about who she is as a person.

The next morning Chris Soules wakes up with a heavy heart, he has a major decision to make. He is going to have to send home either Whitney Bischoff, Kaitlyn Bristowe, or Becca Tilley. He is petrified that he is going to make a mistake and send the wrong girl home – and he is dreading hurting one of girls’ feelings. He has some major anxiety over the rose ceremony because he is falling in love with all three on the women. Chris Harrison pays Chris Soules a visit – and The Bachelor confesses that he has no idea who he is going to send home yet. Chris admits he has some reservations about BEcca because she isn’t ready to move to Iowa yet and her feelings aren’t as progressed as Kaitlyn’s or Whitney’s.

It’s time for the rose ceremony, Chris Soules arrives and Whitney, Kaitlyn, and Becca Tilley are waiting for him. Kaitlyn is nervous, but Whitney is certain that Chris doesn’t have as deep a connection with the other two girls as he does with her. Becca is scared – she is afraid that Chris is sending her home because she admitted she wasn’t sure if she was ready to move to Iowa.

Chris Soules asks Becca if he can speak to her in private for a moment, and he leads her away from the rose ceremony. Whitney is certain that Chris is sending Becca home, and he just didn’t want to put her through the embarrassment of eliminating in front of the other two girls. Becca rambles that she hasn’t slept since she seen him last and she doesn’t feel good about the last conversation they had in the Fantasy Suite. Chris reassures her that he can see a future with her, Becca explains that she is crazy about Chris and she would be devastated if he sent her home, she says that she is willing to move to Arlington for him if he proposes to her – and she hasn’t taken that option off from the table.

Back at the rose ceremony Whitney and Kaitlyn are giddy with excitement because they think that Chris is sending Becca home, Kaitlyn is sure that she in the final two now. But, then Becca and Chris Soules return, and the other two women are shocked to see that Chris didn’t send her home. Becca takes her spot in between Kaitlyn and Whitney. Chris Soules prepares to hand out the final two roses, he calls up Whitney and Becca.

So, Kaitlyn Bristowe is officially eliminated from The Bachelor. Chris’s final two are: Whitney and Becca.