The Bachelorette 2015 Kaitlyn Bristowe Recap – Who Was Eliminated: Season 11 Episode 6 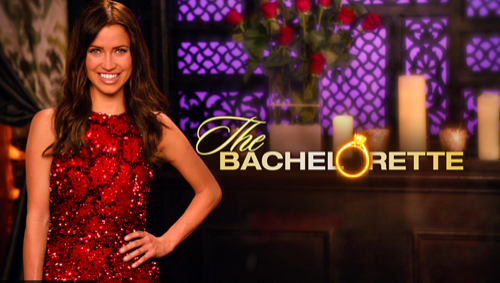 The Bachelorette Kaitlyn Bristowe airs tonight on ABC with an all new June 22 season 11 episode 6 We’ve got your recap down below! On tonight’s episode a rose ceremony at the Alamo is followed by a trip to Dublin, Ireland, where six suitors attend a fake Irish wake for Kaitlyn and must  her. Later, Kaitlyn and one lucky guy attend a romantic, private concert by the Cranberries.

On the last episode, Nick had to endured a no-holds-barred interrogation by the other guys vying for Kaitlyn’s attention before they allowed him to join the group. Kaitlyn’s worst nightmare came true at the cocktail party at New York Mets’ Citi Field. Did she made a mistake letting Nick stay? Three men departed at a difficult rose ceremony, leaving 12 men to travel to San Antonio. A Texas two-step competition got wild for Kaitlyn and one lucky guy who needed to strut their stuff in front of a rowdy crowd. Ten bachelors were surprised by a charming 13-year-old superstar Mariachi singer and his band. They were needed to write and perform their own songs and serenade Kaitlyn. A special one-on-one date takes the Bachelorette and her date kayaking along the famed River Walk, but the night portion of their romantic tryst turned very emotional. Finally, another explosive showdown is in store, as one frustrated bachelor opened up about the free-spirited Kaitlyn to her face. Did you watch the last episode? If you missed it, we have a full and detailed recap right here for you.

On tonight’s episode per say the ABC synopsis “Some bachelors will be making their last stand at the Alamo, as the drama picks up in San Antonio where it left off – Ian is about to give Kaitlyn a piece of his mind – in one of the most shocking confrontations of this or any season. After a rose ceremony that leaves nine men in the chase for Kaitlyn’s heart, the remaining bachelors travel to the lush beauty of Dublin, Ireland. A picture perfect day strolling through the streets of Dublin turns into a passionate night for the Bachelorette and one of the men, but will Kaitlyn’s actions have serious consequences when it comes to the other men? A six-man group date tests the bachelors’ ability to say “good-bye” to Kaitlyn – at a fake, traditional Irish wake. The rose winner from the group date and Kaitlyn enjoy a private concert by the internationally famous Irish rock band The Cranberries. Simultaneously, one of the men has a major meltdown and reveals an explosive secret only he and Kaitlyn shared, leading to a face-off that could derail the Bachelorette’s search for love.”

Tonight’s episode of The Bachelorette picks up where we left off last week. Ian sits down with Kaitlyn Bristowe during the cocktail party. He lets Kaitlyn know that he has had enough of the show. He thinks that she is “shallow” and she joined The Bachelorette just to “make out with a bunch of guys.” Kaitlyn is obviously not happy with Ian. She tells him that she is “super offended.” She snaps that she like humor, but that doesn’t make her shallow or surface level. Kaitlyn rants that she is disappointed with Ian and tells him that he can leave. Ian scoffs that he had already planned on leaving because it is obvious that she is not the person he is looking for.

Ian stands up and leaves the hotel – leaving Kaitlyn sitting there dumbfounded. The other guys watch as Ian marches out of the hotel and hops in a car and leaves, he didn’t even say goodbye to anyone. In the car, Ian laughs to the camera guy about how happy he is to be off the show. He scoffs that he is “being punished for being too intellectual.” He thinks that Kaitlyn made a horrible Bachelorette, and Ian says that he is “destined to be the next Bachelor.”

After Ian walks out on her, Kaitlyn is obviously upset. Nick Viall uses the opportunity to get some more alone time with Kaitlyn and comforts her. Afterwards they have a hot makeout session on the couch – Marcus walks in and sees Kaitlyn and Nick kissing and he is not happy. He hates seeing Kaitlyn getting so close to the other guys – especially Nick.

Kaitlyn heads back in to the other room and sits down with the guys and tells them that Ian has left, she fills them in on what Ian said to her and how offended she was. After she is done, Chris Harrison interrupts and says that it is time for the rose ceremony – he whisks Kaitlyn away.

It’s time for the next rose ceremony, which is being held at The Alamo. Nick, Marcus, and Ben H. already received date roses. The guys line up and Kaitlyn passes out roses to: Jared, Chris, JJ, Joe, Ben Z, and Tanner. So, Josh and Justin are officially eliminated. After they say their goodbyes, Chris Harrison arrives and announces that tomorrow Kaitlyn and the rest of the guys are heading to Dublin, Ireland.

Kaitlyn and her guys travel to Ireland. They check into their hotel and they all have their fingers crossed that they will receive a Dublin date. In the hotel, the guys begin pouring drinks. Kaitlyn surprises them and says that she has come to take the first guy on a 1-on-1 date. She tells Nick that if he wants to join her then he has 10 minutes to go upstairs and get ready. Nick rushes to get ready for the date, and it’s obvious that the other guys are NOT happy that he just scored a solo date with The Bachelorette.

Kaitlyn and Nick head outside and begin exploring Dublin together. They head to the park and stop every three minutes on their walk to make out. They come across a flock of pigeons and Kaitlyn begins panicking. Apparently, she is deathly afraid of birds. Nick jokes that they will never be able to go to a park again, after how ridiculously scared she was of the birds. Afterwards, they check out some street performers and an Irish dance, and then they make out some more. Nick jokes that their “physical connection is rock solid.” They head to an official Irish pub for drinks, and chat and get to know each other some more.

Meanwhile, back at the hotel, another date card arrives. Tanner, Jared Ben Z, Ben H, Shawn, and Chris are going on the next group date. JJ and Joe are not happy because their names were left off from the date card. That means that they will have to go on an awkward 2-on-1 date with each other and Kaitlyn.

Kaitlyn and Nick Viall are still on their 1-on-1 date. They sit down for a romantic candle lit dinner together. Nick makes a toast and thanks Kaitlyn for picking him to go on a 1-on-1 date in Ireland, and for putting herself on the line and letting him join the show late. Kaitlyn admits while they are talking that she is upset about people thinking and saying bad things about Nick – she really trusts him and likes him. Kaitlyn believes in everything that they have and she is without a doubt falling for him already.

After dinner, Kaitlyn invites Nik back to her hotel suite so that they can make out some more. They head in to Kaitlyn’s bedroom and lock out the camera guy. But they leave their microphones on so that we can all listen to them having sex. Meanwhile, back at the guys’ hotel, Shawn and Jared are sitting around discussing how much they don’t trust Nick.

The guys head out on their Dublin group date, and they are a little confused when they arrive and Chris Harrison is waiting for them – not Kaitlyn. Chris informs the guys that “the worst has happened and Kaitlyn is dead for today.” The guys are going to have to celebrate Kaitlyn’s death with a traditional Irish wake. Chris takes them all in to an Irish pub, where Kaitlyn is lying in a coffin. She is a horrible fake dead person though – because she can’t stop laughing.

Chris Harrison tells the guys that in true Irish wake fashion, each one of the guys will have to stand up and say a eulogy. Tanner and Jared both recite poems about Kaitlyn, which sound a lot like Dr. Seuss books. Chris sings a song about Kaitlyn, and gives her a dead flower. Shawn makes a horrible suicide joke, and says that Kaitlyn must have killed herself because she had to spend the whole day with Nick Viall yesterday. Ben Z is a little upset because Kaitlyn lying in the coffin reminds him of his mother’s funeral. He asks the other guys to leave so that he can say his eulogy. He tells Kaitlyn that he didn’t write a joke and she will “always be in his heart.” Kaitlyn is thrilled with her fake funeral. She says that all of the guys “nailed it.”

After Kaitlyn’s fake funeral, she has a cocktail party with the guys. Ben Z sits down for some alone time with Kaitlyn and confesses that the coffin and eulogy was super hard for him – Kaitlyn apologizes if he felt uncomfortable. Jared steals some time with Kaitlyn next. He reassures her that he meant everything he said the last time that they saw each other and he is definitely falling in love with her. After the group date, Kaitlyn passes out the date rose to Jared.

Shawn is obviously upset because he was certain that he was getting the rose. Jared and Kaitlyn leave to have a 1-on-1 date together, and Shawn sits there and broods over why Kaitlyn told him “he was the one,” but didn’t give him the group date rose. He needed some sort of validation, and he is tired of Kaitlyn sending him mixed signals. Meanwhile, Kaitlyn and Jared head to a church to enjoy a private concert – they slow dance and are serenaded by The Cranberries.

Back at the party, Shawn Booth is furious. He rants to one of The Bachelor camera guys that he loves Kaitlyn but she is pushing him away – he doesn’t want to do this anymore, and he feels like he is about to cry. He reveals that the other night Kaitlyn came to his hotel room and slept in there with him the whole night and told him that “he was the one.” Now, he feels like it was all BS because she gave Jared the rose. Shawn heads back to the hotel after the date and is determined to find Kaitlyn – he knocks on her hotel room door and walks in and surprises Kaitlyn. He sits down with her and tells her that they need to talk. Kaitlyn begins panicking because she thinks that Shawn knows that she had sex with Nick.