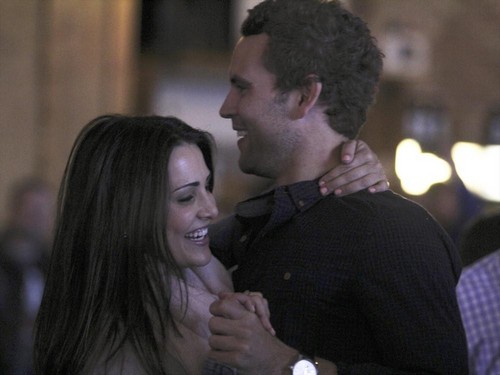 According to Bachelorette 2015 spoilers from Reality Steve, Nick Viall arrived in New York City where Kaitlyn and her guys were filming a rap battle group date. It seems like every season a contestant shows up and pleads to join the show (remember Chris Bukowski begging Andi Dorfman?), but generally the Bachelorette or Bachelor shuts them down and sends them home. However, it looks like Kaitlyn Bristowe made Bachelorette history and actually allowed Nick to join the show. Bachelorette 2015 spoilers tease that after the group date Kaitlyn Bristowe and Nick were spotted making out at Chelsea Piers.

Nick Viall isn’t exactly charismatic, and he fought with the rest of the guys on Andi’s season non-stop. So, it will definitely be interesting to see what kind of drama he stirs up on Season 11. Frankly, we are kind of shocked that Kaitlyn would allow Nick to join her season, maybe she didn’t watch the show in 2014 and doesn’t know that Nick Viall turned in to a stage five clinger and totally exposed Andi on live television?