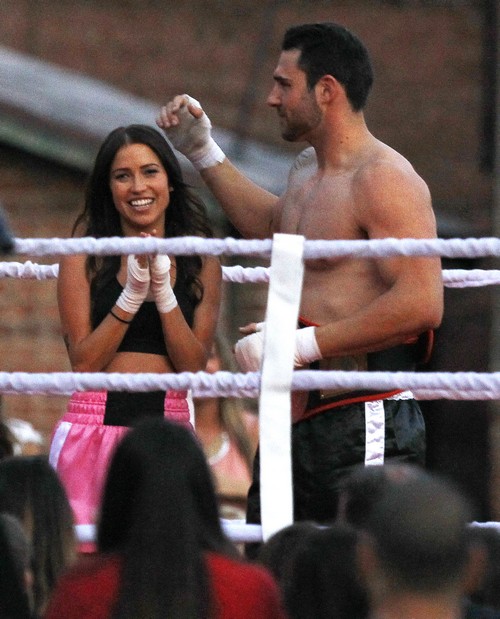 Does Kaitlyn Bristowe already have a boyfriend? The Bachelorette 2015 spoilers were revealed earlier this month and fans of the ABC reality TV dating show were shocked when it was announced that there would be two Bachelorettes – Kaitlyn Bristowe and Britt Nilsson. Kaitlyn was the obvious fan favorite, so fans were thrilled when blogger Reality Steve leaked spoilers that the 25 guys has chosen Kaitlyn as the next Bachelorette, over Britt Nilsson. But, fans of Kaitlyn’s may be second-guess throwing their support behind the Canadian, because it turns out she is a total fraud and already has a boyfriend, Trevor Partlow!

According to an all new report from Star Magazine, Kaitlyn Bristowe had a boyfriend back home when she joined The Bachelor and began romancing Chris Soules – and they are still together! The March 30th edition of Star reveals, “Kaitlyn was already involved in a serious relationship when she filmed The Bachelor last fall, and she returned home to her boyfriend before she began filming The Bachelorette. Kaitlyn has been dating handsome firefighter Trevor Partlo for a year in their hometown of Vancouver.”

Star Magazine’s inside source went on to say that Kaitlyn Bristowe only joined The Bachelor because she wanted to be famous – and Trevor is totally okay with that. Apparently when Kaitlyn returned home she told her boyfriend that “the whole thing was a joke and she only seen Chris 9 times,” so he wasn’t even upset about her canoodling with another man on national television. The source went on to explain, “I know Kaitlyn has told Trevor in the past that she loves him, but she’s a free spirit and she can also be very manipulative. I have no doubt that actually finding a husband on The Bachelorette will be the last thing on Kaitlyn’s mind.”

Well, it looks like Bachelor producers have been duped again. Last year Andi Dorfman seemed like the perfect Bachelorette until it become clear she was looking for fame and a paycheck – not a husband. Now, it turns out spunky and down-to-Earth Kaitlyn Bristowe is just as bad as Andi, if not worse – because she has a boyfriend back home! Are you as shocked as we are that Kaitlyn Bristowe is a fraud and has a boyfriend? Let us know what you think in the comments below! Come back to CDL daily for all of you hot The Bachelorette 2015 spoilers, news and rumors!