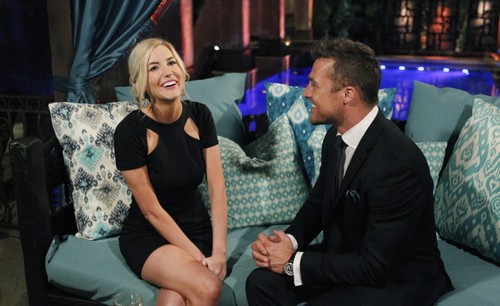 Is Chris Soules’ new fianceé Whitney Bischoff pregnant with his baby? Generally after a couple gets engaged on The Bachelor, they begin making wedding plans – but Chris Soules and Whitney Bischoff have already revealed they have no intention of getting married anytime soon. Just because they aren’t planning a wedding does not mean that they are not sleeping together – or Whitney Bischoff isn’t already pregnant.

According to a new report from Life & Style Magazine, Whitney Bischoff is pregnant with Chris Soules’s baby. Considering Whitney had baby-fever months ago when she was filming The Bachelor, even took Chris to the fertility clinic where she worked on one of their dates, and gushed about how “fricken cute” her and Chris’ babies were going to be – she should be thrilled by the pregnancy and her baby bump. But, that’s not the case.

Instead of heading home to Iowa and starting a family like Chris Soules promised Whitney Bischoff – he decided to join Dancing With The Stars instead, because he got a little taste of Hollywood and didn’t want to return to his mundane life on the farm. Of course with Chris Soules’ new found fame – came new girls, and he apparently has quite the roaming eye. Multiple sources are reporting a hot and steamy affair brewing between Chris and his DWTS partner Witney Carson.

The latest edition of Life &Style Magazine teases, “Whitney feels like she’s already been dumped. And that means her worst fear could become a reality: She could end up pregnant and alone.” Chris Soules is turning out to be nothing like The Bachelor that we thought we knew, so at this point nothing he did would surprise us. If Whitney Bischoff is pregnant – will Chris take her home to Iowa and marry her like he promised? What do you think of the rumors claiming Chris is cheating on his pregnant fiancée with Witney Carson? Let us know what you think in the comments below and don’t forget to check CDL tomorrow for more Bachelor and Bachelorette spoilers and news.