Chris Soules and Whitney Bischoff Cheating Update: Bachelor Wedding Off, Living Separate Lives, Only In It For Fame? 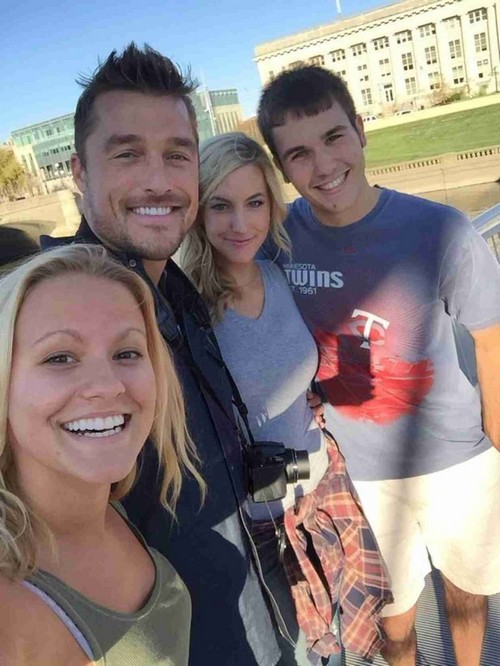 The Bachelor 2015 Chris Soules gave his final rose to Whitney Bischoff during the Season 19 finale of the ABC reality TV dating show, and got down on one knee and proposed to the Chicago fertility nurse. But by now rumors are that both Whitney Bischoff and Chris Soules are not in love and are cheating on each other, only together to play the fame game in California. This season on The Bachelor Chris made it very clear he was searching for a wife to take home to his farm in Iowa, and considering the fact that Whitney announced during the Season 19 premiere that she couldn’t wait to move to Arlington and start popping out Chris’s babies – she was the logical choice.

The Bachelor season finale was filmed back in November, and any sparks that Chris Soules and Whitney Bischoff had for each other have come and gone. The Bachelor and his new fiancée have been doing the publicity tour, smiling for the cameras, and gushing about how “in love” they are – but some serious red flags arose when Chris Soules announced they had not set a wedding date and had no intention to. Doesn’t it seem strange that Chris and Whitney had mad wedding fever when they were filming the show, and now they aren’t even setting a date for marriage?

Chris Soules never returned home to his farm in Arlington, Iowa – so he isn’t exactly in need of a farmer’s wife anymore. Like many country boys before him, Chris got a taste of the big city and the limelight…and never looked back. The Bachelor has been living in California since he finished filming The Bachelor and is now working on a new TV show, Dancing With The Stars. Multiple reports have revealed that Chris has been seeing his former fiancée Sheena Schreck, who coincidentally also lives in California. Chris isn’t the only one who is “cheating” though, Whitney has been doing her own thing as well since she arrived in California. According to sources close to Whit and Chris, their relationship has been long over – and they are just milking being in the spotlight.

An insider dished to CDL, “Chris and Whitney’s relationship has been over for a while, they are both seeing other people – but I’m not even sure if you would call it cheating. They love all of the attention and fanfare that comes along with getting engaged on The Bachelor, and they aren’t going to give it up anytime soon or admit that they are no longer together. It’s basically a business arrangement at this point. They may be living together in Cali, but they are living completely separate lives.”

Well, we have seen it happen time and time again on The Bachelor and The Bachelorette. Couple meets, “falls in love,” gets engaged – and pretends to be madly in love while they exhaust all of the opportunities that come along with the gig. Then, when they have milked the spotlight for all it is worth – they go their separate ways. Do you think that Chris Soules and Whitney Bischoff are one of those couples, or are you still holding on to hope that they will get married? How much longer will they keep up their business arrangement? Will Whitney turn in to Andi Dorfman and try to land another TV show or use her “Bachelor Fame” to pimp out products on Twitter? Let us know what you think in the comments below!